The increasingly harsh public discourse in the current election campaign has Israel’s democracy teetering between freedom of expression and freedom to incite. 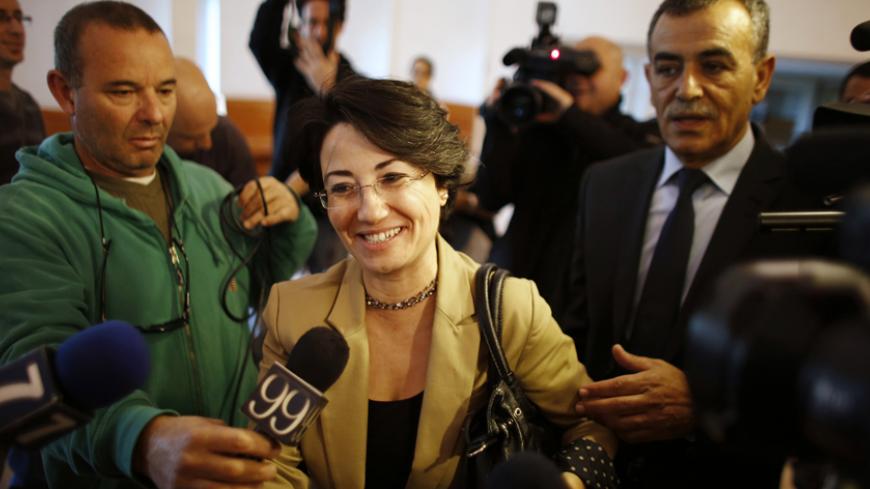 Israeli Arab lawmaker Haneen Zoabi (C) speaks to the media as she enters a hearing at the Supreme Court in Jerusalem, Dec. 27, 2012. - REUTERS/Ammar Awad

On Feb. 17, a short while after the Supreme Court heard arguments against disqualifying Knesset member Haneen Zoabi from running on the United Arab list, participants at the annual Israel Democracy Conference heard arguments from the television anchor Lucy Aharish in favor of Zoabi’s disqualification from the Knesset race.

“Zoabi should demonstrate responsibility toward the Arab society and not incite with harsh words, which provoke Israeli society against its Arab neighbors,” said the successful Arab-Israeli journalist. “The minute you know what your words can do to an entire society, to 20% of this state, you will learn how to talk,” Aharish lashed out. “I am a proud Arab living in this state,” she continued, visibly agitated. “I do not apologize for being an Arab. I do not apologize for being a Muslim.” According to the platform of the party headed by Avigdor Liberman, the foreign minister of Aharish's state, however, had she chosen to live in the Arab town of Umm al-Fahm or in one of the villages of the Triangle in the north, even an apology would not have saved her from being separated from her country.

These days, giant posters plastered across Israel touting Yisrael Beitenu, Avigdor Liberman’s party, bear the slogan “Ariel for Israel, Umm al-Fahm for Palestine.” The campaign is designed to promote Liberman's plan for land swaps. Two weeks ago, on Feb. 4, it was only through the intervention of the Central Election Committee that the party was prevented from handing out free copies of the satirical French magazine "Charlie Hebdo," the special edition following the Paris massacre in January, mocking the Prophet Muhammad. The committee chairman, Justice Salim Joubran, wrote in his ruling, “The various parties would be better off focusing their efforts on bringing the Jewish and Arab societies closer to each other and not in stirring up and exploiting the tensions that exist between them.”

The anti-Muslim Arab election propaganda, as well as Zoabi’s comments, which led to the petition for banning her Knesset candidacy, clearly reflect the radicalization of the political debate typical of this election campaign. As the election draws nearer, the criticism grows more vile, and the delegitimization of rivals, regardless of race or nationality, becomes more virulent.

Last week, the Likud Party distributed a video claiming “the left will give in to terrorism” and “enable the Islamic State to take over Israel.” An animated clip being distributed by the Samaria Settlement Council portrays the Europeans as Nazis and describes left-wing Israeli nongovernmental organizations as Jews collaborating with them out of naked greed. The video shows a person, Herr Sturmer, thumbing through a newspaper titled “Hasmol” [a play on the word “small,” which means “left” in Hebrew], which looks like the Israeli daily Haaretz. A stooped Jew with a long nose walks into Herr Sturmer’s office, and in return for some euro coins, supplies him with a blood libel about Israeli troops who kill Palestinian babies.

The chairwoman of the left-wing Meretz Party, Knesset member Zehava Gal-On, who also spoke at the democracy conference, blamed Prime Minister Benjamin Netanyahu personally for the video, asserting, “He’s the one who transferred public funds to the settlement umbrella organization, the Yesha Council, and to this shameful organization.”

The co-chair of the Zionist Camp, Isaac Herzog, said at the democracy conference that at one point in time, those who introduced fear, hatred and racism into the public discourse were on the margins of society, whereas today they are legitimate allies. Herzog also shot his sling at the prime minister’s office. “Bibi is destroying democracy,” said Herzog, who spent two years in a Netanyahu government, between 2009 and 2011.

Herzog and his party co-chair, Knesset member Tzipi Livni, who until December was a senior member of the Netanyahu government, both accused the prime minister of adopting the attitude of “the state is me” and of publicly portraying his critics as collaborators with the enemy against the state. “In the last elections, ‘peace’ turned into a dirty word,” said Netanyahu’s former chief negotiator with the Palestinians, warning, “If we don't fight for that, the word ‘democracy’ will turn into a dirty word in the next election.” Nonetheless, both heads of the Zionist Camp supported Zoabi’s disqualification and did not respond to a proposal to rescind the citizenship of certain Arab Israelis in some cases.

Former Likud Knesset member and government minister Dan Meridor expressed concern about what he called “a major change in the public discourse.” According to Meridor, at a time of national tension, there’s nothing easier than stirring up emotions and inciting the public against those who don’t toe the line. A few days earlier, Netanyahu had decided, for ideological reasons, to disqualify three judges appointed to serve on the panels of the Israel Prize for literature and film. In response, Dan Margalit, senior commentator for Yisrael Hayom, the Netanyahu family’s court paper, tweeted, “Disqualifying Israel Prize judges after they were already named was Bibi-style Zhdanovism.” The next day, Margalit told Galei Israel, the radio station of West Bank settlers, “I know how dictatorships start out.”

Before reversing his dismissal of the judges, at the instruction of Attorney General Yehuda Weinstein, Netanyahu wrote on his Facebook page, “A small, closed group of people with radical views passes the baton from hand to hand and maintains control over the selection of the Israel Prize laureates.” Netanyahu’s words reflect a pervasive claim in right-wing circles that the leftist elite, usually of Ashkenazi origin, exclude the right from societal power centers.

This was also the spirit of right-wing activist and publicist Shimon Riklin, who addressed the democracy conference. He argued that despite the right having been in power for many years, the media and academia are controlled by the left.

Israeli society is teetering on an increasingly narrow tightrope between freedom of expression and freedom to incite. The harsh rhetoric of the election campaign is fraying the rope. Nonetheless, the objection by Weinstein — who has never been suspected of hating Netanyahu or blamed for “leftism” — to Zoabi’s disqualification (and to that of right-wing radical Baruch Marzel) and the Supreme Court's decision Feb. 18 to overturn the ruling of the Central Election Committee and to allow the two to run for the Knesset prove that the announcement of the death of Israeli democracy was perhaps a bit premature.

Note: For several years, ​he author served as correspondent for Haaretz- which organized the democracy conference.