In an exclusive interview with Al-Monitor, Israel’s Regional Cooperation Minister Esawi Frej said that while a strong Palestinian Authority is "of course a Palestinian interest ... it is also an Israeli and international interest." 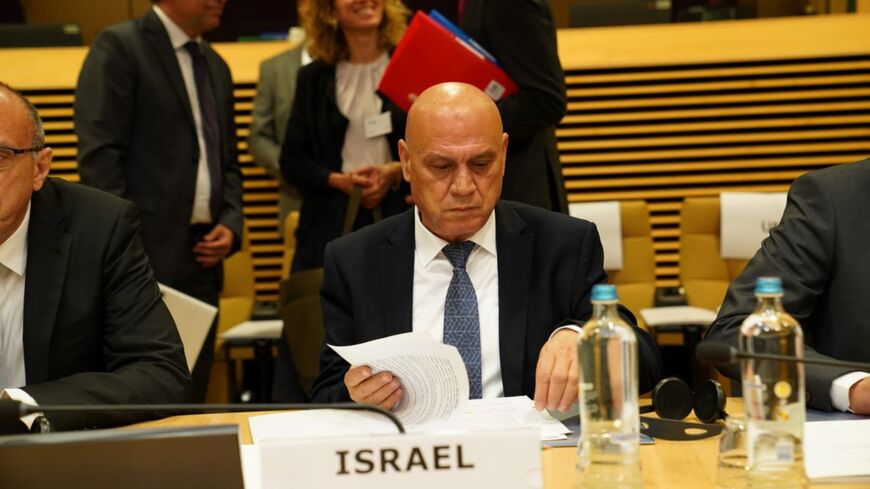 Esawi Frej, Israel's minister for regional cooperation, participates at the Spring Meeting of the AHCL (international forum for donor countries for the Palestinians), in Brussels, Belgium, on May 10, 2022. - Ori Loven

The meeting took place at the European Commission building in Brussels, hosted by the European Union High Representative for Foreign and Security Affairs Josep Borrell and chaired by the Norwegian Minister of Foreign Affairs Anniken Huitfeldt. The AHCL last met in November 2021 in Oslo. Earlier in the day, just across the street, Borrell hosted the sixth meeting of the European Union-organized conference on supporting Syria and the region. Several ministers (not Frej, of course) participated at both events.

Frej arrived in Brussels May 9, and conducted a series of diplomatic meetings ahead of the May 10 AHCL session. He met separately both with Palestinian Prime Minister Mohammed Shtayyeh and with Palestinian Finance Minister Shukri Bishara.

Ahead of the May 10 session, Frej tweeted, "'We share the same air, the same water and the same land, so we must take care of each other,' my friend, Palestinian Finance Minister Bishara, told me today. I came to Brussels for the conference of countries donors to the Palestinians convened in order to confront and overcome the difficulties and to continue working together to build a better future for both peoples and the region."

Frej further said that his meetings in Brussels were all very positive, but "within the Palestinian street, things are far less positive. For that, the Authority needs to be economically strong. This is not the case. Violence does not break out just like that. There is campaign of incitement, in schools, on social media, with fake news, which we must work against together." He also said that the issue of incitement bothers the Israeli government tremendously, and "my Palestinian interlocutors understand the importance of solving that, but are taken aback when disputed topics become pre-conditions for advancing."

When Frej's Meretz party entered the government, it agreed not to touch the issue of diplomatic negotiations. But, he said, "On the other hand, the government agreed to advance economic issues for the Palestinians and to strengthen the Palestinian Authority. The prime minister [Naftali Bennett] is hundred percent behind me on this. … So let’s start with confidence-building measures. Other things will then follow."

The list of confidence-building measures now includes some 20,000 work permits for Gaza workers, the highest number of permits granted in the past 15 years. Another first was the decision to offer 500 work permits to West Bank Palestinians in high tech. Israel had also agreed to digitalize the tax invoices by Palestinian merchants, meaning that the Palestinian Authority could recoup the taxes collected on its behalf by Israeli authorities much easier and faster. Israel is taking measures for Palestinian workers to receive their salaries directly in their bank accounts, and not cash in hand, as a way to guarantee their social rights. Israel has also expanded door-to-door shipping of goods, including a pilot project for transferring containers through the Allenby Israel-Jordan-West Bank Crossing.

Frej says he does not believe the Joint Economic Committee [JEC], set up in the framework of the 1994 Paris Protocol, will convene anytime soon. For Prime Minister Naftali Bennett, convening this committee would suggest Israel reopens negotiations with the Palestinians, and this is something his party cannot sponsor. Still, Frej says that the initiatives he is promoting would have been discussed should the JEC have been convened. "We are advancing classic JEC issues on the ground, just without the JEC official framework," he says.

Addressing his counterparts at the AHCL meeting, Frej warned, "If  the international community does not provide financial support, if the Palestinian Authority does not carry out reforms to improve its financial management, fight corruption, and end incitement, and if Israel does not continue to increase and expand measures to strengthen the Palestinian economy, the train will head off the cliff, and the result will be a catastrophe that will be felt across the region. If all this happens, it will be extremely costly to repair."