The move comes amid other steps by the government of Prime Minister Naftali Bennett to prevent the collapse of the Palestinian economy. 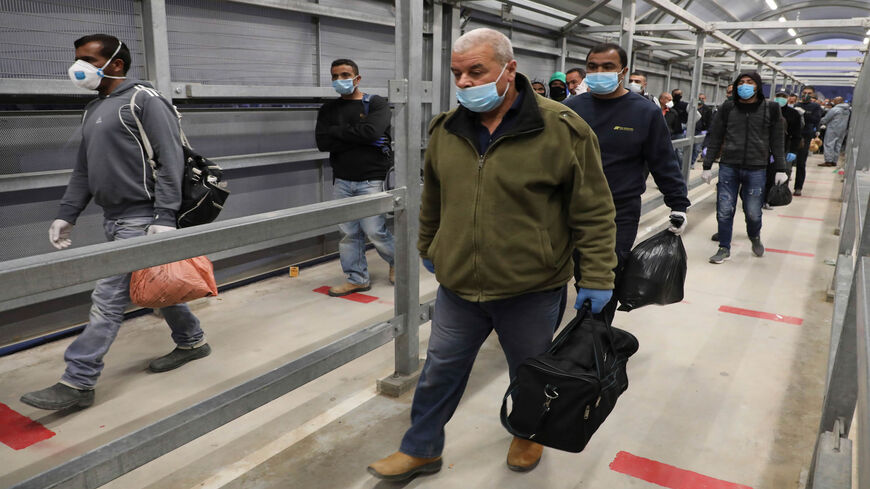 Cabinet ministers approved Aug. 1 the increase of the number of work permits for West Bank Palestinians to work in Israel by 15,000. These permits will be handed to Palestinians working in the Israeli construction sector. After the Cabinet approval, Defense Minister Benny Gantz tweeted that the decision reached by the Cabinet was the result of an agreement between the Housing, Finance, Defense and Regional Cooperation ministries. He continued, “This is an important step that will strengthen the Palestinian and Israeli economies and our shared interests.”

The initiative to increase the number of work permits to a total of some 106,000, was first announced by Regional Cooperation Minister Issawi Frej, who had reportedly developed the plan together with Housing Minister Ze’ev Elkin. Following Frej’s announcement, the Coordinator of Government Activities in the Territories announced July 28 it will issue some 16,000 permits for Palestinian West Bank laborers to work in the construction and hotel industries, 15,000 in construction and 1,000 in the tourism sector.

The decision about the work permits comes amid steps that could indicate a shift in Israel’s official policy vis-a-vis Palestinian leadership on the West Bank, compared with the allegedly hostile policy championed by the former government of Benjamin Netanyahu. Reports say that while Prime Minister Naftali Bennett is considered pro-settler, he is also worried about the effects of a possible collapse of the Palestinian economy, hence his willingness to move in that realm.

The two meetings yielded several important decisions. On the health front, Israel agreed to recognize the Palestinian vaccination certificate. In other words, Palestinians vaccinated in West Bank hospitals will now be recognized by Israel as immunized. Israel also agreed to facilitate the passage of patients from the Gaza Strip on their way to hospitals in the West Bank, so that they will not have to walk or be carried on a stretcher through the Erez crossing point. Rather, ambulances will ferry the patients directly through the crossings. In addition, Israel agreed to supply health services to Palestinian schools in East Jerusalem.

The July 28 meetings took place at Hotel Yehuda in Jerusalem. Much like the work permits, it was also at the initiative of Frej. Since taking office, Frej has been pushing for the resumption of the long-dormant relations with the political leadership of the PA. After the two meetings, the office of Frej said it will follow up on agreements reached, and will set up follow-up meetings between the ministers in the coming months.

The office also said it will initiate more ministerial meetings with Palestinian counterparts. Frej told Israeli press, “It’s not just [those two]. There will be other meetings with the transportation ministers and the economy ministers. The process is continuing. There is goodwill and commitment on both sides. We are going to discuss civilian matters to the benefit of both sides.”

A report published July 6 revealed that Frej has been in close contact with senior Palestinian officials, including Civil Affairs Minister Hussein al-Sheikh, to establish a joint economic committee to advance economic issues and to remove Israeli red tape hindering development projects and economic initiatives by the PA. The Palestinians had already indicated two pressing economic issues that they would like to present to the committee: a request for some 17,000 Israeli work permits for West Bank Palestinian laborers and and the advancement of the establishment of a Palestinian Petrol Authority.

A similar body was in fact established in the framework of the 1994 Paris Protocol signed between Israel and the PLO, formulating bilateral economic relations. Still, the committee, designed to advance and develop the Palestinian economy, stopped convening and functioning in 2009.

Already on July 19, before the moves announced by Frej, Gantz held a telephone conversation with Palestinian President Mahmoud Abbas. It was the first known conversation in several years between the Palestinian leader and a high-placed Israeli minister. The last conversation between seniors on both sides took place in 2017, when Abbas conversed with former Prime Minister Benjamin Netanyahu. Gantz congratulated Abbas on Eid al-Adha. The two reportedly spoke also about operational issues, paving the way for the decision on the additional work permits.

President Isaac Herzog and Public Security Minister Omer Bar-Lev also called Abbas July 19, to extend their well-wishes on Eid al-Adha. For Herzog, it was his second conversation with Abbas since taking office; Abbas had called him shortly after his swearing-in ceremony to congratulate him.