Instead of plans for a new Jewish neighborhood across the Green Line, Meretz Minister Esawi Frej proposes to rebuild the Atarot Airport so that it serves both Israelis and Palestinians. 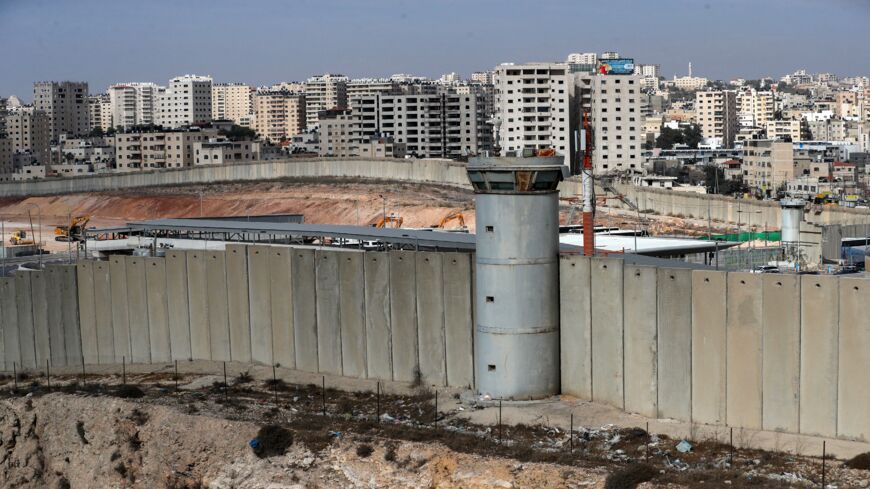 A general view shows a section of Israel's controversial separation wall (bottom) and machinery (L) working on the tarmac of the former Atarot Airport, which has been closed to civilian traffic since the breakout of the second Palestinian intifada in 2000, between the West Bank city of Ramallah and Israel-annexed east Jerusalem on Nov. 25, 2021. - AHMAD GHARABLI/AFP via Getty Images

Israel’s District Planning and Building Committee discussed on Dec. 6 plans proposed by the Jerusalem municipality to establish a new neighborhood, Atarot, at the site of the abandoned airport in east Jerusalem. The committee decided that feasibility studies must be done before the process can continue. In other words, the committee halted the process of advancing this plan, apparently at least for one year.

The Atarot plans include some 9,000 new housing units, green areas, entertainment, public spaces and commerce. These plans for a new Jewish neighborhood on the other side of the Green Line are controversial, which is why the Biden administration seems to be furious and why left-wing ministers in Naftali Bennett’s Cabinet are trying to push forward other options for the area.

Development of the site was actually blocked by former Prime Minister Benjamin Netanyahu for at least a decade, including during the Trump administration. Recently, at a meeting of its local planning committee, the Jerusalem municipality brought back the plans to the table. Subsequently, Secretary of State Antony Blinken on Dec. 2 called Prime Minister Naftali Bennett to express his dismay. Reports said Jerusalem assured Washington that construction of the neighborhood will be suspended.

It is also worth noting that according to reports, new American Ambassador to Israel Thomas Nides rescheduled his presentation of credentials to Israeli President Isaac Herzog. Apparently, he advanced it to Dec. 5 rather than Dec. 6, when a group of new ambassadors will be presenting their credentials, so as to avoid having the ceremony coincide with the meeting of the District Planning and Building Committee to discuss plans for the new Jewish neighborhood in east Jerusalem.

While the Jerusalem municipality is hard at work pushing forward with these plans, Regional Cooperation Minister Esawi Frej of Meretz has plans of his own for the site. He wants to see the renovation of an abandoned airfield there, built by the British during the Mandate period almost a century ago. “I will work to advance a plan put together by a team of experts, led by Nir Dagan, a pilot and former CEO of Arkia Airlines, to turn Atarot into a joint Israeli-Palestinian airport,” Frej announced last week.

Supporting Frej’s idea is none other than Transportation Minister Merav Michaeli of the Labor party. According to Yedioth Ahronoth, the minister is examining a separate initiative to reopen the Atarot Airport and operate it as a joint Israel and Palestinian facility, rather than building a new neighborhood there. A separate special committee established by the minister to build a new civilian airport for the country even asked the District Planning Committee to postpone its discussion so that it could assess the feasibility of reopening the Atarot Airport outside Jerusalem instead of building a new airport at Ramat David in the Jezreel Valley. As of now, Palestinians are dependent on Jordanian airports to fly in and out of the Palestinian territories. Alternately, they can obtain special permission to fly in and out of the country by way of Israel’s Ben Gurion Airport.

"As Israel's aviation needs increase, with Ben Gurion Airport very close to its capacity threshold, and as the decision on the location of Israel's additional airport continues to linger, the existing resource of a ready airfield in Atarot must be utilized and reopened as a joint Israeli and Palestinian airport. The reconstruction of the field and its opening will address the aviation needs of the Jerusalem metropolitan area as well as the need of the Palestinians for an air entry and exit gate," Frej told Al-Monitor.

As for plans to construct a new Jewish neighborhood in Atarot, he said, “It is wrong to destroy strategic infrastructures for housing units. Atarot Airport, which can be reconstructed in a short period of time, will serve as a secondary Israeli airport with a Palestinian terminal. The airport could serve at least 5 million passengers a year. It's good for the Israeli economy, it's good for the Jerusalem economy, and it's good for the Palestinians who currently have no aviation exit gate to the world. All this, while creating a proper security envelope that will ensure the safety of the field and passengers."

Evidently, the development of Atarot Airport is an ambitious project with challenges of its own. Israel has wanted to convert Atarot into an international airport ever since it was first annexed to Israel after the 1967 Six-Day War, but no international airline agreed to fly there. As a result, it was used exclusively for internal flights until it was closed entirely in 2000 as a result of the second intifada. It has remained abandoned ever since. This past history raises an important question: Will the current initiative to convert it into a joint airport for Palestinians and Israelis convince international airlines to use it? For the moment, the District Committee said it was not interested in advancing that plan. Frej, for his part, is not giving up.

While the Israeli left supports the initiative, the right is sharply opposed to it. They would prefer to see a Jewish neighborhood on the contested site. On the left, Knesset member Mossi Raz of Meretz tweeted, “I support the ingenious idea of my colleague Minister Esawi Frej, to restore Atarot’s past glory and establish a joint Israeli-Palestinian airport at the site.” In contrast, right-wing journalist Yinon Magal, a vocal supporter of former Prime Minister Netanyahu, responded with a tweet of his own: “Either Minister Michaeli is trying to use her entire ministry to advance some bizarre political spin, or she doesn’t realize that what is needed is an international airport, and that Atarot in no way meets the necessary criteria.”

Another former Knesset member, professor Aryeh Eldad, known for his right-wing positions and support for the Greater Land of Israel, shared his opposition to the plan during a conversation with Al-Monitor: “It is impossible to place an international airport there for purely practical reasons, given that there are tall buildings in the adjacent village and surrounding areas. As such, the proposal has nothing to do with transportation. It is entirely political. Furthermore, it is practically impossible for it (Atarot) to serve as an alternative to Ben Gurion Airport because large airliners will not be able to take off and land there. It could only be used by smaller aircraft. At the same time, it is also important to ask whether there should even be an airport in Jerusalem that can be accessed by Palestinians. I am opposed to that too. The most important use of the land there would be to build a Jewish neighborhood. I believe in ‘judaizing’ Jerusalem. We must help the Jewish population of Jerusalem by providing a response to the negative migration of Jews from the city, especially since the Arab population is growing.”