The government of Naftali Bennett would like to shelve plans for constructing the Atarot Jerusalem neighborhood on the other side of the Green Line, yet it is facing a hard-core Jerusalem municipality that is adamant to advance the plan. 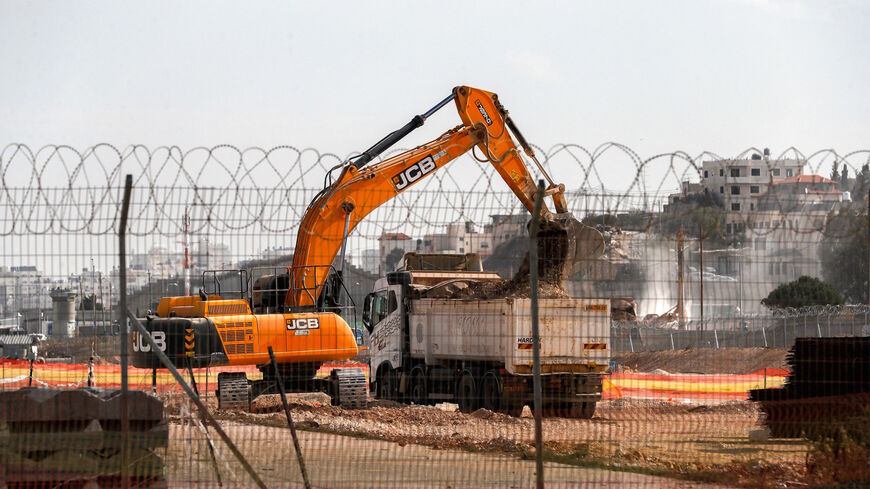 Machinery working on the tarmac of the former Atarot airport (Jerusalem International Airport) is seen, near the village of Qalandia between the West Bank city of Ramallah and Israel-annexed East Jerusalem, Nov. 25, 2021. - Ahmad Gharabli/AFP via Getty Images

Jerusalem’s local planning committee decided Nov. 24 to authorize an old plan to build the Atarot neighborhood in north Jerusalem. The new residential neighborhood would be located at the site of the abandoned Atarot airport, with an area of 1,243 dunams (307 acres), and would consist of 1,000 housing units, in addition to hotels, public buildings, public open land, and industrial and commercial zones. The plan also suggests creating a zone for industry and commerce adjacent to Route 45, and maintaining the historic terminal building that still stands in the area of the Atarot airport.

This is a plan that was formulated years ago, but each time it was brought to a vote, the vote was postponed because of American opposition. The reason for the opposition is that this is territory located on the other side of the Green Line, in an area between Jerusalem and Palestinian villages.

The last time the plan was brought to a vote, it was then-Prime Minister Benjamin Netanyahu who prevented its discussion, in response to a direct request from the Trump administration. In the “deal of the century” formulated by former President Donald Trump and his son-in-law/White House adviser Jared Kushner, this area was actually intended for a Palestinian tourism zone.

The city of Jerusalem suffers from a serious shortage of housing, for all sectors, especially the ultra-Orthodox and the Arab sectors, and the Atarot area in the north is considered one of the land reserves that could be used to solve this problem. The place was the site of a Jewish village that was established in 1919. It was destroyed during the 1948 War of Independence, and conquered by Jordanian and Palestinian forces from the region. In the Six-Day War it was reconquered and incorporated into the municipal territory of Jerusalem. On part of it an industrial area was established, which is a source of employment for many Palestinians from the Ramallah area, and in another part the new neighborhood is planned.

Ofer Berkovitz, a member of the Jerusalem city council who has pushed for construction at Atarot for many years, responded that this is a historic authorization for construction in Jerusalem. “There was huge pessimism at the beginning of the road, that we won’t be able to establish the neighborhood, but now the day has come. We are very proud. It’s a critical move for young people, for lowering housing prices, for preserving the green lungs of the city.  I’ll continue to work so that the regional commission authorizes the plan and doesn’t give in to external dictates,” Berkovitz said.

On the other hand, the Peace Now anti-occupation movement condemned the authorization, saying, “The housing minister dropped a diplomatic bomb, without any debate in public or even in the government. This is a plan that sabotages the chance for peace on the basis of two nations for two peoples. The planned neighborhood is at the heart of the Palestinian urban continuity between Ramallah and East Jerusalem, and thus prevents the possibility of a Palestinian state with East Jerusalem as its capital. The plan is not a decree of fate and wasn’t ‘inherited’ from previous governments. It can still be stopped and not be authorized by the regional commission in a week and a half. If the plan isn’t removed from the agenda, this harsh blow to peace would be a disgrace to members of the coalition — Meretz, Yesh Atid and Labor.”

The reports further stated that during the previous government, Netanyahu tried to advance the construction of the neighborhood in Atarot, but was blocked by the Trump administration. The Israeli premier then offered to build in that area 4,000 housing units for Palestinians, and 4,000 for Israelis, but the Trump administration rejected the plan since this area was defined as part of a future Palestinian state according to Trump’s plan.

However, upon checking, Al-Monitor discovered that in contradiction to these reports, the topic has so far not been removed from the agenda of the regional planning committee, and would be discussed at its next meeting, in a week. In fact, Deputy Mayor Aryeh King told Al-Monitor that the topic will be raised as planned and that municipal representatives will make sure it will not get stuck in the comittee.

King also noted that serving in this government, among others, are Minister Gideon Saar, who has authorized construction in East Jerusalem in the past, as well as other ministers who support construction in the city, including Interior Minister Ayelet Shaked and Housing Minister Ze'ev Elkin. He believes that the reports on the message to the American administration were meant to calm the left-wing side of the government, and that in actuality the plan will be authorized and implemented.

According to an Israeli diplomatic source speaking on condition of anonymity, the American administration wondered why the current government can’t reproduce the move Netanyahu and the right-wing government he headed took in blocking such plans at Washington’s request. The answer given to the Americans included an explanation that the local committee is controlled by ultra-Orthodox political parties in the municipality and headed by Eliezer Rauchberger, a member of the ultra-Orthodox Yahadut HaTorah party. According to this explanation, the ultra-Orthodox parties were part of Netanyahu’s government and thus obeyed him, while they are now in the opposition, and work to obstruct the Bennett-Lapid government.

As mentioned, the plan is on the agenda of the regional committee, which is controlled by the Finance Ministry and the Interior Ministry. Heading these two ministries are right-wing Ministers Avigdor Liberman and Shaked, who would find it very difficult to handle the political ramifications of stopping the plan to construct the neighborhood in Atarot.

On the other hand, the left-wing part of the government is angry, and the American administration is putting pressure on the government. In a week we will know how Prime Minister Bennett decides on this issue, which threatens the stability of the coalition.