Another push to make Qalandia Airport a Jewish settlement

The Netanyahu caretaker government has announced its intentions to build 11,000 housing units at the site of the former Qalandia Airport in East Jerusalem. 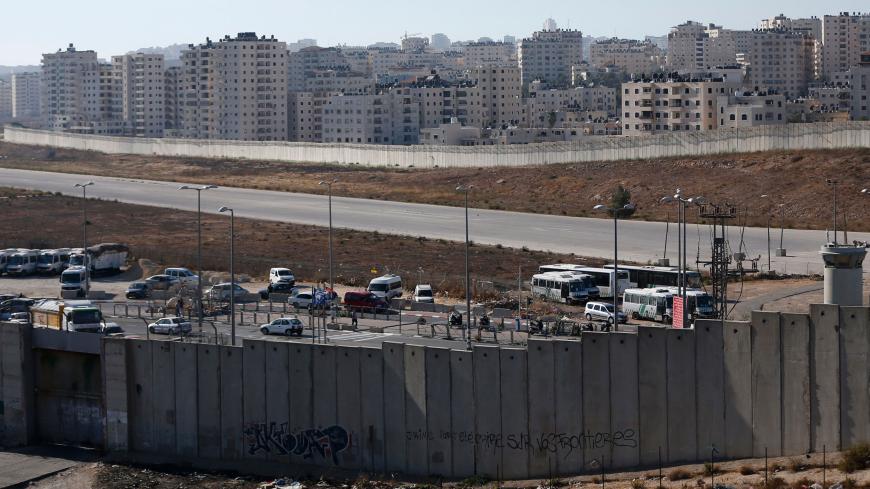 The tarmac of the former Atarot Airport, closed to civilian traffic, seen behind a section of Israel's controversial separation wall near the Qalandia crossing between the West Bank city of Ramallah and Israel-annexed East Jerusalem, July 28, 2016. - AHMAD GHARABLI/AFP via Getty Images

In a move that appears to directly contradict the Donald Trump administration’s Mideast plan, the Israeli Housing Ministry announced Feb. 18 its intention to build 11,000 housing units on the grounds of the runway of the former Jerusalem airport, known as the Qalandia Airport (Atarot Airport).

The US "Peace to Prosperity" plan states: “The State of Israel should allow for the development by the State of Palestine of a special tourism zone in Atarot, in a specific area to be agreed upon by the parties.”

Atarot, according to the plan, “should be a world class tourist zone that should support Muslim tourism to Jerusalem and its holy sites,” and would include restaurants, shops, hotels, cultural centers, and other tourism facilities, along with “state-of-the-art public transportation that provides easy access to and from the holy sites.”

Tufakji further noted that the plan has been repeatedly announced in the past. Israelis "have previously made similar announcements in 2012 and 2017," he added.

Jerusalem-based lawyer Daniel Seidemann, the director of the Terrestrial Jerusalem NGO, told Al-Monitor that it is unlikely that the plan will be implemented in the near future. “I am tempted to say it will not happen anytime soon because they haven’t started planning, and because of objective obstacles, enormous legal complication, its proximity to Ramallah and Kufr Aqab," he said. "If it happens it will be 10 years from now.”

However, Seidemann said that the public statements about the plan to establish settlements reflect the utter lack of Israeli interest in the fate of Palestinians. “The Trump plan in general denationalizes Palestinians of East Jerusalem," he said. "It argues that, ‘OK, you can have your capital in Abu Dis or Kufr Aqab, and if you accept this subjugation you will get crumbs.’ The biggest crumb offered by Trump and company to Palestinians is the tourism zone, and with this announcement, [Israeli Prime Minister Benjamin] Netanyahu wants to take away even this crumb that was thrown to Palestinians.”

The Arab League, Jordan’s Foreign Ministry and others have denounced the Israeli settlement announcement.

Brian Reeves, the spokesman of the anti-occupation group Peace Now, told Al-Monitor that Netanyahu wants to strike another deadly blow to the prospect of a two-state solution. “The planned settlement neighborhood drives a wedge in the heart of the Palestinian urban continuity between Ramallah and East Jerusalem, thus preventing the establishment of a viable Palestinian state with a capital in East Jerusalem," he said. "Netanyahu is dragging Israel into a reality of a binational apartheid state and is putting the Zionist enterprise in jeopardy.”

Seidemann, who has briefed European and other officials, said the EU’s credibility hangs in the balance if the Israelis move ahead with their recent settlement announcements in Qalandia and the E1 area. “If construction proceeds, one of the major victims will be the credibility of the EU," he said. "Everybody agrees with us that the question is whether they have the will to do something about this issue. Netanyahu will not be deterred by words, but by actions.”

Qalandia had been an airport since 1920, and the issue provokes emotional responses. PLO Executive Committee member Hanan Ashrawi tweeted Feb. 18, “Qalandia Airport was that magical place from which as a child I first felt the freedom of flying. Like the rest of Palestinian lands, it is being stolen, violated & distorted to become a symbol of oppression & captivity.”

Nahed Awwad, a Palestinian filmmaker, produced a documentary in 2018 titled “Five Minutes From My Home.” She told Al-Monitor that the research for her film brought her closer to many people who had a direct relation with the former airport. “I talked to former captains, stewards, ticketing officers and even people who used to literally walk from their homes when the plane with their loved ones arrived,” she said.

Awwad also wrote an essay in 2008 in the Jerusalem Quarterly of the Institute for Palestine Studies on the subject titled, “In Search of the Jerusalem Airport.”

It is possible that a Jewish settlement will not be built at Qalandia Airport, but the fact that Israeli officials use the idea of settling in Palestinian areas as fodder for election campaigns is yet another sign of their utter contempt for the Palestinian rights. The Israeli announcement, which contradicts the US peace plan, has not received a single comment from Washington, thus speaking volumes about Trump's collusion with Netanyahu and his right-wing government. The silence shows again that the US peace plan is nothing more than a reworded Israeli dictate for Palestinians.