How one Jerusalem neighborhood has been left to fend for itself

The Jerusalem neighborhood Kufr Aqab has become no-man’s-land, as Israelis who have sovereignty do not provide services to its residents and the Palestinian Authority is not allowed to enter the area. 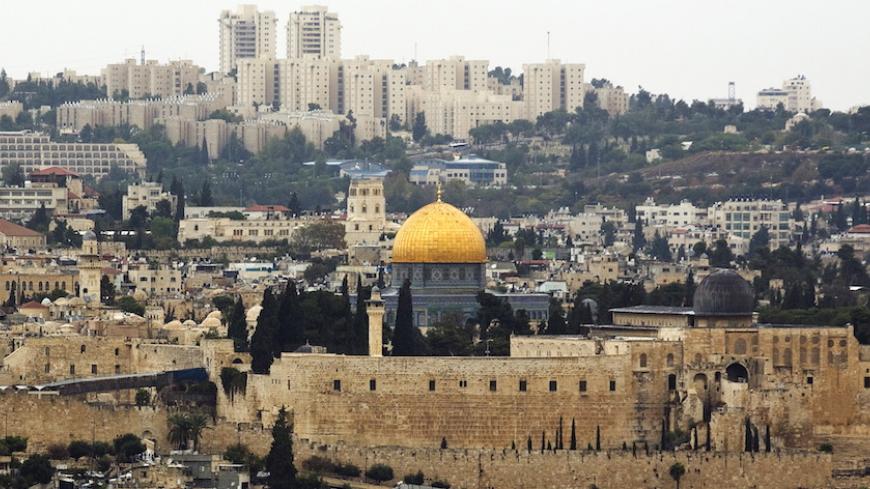 A general view of Jerusalem's Old City shows the Dome of the Rock in the compound known to Muslims as Noble Sanctuary and to Jews as Temple Mount, Oct. 25, 2015. - REUTERS/Amir Cohen

When Tamara and Ala’a got married in 2012, in addition to their wedding in Beit Jala, they held a second ceremony in Jerusalem to ensure that they could register their marriage in the holy city. The couple moved into a small house in the Jerusalem suburb of Beit Safa to make sure that they could legally prove their connection to Jerusalem.

The second wedding and the Jerusalem home were necessary to ensure that the Palestinian couple would not lose their residency permits. But this played out differently. Because Ala’a is from Beit Jala and Tamara from East Jerusalem, the couple could not always be together in the same place. Ala’a came home whenever he managed to obtain a permit, often around Christmas and Easter, while the rest of the year he had to either sneak into Jerusalem or Tamara had to stay at her in-laws.

This complicated arrangement is the result of an Israeli policy aimed at administratively reducing the Arab population of East Jerusalem, by forcing Jerusalemites to constantly have to prove their connection to Jerusalem or else risk losing their right to live in Jerusalem as permanent residents.

After three years, the couple could no longer take it and decided to move to a high-rise apartment building in the north Jerusalem neighborhood of Kufr Aqab. The building is located within the Jerusalem municipal city boundaries, and so Tamara and Ala’a can now prove their connection to Jerusalem. Though Ala’a now has to travel a long way to get to his workplace in Bethlehem, at least they can live together as a family.

The area of the Jerusalem municipality that is situated beyond the wall is in "no-man’s-land." The Israelis who have sovereignty here fail to take their responsibility to provide services to the area and its residents, and the Palestinian Authority (PA) is not allowed to enter the area, leaving it unregulated with garbage often uncollected and water filling the streets. Yet many people want to live here. While living conditions are difficult, this is the only location in Palestine and Israel in which couples such as Tamara and Ala’a can live together without the interference of the Israeli authorities.

The popularity of Kufr Aqab and other neighborhoods like it have not gone unnoticed; high-rise buildings are popping up all over the area to address the demand by mostly Palestinian couples affected by the residency restrictions.

Israeli officials admit that they are unable — and unwilling — to provide services to Kufr Aqab because of the high cost of having security forces accompany service contractors. The one issue that has been solved, however, is the garbage collection, after it was outsourced to a local Palestinian company. This problem had been festering for years, but the latest round of Palestinian-Israeli violence has focused attention to these rundown areas.

Israeli officials have reacted to the issue by looking for every possible unilateral solution, entirely refusing to deal with the core problem — the occupation.

Daniel Seidemann, an Israeli attorney specializing in Israeli-Palestinian relations in Jerusalem, told Al-Monitor that Israeli officials on the left and the right have come up with solutions that can't be implemented and that aim at dealing with this occupation-related issue.

“[Benjamin] Netanyahu’s government and [Nir] Barkat’s municipality are taking punitive measures, increasingly characterized by collective punishment and geared to 'pacify' the Palestinians. The so-called moderates propose to contain them — literally and figuratively — with even more walls and checkpoints. And the purported progressives seek to placate the Palestinians by building schools and sewage pipes, expecting that everything will be OK. None of this speaks the unvarnished truth that the occupation is metastasizing and can no longer be sustained by any of the measures above,” he told Al-Monitor.

Former Israeli Minister and Knesset member Haim Ramon addressed the issue in November 2015, calling on the government to turn over many of these neighborhoods to the PA. Shortly after 1967, Israel expanded the city limits of Jerusalem adding many villages and townships. Now that it's clear Israel is unable and unwilling to govern and administer services in this area, giving responsibility of these areas to the Palestinian government is called for.

Head of the Israeli opposition Isaac Herzog wants to further divide Jerusalem by building walls and checkpoints. The Washington Post reported March 7 that Herzog “imagines building miles of new concrete barriers and smart fences to separate 28 Palestinian neighborhoods in East Jerusalem from Jewish neighborhoods and Jewish settlements in the city.”

Jerusalem Major Barkat has also made clear his opinion of the situation. In a leaked audio broadcast on Israel’s Channel 10, on May 26, he called for revoking residency to hundreds of thousands of Palestinians.

Seidemann told Al-Monitor that Barkat’s three options are planned in such a way to accomplish the third one. “His first option is to take down the wall and replace it with checkpoints to show the world that the city is Israel’s undivided capital even though he knows this idea will be rejected by the security services,” Seidemann said. He said that Barkat's second idea of rerouting the barrier along the municipal lines is not attainable.

He continued, “This leads to the third option that is to revoke residency and relinquish the area." Seidemann is certain that all these ideas are next to impossible to implement because they totally ignore the reality on the ground and reflect policies increasingly tinged with racism and systemic human rights violations. “Attempts to break the will of the Palestinians and make their life miserable while trying to unilaterally determine the fate of 200,000 Palestinians reflect official policies in which Palestinian lives just don’t matter.”

Seidemann suggested that all these proposals represent a dangerous delusion to the Israeli public. He said, “The most devastating aspect of these plans is that they continue to peddle fantasies to the Israeli public — ones that serve Netanyahu and the ideological right and undermine Israel’s future. Jewish Jerusalem is bolstered and the Palestinians simply disappear or become domesticated.”

When a sewage pipe broke recently, local Palestinians contacted the Joint List of predominately Arab parties. Subsequently, Knesset members Ahmad Tibi and Osama Saadi visited on May 19 Kufr Aqab and the nearby Samir Amis neighborhood and promised to bring immediate help. They contacted the relevant Israeli agencies and within 24 hours the issue was solved, according to a report by the Knesset members.

Palestinians living in these neighborhoods, like Tamara and Ala’a, are not following this political discussion but instead are looking for ways to solve the problems impacting their daily lives. In the absence of a real peace process and agreed-upon solutions that aim at ending the Israeli occupation, areas like Jerusalem’s Kufr Aqab neighborhood will continue to be the source of headaches to the Palestinian Jerusalemites living in it, while the Israeli government is still not sure whether it wants to rule them or not.