Israeli Prime Minister Yair Lapids says he would not rule out a meeting with Palestnian President Mahmoud Abbas. 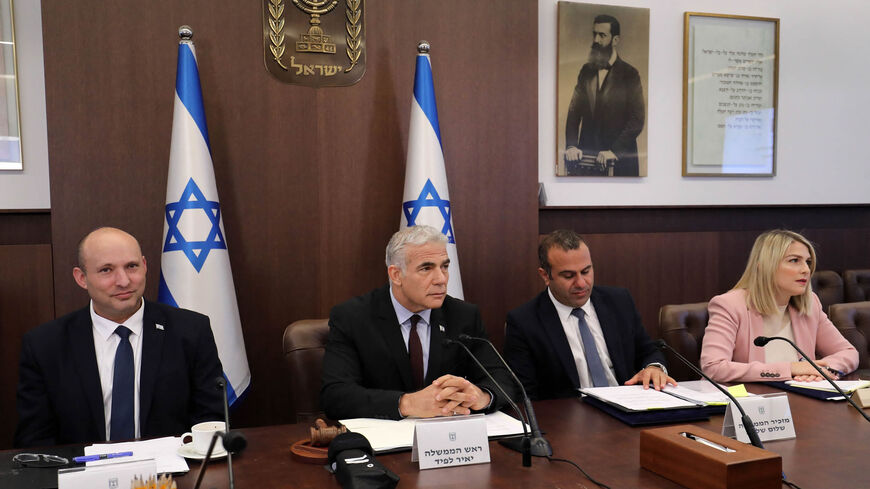 Israeli Prime Minister Yair Lapid spoke June 8 over the phone with Palestinian President Mahmoud Abbas. It was the first direct call between an Israeli prime minister and the Palestinian leader since 2017, when then-Prime Minister Benjamin Netanyahu spoke with Abbas. The 2017 conversation came after an attack near the Temple Mount in Jerusalem, where Arab assailants shot and killed two Israeli police officers.

The July 8 phone conversation was part of a round of calls Lapid was making to offer Muslim leaders best wishes ahead of the Eid al-Adha holiday on July 9. According to a statement by Lapid’s office, the two leaders discussed US President Joe Biden’s visit to Israel this week, and in particular “the continuation of cooperation and the need to ensure quiet and calm.”

On an official visit to Paris July 5, Lapid told reporters that while he would not rule out the possibility of a meeting with Abbas, there were currently no immediate plans for talks to take place. “I do not have meetings for the sake of meetings unless they have a positive result for Israel. At the moment it is not on the agenda, but I do not rule it out,” said Lapid.

Lapid made that statement after holding a joint press conference at the Elysee Palace with French President Emmanuel Macron, where the latter called on the Israeli and Palestinian leadership to resume the two-state solution talks. Reports later on said that among other issues, Macron also raised the matter of settlement construction. Lapid told reporters that he said to his French counterpart that while existing settlements would be allowed to expand, there would be no new settlements.

On June 7, a day before Lapid’s phone call, Defense Minister Benny Gantz met with Abbas in Ramallah, to discuss security coordination ahead of Biden’s July 13 visit. The two leaders last met in December 2021, when Gantz hosted Abbas at his home in Rosh Ha’ayin. They also spoke on the phone in April.

Israel’s security establishment has reportedly expressed concerns about the possibility of an escalation in the West Bank during Biden’s trip. A statement issued by Gantz’s office after the meeting in Ramallah said that the encounter “was conducted on positive terms.” The statement also said the two leaders discussed civilian cooperation and “the complexities of the upcoming period in Israel. The two agreed to continue security coordination and to avoid unilateral measures.”

According to the Palestinian Wafa news agency, Abbas "stressed the importance of creating a political horizon, respecting signed agreements and stopping the procedures and practices that lead to the deterioration of the situation." Abbas reportedly also stressed the need to "prepare the atmosphere" before Biden's visit.

A July 8 report by Israel’s public broadcaster Kan quoted an unnamed senior Palestinian source who claimed no real advancement was registered during Gantz’s visit to Ramallah. According to the source, the meeting was friendly, but Abbas told Gantz that in the absence of a diplomatic horizon, all steps taken by Israel in the economic and civil spheres are purely cosmetic and will not be useful. Reportedly, Abbas brought up demands already submitted by the Palestinians on numerous occasions, including the demand that Israel releases some Palestinian prisoners and returns bodies of Palestinian assailants it is holding.

The report also said Israel is expected to announce this week several goodwill gestures, including regularization of illegal Palestinian construction, advancement on the fourth-generation technology (4G) networks in the West Bank and perhaps also convening the Joint Economic Committee.

Completing these efforts by Israel to guarantee security calm ahead of Biden’s upcoming visit was President Isaac Herzog, who also called Abbas July 8. Reports on the conversation said only that the two leaders discussed Biden's visit to Israel and the West Bank, and that Herzog wished Abbas a happy Eid al-Adha.

The Biden administration had apparently asked Jerusalem not to engage in any provocative moves vis-a-vis the Palestinians just before and after the presidential visit. According to the pro-settlement Regavim movement, the government has been complying with that request. A scheduled July 18 discussion by the civil administration's Higher Planning Council toward the approval of the construction of nearly 3,500 homes in the controversial West Bank E1 area (near Jerusalem) was taken off the agenda, to be discussed at the September session instead.

Right-wing legislators warned July 10 against the reported intention of Israel to regularize illegal Palestinian constructions, arguing the move would lead to the establishment of a Palestinian state without the need for negotiations. Opposition members Orit Struck and Yoav Kisch sent letters to Cabinet ministers affiliated with the right, calling on them to act against the "serious step that would violate the status quo."

Also on July 10, Lapid addressed tensions with the Gaza Strip and reports over the past few days that Hamas is interested in a prisoner exchange deal. Addressing a memorial ceremony commemorating Israel Defense Forces soldiers killed during Operation Protective Edge in 2014, Lapid said, "In order to prevent the next Protective Edge, Israel must adhere to two principles: The first principle is zero tolerance of terrorism, zero acceptance of shootings or harm to Israelis. … The second principle is making the Gaza population realize that it is possible to live differently. [For that to happen], they must pressure Hamas to stop firing at Israel. With this goal in mind, we have expanded the number of work permits for Gazans, and we continue to promote the 'economy for security' outline."