Participating in the Ad Hoc Liaison Committee meeting in Oslo, Minister for Regional Cooperation Issawi Frej expressed the support of the Israeli government in increasing international financial assistance for the Palestinian Authority. 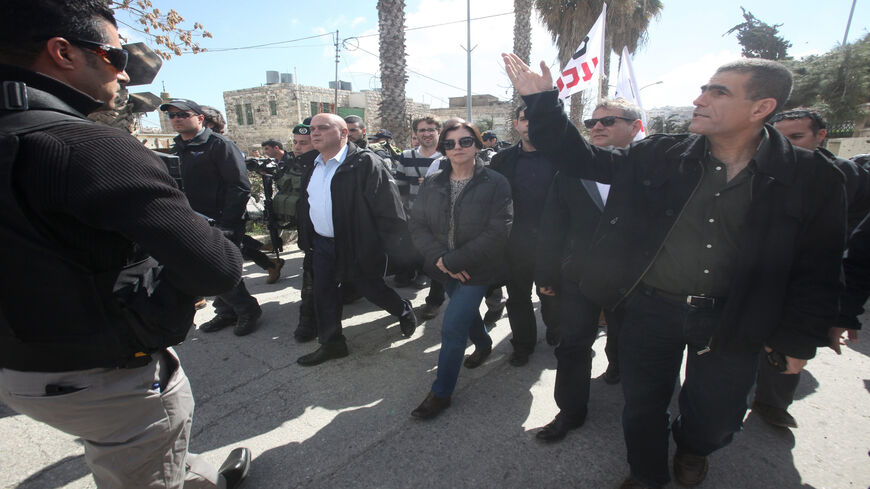 Israeli Meretz party members Nitzan Horowitz (2nd R), Zehava Galon (C) and Issawi Frej (C-L) take part in a visit of al-Shuhada street in support of Palestinians who were forced out of the old quarter at the outset of the second Palestinian intifada by the Israeli army to allow for Jewish settlers to move securely in the area, Hebron, West Bank, Feb. 25, 2014. - Hazem Bader/AFP via Getty Images

The biannual conference of nations that contribute to the Palestinian Authority (PA) convened in Oslo, Norway, Nov. 16-18. Representing Israel was Minister for Regional Cooperation Issawi Frej, who has made civilian and economic aid to the Palestinians a major focus of his mission. Frej met in Oslo with Palestinian Prime Minister Mohammad Shtayyeh and Palestinian Finance Minister Shukri Bishara.

These meetings represent another significant change in direction taken by the current government, especially as compared to the previous government. Frej brought a new Israeli attitude to the conference of donor nations by calling for an increase in donations and support to the PA. This is important particularly since the PA is having bigger cash flow problems than usual.

In a conversation with Al-Monitor, Frej said it should be obvious that all his talks and discussions have diplomatic significance as well. This even came up in his meetings with Shtayyeh, but it was not the main focus of their talks. “Our goal was to create the kind of atmosphere appropriate to the stage in which we can make progress and resume negotiations, even if that is not possible at the moment,” he noted.

Frej was referring to the guiding principles of the current coalition, of which his party Meretz is a member. As a left-wing party, Meretz supports a two-state solution. However, the government also includes hawkish right-wing parties like Prime Minister Naftali Bennett’s Yamina and the New Hope party of Gideon Saar, both of whom oppose the creation of a Palestinian state. The guiding principles of the current government determines that when it comes to dealing with fundamental issues of debate between the parties, such as the Palestinian issue, the status quo will be maintained. No steps will be taken in any direction with regard to it. Nevertheless, Bennett did agree to the position of Meretz, which is shared by his largest coalition partner Yesh Atid, that economic aid to the Palestinians should be increased.

In his speech to the conference, Frej explained, “While the conditions for a full diplomatic process may not be ripe yet, we should not, and cannot, sit still. We must seize the opportunity and lay the foundations in the present — for a better future.”

Problems began when the Palestinian prime minister delivered an antagonistic speech, blasting Israel of failing to uphold the Oslo Accord and blaming it for the PA’s dire economic situation.

The Ad Hoc Liaison Committee was established back in 1993. Chaired by Norway, other major donor nations include the United States, Canada and the European Union. Other members include Israel, Egypt, other Arab states, United Nations, International Monetary Fund and World Bank. It meets twice a year. The group’s original purpose was to provide stable economic footing for the PA after the Oslo Accord, as it transitions to full statehood. And yet, although tens of billions of dollars have been invested in this effort over close to three decades, it has yet to be achieved.

A Nov. 9 World Bank report found that although Palestinian commercial activity had recovered after a slowdown due to the coronavirus pandemic, discernible improvement is limited to the West Bank. The economy of the Gaza Strip has not recovered at all due to the armed clash with Israel in May 2021. Economic growth in the PA reached 5.4% in the first half of 2021, and is expected to reach 6% this year. Nevertheless, growth in 2022 is expected to slow down to just 3%.

According to the report, foreign aid has reached its nadir over the last few years, so that the PA is expected to have a $1.36 billion deficit in 2021, out of a $6 billion budget. Even now, the PA is unable to keep up with some of its payments, and has once again cut salaries of PA employees, as well as the transfer of cash to Gaza. One chapter of the report that was presented to the conference participants estimates that the cost of rebuilding Gaza after Operation Guardian of the Walls is $485 million.

Frej, who is in contact with the PA more than any other minister, presented the government’s position that Israel wants more aid to the PA so as to avoid an economic crisis there. This policy is based on the idea that positive financial conditions contribute to stability in terms of security. This idea has proved itself more than once in the last decade, when Hamas tried to create unrest in the West Bank, as it did last May.

Nevertheless, ever since 2015, diplomatic relations between the PA and the rest of the world have cooled somewhat. This can be attributed to the rise of former US President Donald Trump and overall disappointment with the Palestinian leadership. In practical terms, this is reflected in the severe decline in grants, contributions and loans that the PA received from the international community. It should be noted that this money makes up about one-third of the PA’s total annual budget. If, in 2008, the PA received $1.2 billion in grants from overseas, this dropped to less than half a billion dollars in 2020 and just $184 million this year.

At the conference, the Palestinian leadership asked that financial aid be restored to $1 billion at the very least, not including emergency aid for the Gaza Strip. Israel supports this, and the Biden administration is heading in that direction. The Europeans are willing in principle, but both the EU and the Biden administration have a number of preconditions. The most important of these is that the money is not transferred directly to the PA’s budget. They want it to target specific projects, and be under the direct supervision of the donors or UN organizations. The reason for this is fear of corruption. In a position paper four years ago to the Norwegian government, it was claimed that some 40% of the money did not reach its destination due to corruption in the PA apparatus. Norway then used the report to justify a reduction of funding.

The United States, like Israel, has legislation limiting direct aid to the PA because of the money it transfers to the families of terrorists involved in attacks in which civilians were murdered. According to Frej, all relevant parties are now looking for a formula to resolve this issue, including American emissary Hady Amr.