Can Europe save the Palestinian Authority?

Threats by President Donald Trump to cut assistance to the Palestinians could lead to opening the door to the European Union in the diplomatic as well as economic realm of the Israeli-Palestinian conflict. 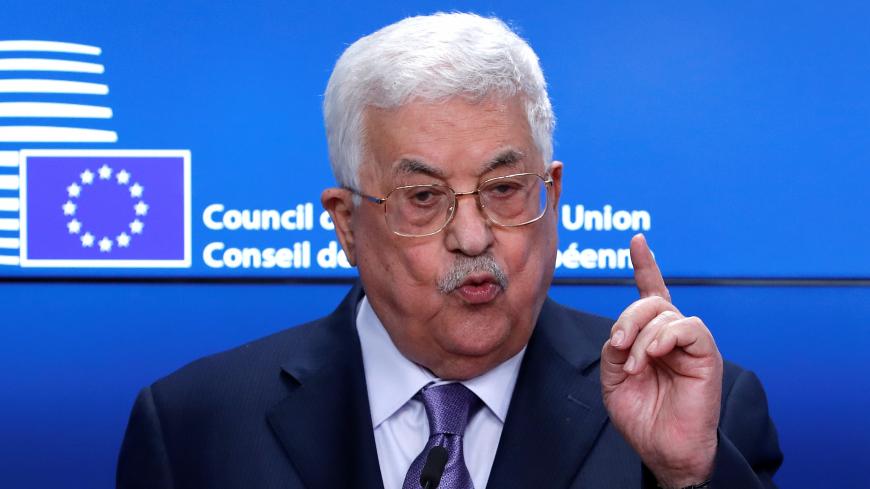 At the request of Norway, the European Union on Jan. 31 held an emergency session in Brussels of the Ad Hoc Liaison Committee (AHLC), which coordinates development assistance to the Palestinian people. The donors’ group had last met in September, on the sidelines of the UN General Assembly meeting in New York, to discuss concerns about the possible collapse of the Palestinian Authority (PA). Then, as now, Israel was represented by Regional Cooperation Minister Tzachi Hanegbi and Maj. Gen. Yoav Mordechai, the head of Coordination of Government Activity in the Territories.

The Brussels meeting is one of the most important in the history of the AHLC, formed in 1993 following the signing of the Israeli-Palestinian Oslo Accords and the ensuing establishment of the PA. The committee is critical to the PA’s operations and for the rule of Palestinian President Mahmoud Abbas. The meeting took place the day after US President Donald Trump’s State of the Union Address, in which he reiterated his warning that US foreign aid would only be used to serve American interests and “only go to America’s friends.” The message to Abbas was loud and clear.

Norwegian Foreign Minister Ine Eriksen Soreide and EU foreign policy chief Federica Mogherini called the emergency AHLC meeting in Brussels in the wake of Trump’s alarming threats to cut off US aid to the PA. As I wrote Jan 29 in Al-Monitor, a significant scaling back or cancellation of US aid to the Palestinians could have dire consequences for the PA's functioning, including its security forces, endangering security coordination with Israel that has helped thwart anti-Israeli terror attacks.

The EU member states, as well as the biggest single donor to the Palestinians, the United States, do not funnel unallocated funds directly into the PA's coffers. Instead, they pay for specific projects to prevent the money from ending up in the personal bank accounts of well-connected Palestinians. For example, the nearly $330 million approved by Congress in 2017 was transferred directly to the Israel Electric Company to cover debts accrued by the PA and to buy equipment and maintenance services for hospitals in East Jerusalem.

In view of Trump’s threats, the fate of US economic aid to the PA for fiscal year 2018 is unclear. Will Trump carry out his threat and order a total freeze on funding, or will he slash the amount, as he did by halving the most recent aid installment to the United Nations Relief and Works Agency for Palestinian refugees from $125 million to $60 million?

This is the backdrop of the extraordinary meeting in Brussels. It does not, however, mean that the European foreign ministers will pull out their checkbooks and cover the deficit of hundreds of millions of dollars created by the Americans. Over the past four years, European aid to the Palestinians has declined gradually, but this was not in an effort to punish them. Senior PA officials attribute the $300 million cut from their $1.1 billion in donor aid to the economic crisis in Greece and the consequent EU bailout scheme, as well as the shockwaves from Brexit.

Mordechai has made no secret of his grave concern over the PA’s economy and the humanitarian crisis afflicting the 2 million Palestinians in the Gaza Strip. He managed to convince the Israeli defense establishment to pressure the politicians into approving a series of measures helpful to the PA, but it is clearly a drop in the bucket. Unless Europe can fill the budget shortfall created by the United States, no easing of Israeli restrictions will save the PA from collapse.

At a preliminary meeting in Brussels on Jan. 30, Mordechai criticized EU leaders’ failure, in his view, to obtain the release of two Israeli citizens and the remains of two Israeli soldiers being held by Hamas in Gaza. He then went on to express his concern about the current situation, describing the dire economic circumstances in the Palestinian territories, especially in Gaza, and accusing Hamas of stealing aid being sent into Gaza by Israel and other states.

Since the signing of the Oslo Accords almost 25 years ago, Israel has rejected all European attempts to engage in the Israeli-Palestinian peace process. For instance, Israel boycotted the June 2016 Paris Conference for Peace in the Middle East, convened by President Francois Hollande. Prime Minister Benjamin Netanyahu, who views many European states as biased in favor of the Palestinians, last year described the EU leadership's conduct toward Israel as “crazy.”

Now, however — as it appears the United States will no longer be the principle diplomatic mediator between Israel and the Palestinians or even a key economic donor — the door is wide open for the EU to take the regional stage. This does not mean that Netanyahu will agree to accept the EU as an alternative mediator to Washington, as Abbas would like, but the greater Europe's economic involvement is, the more it will seek to expand its influence to the diplomatic arena as well.

Israel’s Foreign Ministry used to boast that despite the EU's sweeping support for the Palestinians, Israel had managed to thwart European recognition of Palestine as a state. As the donors met in Brussels, the Slovenian parliament convened to vote on a resolution recognizing a Palestinian state. The vote reflects the sense of hopelessness felt about resolving the Israeli-Palestinian conflict through negotiations. Slovenia is not a central player in the EU, but other states could well reach the same conclusion that it has.