Outgoing Minister for Environmental Protection Tamar Zandberg calls on the new Israeli government not to give in to small politics, but continue engagement to battling climate change, reducing greenhouse gas emissions and reducing plastic pollution. 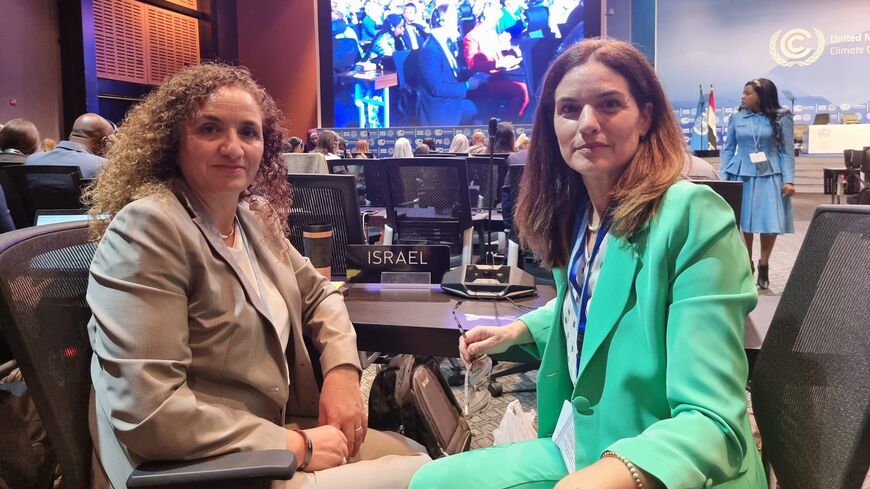 Both Lebanon and Iraq consider Israel an enemy state and prohibit their citizens from having contact with Israeli nationals. The maritime border deal reached recently between Israel and Lebanon was negotiated via an American mediator and signed in the form of letters handled by the American administration and not as a bilateral agreement. Hosted by Egypt and by Cyprus, the Nov. 8 meeting was also attended by representatives from Jordan, Saudi Arabia, Oman, Bahrain, Qatar, the United Arab Emirates, Kuwait and the Palestinian Authority.

Yesterday’s meeting was part of a Cypriot initative to gather regional climate data. The initiative aims to facilitate the drafting of regional climate policies. In this framework, multinational task forces of 220 scientists including 12 Israeli researchers have recently mapped the effects of climate change in the Mediterranean and Middle East regions. The scientists identified where action was needed and presented their findings at COP27.

Speaking with Al-Monitor, Zandberg said that countries of the region share concerns over climate challenges, but none can confront them alone. Just as they share the problems, the countries of the region can and should share the solutions. “I sat with the Lebanese and Iraqi representatives in the framework of a large round table on the Cypriot initiative. There were no personal meetings between us. Still, it was a significant and important encounter. The climate crisis is a threat shared by all of us. It goes beyond rivalries, borders or political differences.”

Zandberg added that regional cooperation on climate has been her priority throughout her term as minister.

She said, “We have been working with the Jordanians on cleaning up and rehabilitating the Jordan River. We are much involved in the Cypriot regional initiative. Yesterday Regional Cooperation Minister Esawi Frej signed the solar energy/water desalination memorandum of understanding with the Jordan and the Emirates. We are also working with the Egyptians. This COP at Sharm al-Sheikh is the first time Israel has set up a national pavilion in a climate summit, and it is attracting much attention. We have visitors from neighboring countries, from the Gulf and elsewhere. Members of the Israeli delegations are meeting with regional counterparts. It’s a very productive conference for us, especially since it takes place just next door to Israel, in Egypt.”

A member of the leftist Meretz party, which failed to pass the Knesset entry threshold in last week's elections, Zandberg will not serve as legislator or minister at the 25th Israeli parliament. Still, unlike Prime Minister Yair Lapid, Energy Minister Karine Elharar and Transportation Minister Merav Michaeli, who canceled their trips after the vote, Zandberg decided to attend COP27 as planned. Her associates explained that Zandberg attached much importance to being part of the Israeli delegation, the largest ever sent by the country to a COP summit.

Zandberg told Al-Monitor that Israel is in a much better place today on battling climate change compared to its situation a year and a half ago, under the previous government of Prime Minister Benjamin Netanyahu.

“Israel arrives to COP27 much more prepared than for COP26. Over the last year, we have adopted a series of decisions and allocated much funding for fighting climate change. It has definitively been a priority for the government.

“The government approved a final target of zero net emissions by the year 2050, and a medium-term target of reducing greenhouse gas emissions by 27% by 2030. This medium-term goal is relatively low compared with other countries, committed to reducing emissions by 40% or 50%, but we started late in in the game and had much catching up to do. We are a small and crowded country, so it’s not easy. Still, I believe that with more legislation, more funding and more measures we could pass this goal and be even more ambitious than 27%. I really hope that the next Israeli government will follow that line.”

Zandberg said that Israelis are more aware now of the dangers presented by climate change and increasingly willing to work to mitigate and make the necessary compromises. Last November, on Zandberg’s initiative, the government introduced a new tax on disposable plastic ware, doubling its price for Israeli consumers. At the time, Zandberd said, “Israel is addicted to disposable plastic and it is time to quit.” Last January, Israel hiked a tax on sweetened drinks (nicknamed “the sugar tax”), in bid to encourage healthy lifestyles.

Both taxes were slammed by ultra-Orthodox politicians, since the generally large ultra-Orthodox families are often great consumers of plastic ware and sweetened beverages.

During the election campaign, ultra-Orthodox Shas party leader Aryeh Deri pledged to cancel the sugar tax. Reports after the Nov. 1 elections said the stock prices of Israeli beverage companies have gone up in expectation for the tax to be canceled under the new coalition. The stocks of companies producing plastic ware have also slightly increased as the market anticipates a cancelation of that tax.

Zandberg warned, “Canceling or reducing taxes on plastic ware and sweetened beverages would be a grave mistake, one which we will regret for generations to come. Plastic bottles and cutlery make for 90% of our plastic pollution in Israel. An electoral pledge to increase plastic pollution is madness. This is small politics. The public will pay dearly for that in terms of climate change and health.”