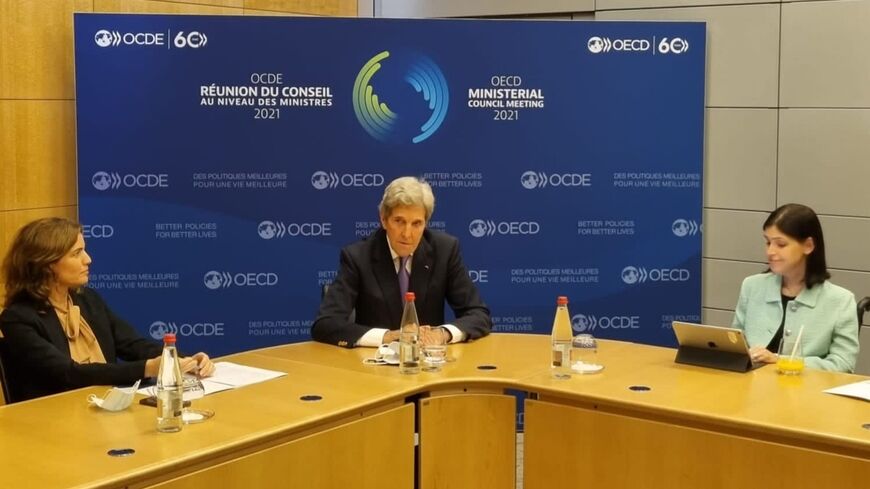 PARIS — Environmental Protection Minister Tamar Zandberg, Energy Minister Karin Elharar and Israel’s ambassador to the Organisation for Economic Co-operation and Development Haim Assaraf met today with US climate envoy John Kerry. The Israeli delegation told Kerry that Israel will be joining the American and European-led initiative for a global 30% reduction in methane gas emissions by 2030. The initiative, to be presented at the COP26 summit in Glasgow at the beginning of November, will join world efforts to reduce emissions of CO2.

Zandberg said at the meeting with Kerry that the window of opportunity for battling climate change is closing by the minute, which is why Israel decided to join this important initiative. Her ministry has already prepared a strategic plan for trash management in order to significantly reduce methane emissions in Israel.

The Israeli delegation participated yesterday and today in the OECD annual ministerial council, dedicated this year to building a green and inclusive future. It was the first time that Israel has sent two female ministers to the high-level meeting.

On July 23, Prime Minister Naftali Bennett, together with the ministers of environmental protection, energy, finance, foreign affairs, transportation, economy and interior, announced that the government was setting an ambitious national goal of reducing carbon emissions by at least 85% from Israel’s 2015 levels. Elharar explained to Al-Monitor that on top of reducing CO2 emissions, the government adopted measures for promoting climate change solutions, including encouraging the use of electric vehicles, prioritizing green, energy-efficient construction and taxing carbon as of 2023. Taking into account that the latter is likely to increase the price of household electricity, the government will put in place a subsidy system to assist poor families with the expected higher rates.

Elharar told Al-Monitor that the agenda set up by the OECD for its ministerial summit this year correlates with the agenda of the Israeli government. “The cabinet prioritizes advancing solutions for the climate crisis. As the energy minister, I am responsible for climate change mitigation, for energy-related innovation and technologies, for renewable resources and for the green hydrogen issue. We came here to Paris to present our vision of things, what we can contribute on battling climate change, and also to learn from the experiences of our peers. That’s the essence of being a member in an international group. For example, the meeting offered me an opportunity to consult with my Norwegian colleagues on the issue of further drilling for natural gas at sea.”

Like Elharar, Zandberg believes that Israel has a lot to offer the world on high-tech solutions for the climate crisis. She told Al-Monitor, “Israel could contribute to the global battle against climate change in several unique ways. We can offer innovation and technology. We are a country of entrepreneurship, the start-up nation. We already lead internationally in several domains, such as food tech, smart water management and agricultural technologies, which are all essential for resilience and for adaptation, in order to prepare for the ramifications of the climate crisis. But we are also advancing in new domains, such as the stocking up of renewable energies and other fields where Israeli ‘start-upism’ can play an important role. Our prime minister — who comes himself from the world of high tech and start-ups — is really putting much emphasis on that.”

For Zandberg, the summer of 2021 — with its major climate-generated natural disasters and the publication of the Intergovernmental Panel on Climate Change report that climate change is widespread, rapid and intensifying — had a real impact on Israelis. “We see our youth participating at the Friday demonstrations, much like young people in many other countries. The Israeli public is in no way indifferent to this battle,” she noted.

Judging by the speeches and statements made today and yesterday in Paris, the OECD meeting seems to serve as a rehearsal for the upcoming COP26 Glasgow summit. According to Zandberg, with all the measures taken by the new government, Israel will come well prepared. “We are very proud of moves taken by this government in favor of a low-carbon economy, including the carbon tax legislation. The prime minister will head the Israeli delegation to Glasgow. With the new government, protection of the environment and fighting climate change are taking much higher places on Israel’s national priority list.”

To encourage innovation, the Bennett government is removing administrative obstacles for small companies. Elharar said, “Last week, I presented to the prime minister seven leading Israeli companies that are developing impressive ideas and solutions that could really change the picture on green energy. Together we decided on simplifying regulations so that these companies could advance quickly and with great results. We will work together to increase their visibility to the world.”

The two ministers' presence together at the OECD council presented another innovative facet of the Bennett unity government, said Elharar: “The current Israeli government is one of change and equality. It includes a record number of female ministers. We have many women representing Israel in international forums, and our participation here certainly reflects values shared with the OECD of gender equality.”

Zandberg agrees. She also noted that in the past, the Environmental Protection Ministry and the Energy Ministry did not work well together, if at all. That has dramatically changed in the current government. “The cooperation between us is part of the overall policy of this government, which is focused on working professionally and efficiently. It is a very politically diverse cabinet, but the prevailing working atmosphere is one of cooperation and serving the public. In fact, we all feel very enthusiastic and positive working for the benefit of Israeli citizens."