Israeli President Isaac Herzog has established the Israeli Climate Forum ahead of the COP 26 summit in Glasgow. 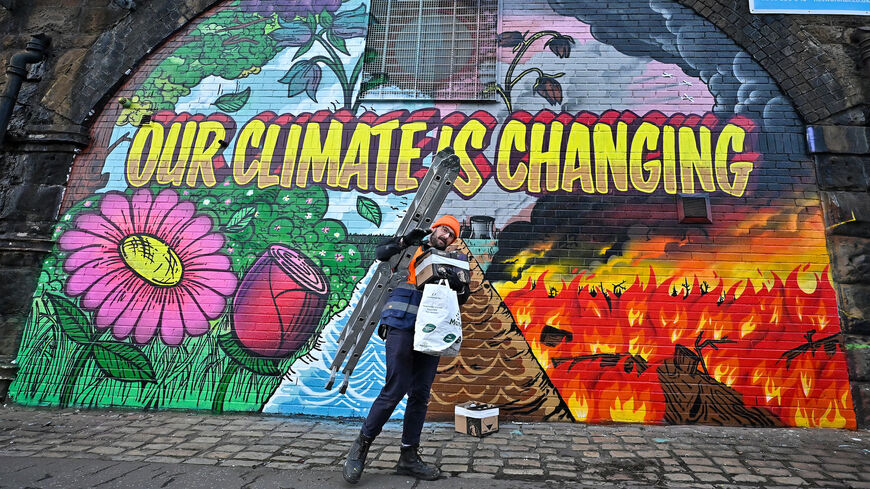 Artists paint a mural on a a wall next to the Clydeside Expressway near Scottish Events Centre, which will host the COP26 UN Climate Summit later this month, on Oct. 13, 2021, in Glasgow, Scotland. - Jeff J Mitchell/Getty Images

Israeli President Isaac Herzog announced the establishment of the Israeli Climate Forum on Oct. 19. The new forum, which will operate under Herzog’s office, will shape Israel's role in fighting the global climate crisis and include representatives from the government, Israeli academia, local authorities, civil society and the business sector.

The forum is expected to convene every three months, bringing together top government officials, senior researchers, civil society activists and leaders within Israel’s business and industrial sectors to advance national action and plans to fight the climate crisis. Subcommittees will then advance ideas and solutions in the relevant government ministries.

“The global climate crisis has become an international emergency. It is having an impact on our lives in every respect, from the economy to national security. The establishment of the Israeli Climate Forum underscores the importance of dialogue between all parts of Israeli society. I hope that we will be able to place our concern for the future of our children and the fate of Planet Earth above arguments between us,” read the president’s announcement. It also called on Israel and Israelis to “wake up, change habits and stop the climate crisis from getting worse.”

The president then tweeted that the climate crisis was “also creating opportunities that we mustn't miss. Israel’s advantage is its ability to contribute to solving this problem through social and technological innovation and revolutionary changes to global ways of thinking.”

Herzog picked former Knesset member Dov Khenin, one of the first Israeli legislators to take up the cause of climate change, to head the new forum. He tweeted, “I agreed to undertake heading the Israeli Climate Forum set up by President Isaac Herzog, to bring together senior decision-makers in the government and the Knesset [on] dealing with the crisis, so they will become familiar with the challenges and with the solutions. It is a race against time, a real state of emergency that requires broad mobilization and a real change of direction.” During his many years in the Knesset, Khenin initiated numerous environmental protection bills and headed Life and Environment, an umbrella organization of Israeli environmental groups.

Herzog is wasting no time. The COP 26 climate summit is due to open in Glasgow Nov. 1 and run until Nov. 12. The president will host a meeting next week with the Israeli delegation set to attend the summit.

Prime Minister Naftali Bennett confirmed Oct. 15 that he will lead Israel’s delegation to the Glasgow summit. He is expected to fly to Scotland on Oct. 31. Bennett was personally invited to the summit last July by British Prime Minister Boris Johnson when the two spoke on the phone. US President Joe Biden is also expected to participate.

Bennett is set to arrive to Glasgow with an impressive delegation to include Environmental Protection Minister Tamar Zandberg and Energy Minister Karin Elharar. The two ministers participated together in the Oct. 6 Paris OECD annual ministerial meeting, which was dedicated to green energy and protecting the environment and lay groundwork for the COP 26 summit. Meeting with US climate envoy John Kerry in Paris, Zandberg and Elharar told him Israel will join the American and European-led initiative for a global 30% reduction in methane gas emissions by 2030. The initiative, to be presented at the COP26 summit, will join world efforts to reduce emissions of CO2.

At the Paris meeting, Zandberg told Al-Monitor that despite its small size and its own inability to reach the global goal of zero net emissions by 2050, Israel has the potential to become a key player in battling climate change. The green technologies developed by Israeli researchers and companies make Israel a world leader in areas such as solar energy, energy storage, smart agriculture and protein alternatives.

Elharar told Al-Monitor that her ministry had identified the leading Israeli companies on green energies and that she had presented them to Bennett in preparation for the COP 26 summit.

Zandberg is reportedly pushing for the government to declare national climate emergency. If it does, government bodies would be obligated to work more closely together on preparations for the impact of climate change.

Another initiative that had been pushed for many years by Israeli environmental organizations, chief among them Adam Teva V’Din, is a climate law that would give Israel a comprehensive framework for the reduction of greenhouse gas emissions and transition to a low-carbon economy as well as provide the government with legal tools to prepare for the consequences of climate change. Working with green organizations, Zandberg has been championing such a law since she took office and apparently, now most of the government ministries are ready to back such legislation. Only the Finance Ministry is not in favor of the law, while the Energy Ministry has some reservations about it.

On the civil society side, during the first part of 2021, the Coalition of Climate Change Groups in Israel organized 14 events across the country. These local and regional climate conferences were intended to recruit and empower the public and local authorities to take meaningful action on various issues and challenges related to the climate crisis. At a culminating final event on Oct. 11, the coalition presented a joint report compiled by the participating parties. The document addresses the place of the public in battling climate change in Israel, with observations and proposals. It will surely be useful to the Israeli delegation in Glasgow.