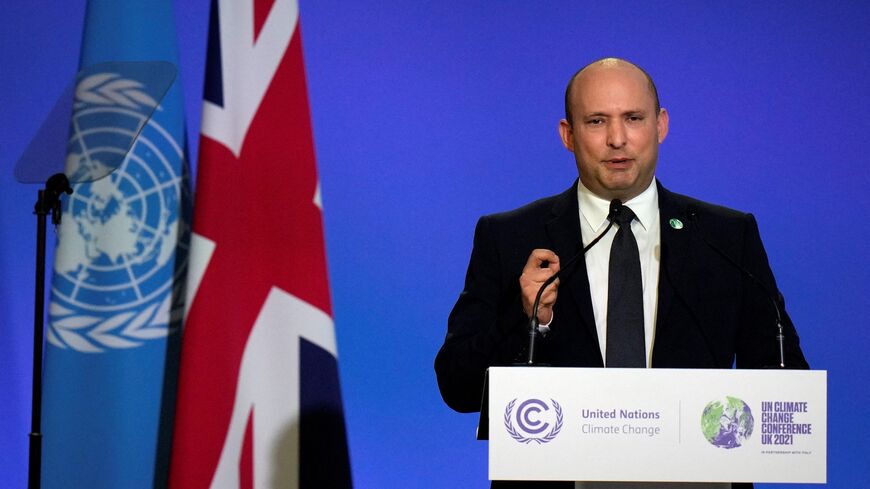 Addressing the COP26 summit in Glasgow today, Prime Minister Naftali Bennett  detailed a series of dramatic steps his government will take to battle climate change. “Israel is at the beginning of a revolution on climate change. We recently started implementing our 100-step plan, which means that we’re currently doing more to promote clean energy and reduce greenhouse gases than at any other time in our country’s history. For the first time, Israel is committing to cutting greenhouse gas emissions to net zero by 2050, and will phase out the use of coal by 2025.”

Bennett addressed Israeli entrepreneurs, calling on them to focus their efforts on the climate battle. “We’re less than a third of the size of Scotland. Our carbon footprint may be small, but our impact on climate change can be mighty. If we’re going to move the needle, we need to contribute Israel’s most valuable source of energy — the energy and brainpower of our people. You see, this is what fuels our innovation and ingenuity. This is where Israel can make a real difference. … As the country with the most startups per capita in the world, we must channel our efforts into saving our world. … You can be the game-changers. You can help save our planet. You see, instead of building yet another hyped-up internet app, why don’t you launch startups that will help solve this global threat?”

The Israeli premier added he is setting up a task force called the “Green Sandbox,” which will provide funds to help out Israeli entrepreneurs and clear their path to advance climate solutions of red tape. Paraphrasing Israel’s nickname, the Startup Nation, Bennett said that “Israel can become the climate innovation nation, and we are ready to pave the way.”

On the sidelines of the summit, Bennett met today with other world leaders including French President Emmanuel Macron, Canadian Prime Minister Justin Trudeau and Australia’s Scott Morrison. Zandberg met today with Cypriot Agriculture Minister Costas Cadiz, who invited Israel to take part in an initiative his country is leading for Eastern Mediterranean Basin countries to cooperate on climate projects.

Ahead of Glasgow, Bennett and his cabinet ministers repeated declarations of Israel’s commitment to the global climate battle.

The next day, Elharar launched the Ministerial Forum for Renewable Energies to work toward the target of net zero greenhouse gas emissions by 2050.

Still, not all last week's news on the climate front was encouraging. The State Comptroller published a stinging report Oct. 26, criticizing the lack of action by successive Israeli governments to prepare the country for the looming climate crisis.

Declaring climate change a national security interest of Israel is no small matter. Bennett had resisted Zandberg's previous calls to declare that Israel suffers from a national climate crisis. The Finance Ministry and others had campaigned against such a move, which would mean state funding to cope with the crisis and its consequences. Still, Bennett's declaration that the climate crisis battle is a national security interest is certainly a significant move in that direction.

The Glasgow summit is being heavily covered in the Israeli media and some 12,000 people demonstrated Oct. 29 in Tel Aviv's Rabin Square, calling upon the government to adopt strong measures against climate change. Leading climate change group Adam Teva V’Din said the Friday the protest was Israel's biggest climate demonstration to date. The group continues to call upon the government to adopt comprehensive climate legislation, which it calls an indispensable tool for implementing the necessary and urgent measures.