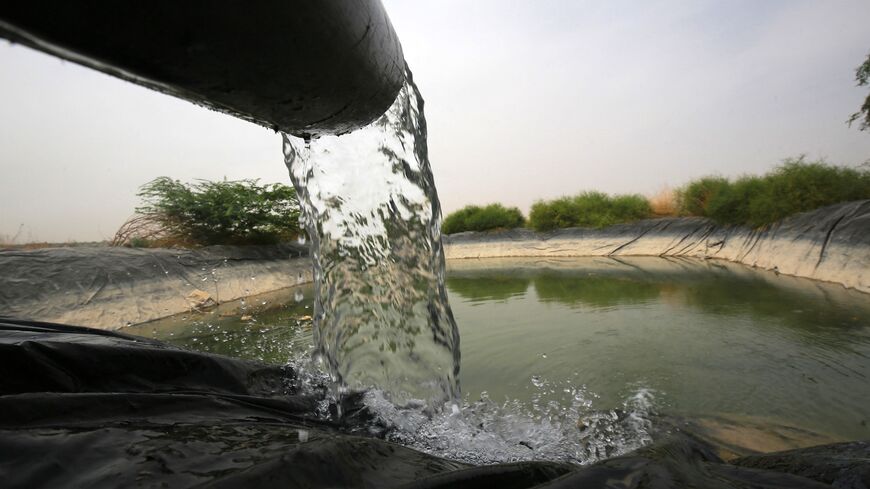 Water pours into an agricultural irrigation pool in Ghor al-Haditha, around 80 kilometers (50 miles) south of the Jordanian capital, Amman, on April 20, 2021. Experts say Jordan is now in the grip of one of the most severe droughts in its history; the country's environment ministry says it is among the world's most four water-deficient countries. - KHALIL MAZRAAWI/AFP via Getty Images

According to a former unnamed senior Israeli official, cited by Walla news, the meeting was very positive. Reportedly, Bennett informed the king at the beginning of the meeting that Israel would agree to sell the kingdom more water than the quota provided by the 1994 bilateral peace agreement. Jordan needs the deal to confront a devastating water shortage.

Last week, the Israeli press reported that Bennett had given his initial approval for the sale of an additional 50 million cubic meters of water to Jordan, but reports did not mention any direct contacts between the leaderships of both countries. If the deal is realized, it would be the largest sale of water from Israel to Jordan since the peace treaty, which provides for an automatic allocation of 55 million cubic meters of water on an annual basis at 3 US cents per cubic meter.

The reports last week linked the Jordanian request for more water with Abdullah's upcoming meeting with President Joe Biden, saying that the American administration was encouraging Jerusalem to respond positively. The reports also said Jordan had asked for an annual allocation of 50 million cubic meters for five years, but Bennett gave initial approval only for this year and the next year. Requests for years after would be reviewed according to the water levels of the Sea of Galilee.

Foreign Minister Yair Lapid met in Jordan on July 8 at the Jordanian side of the Allenby Bridge with his Jordanian counterpart Ayman Safadi to seal the water deal. It was the first public meeting between the two since the establishment of the Bennett government. At the meeting, Israel agreed to increase the amount of water it supplies to Jordan by additional 50 million cubic meters.

Lapid and Safadi also agreed to raise a cap on Jordanian exports to the West Bank from $160 million to $700 million. In a statement issued after the meeting, Lapid tweeted, ‘’I met today in Jordan with my Jordanian colleague, Deputy Prime Minister and Foreign Minister Ayman Safadi, and at the meeting we agreed on cooperation on trade and water issues. In addition, we, both two ministers, agreed to promote cooperation in a variety of other areas.’’

Lapid said Jordan is a neighbor and important partner of Israel, and that the Foreign Ministry will continue to hold an ongoing dialogue with Jordan in order to preserve and strengthen bilateral relations.

These meetings come after years of disconnect between Israel’s prime minister and the Jordanian king. As tensions between the two countries increased, Abdullah refused to take calls from then-Prime Minister Benjamin Netanyahu. Gabi Ashkenazi, when he was foreign minister, and Defense Minister Benny Gantz both made efforts during the last Netanyahu government to repair the diplomatic disconnect between the two countries, with Ashkenazi meeting Safadi at least twice.