Recent terror attacks in the West Bank have put Prime Minister Naftali Bennett in a complicated spot with his right-wing base. 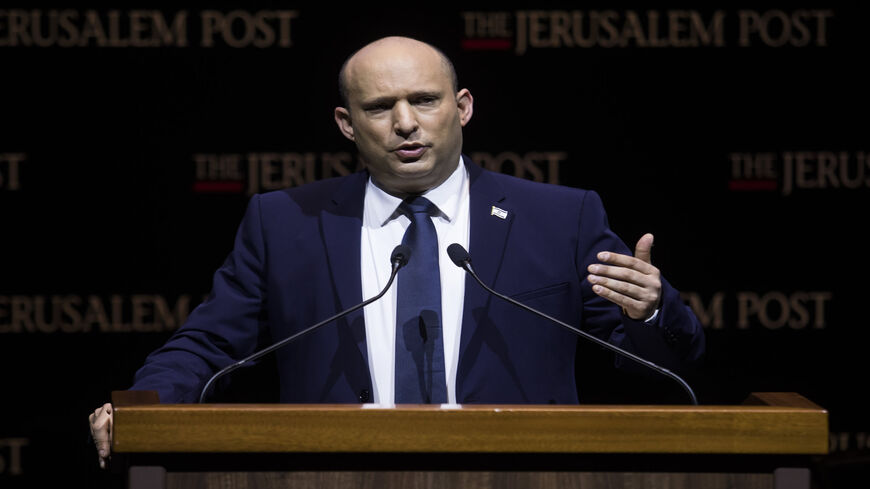 Sometime between late Saturday night and Sunday morning, on Dec. 18-19, Prime Minister Naftali Bennett received news of a breakthrough in efforts to catch the perpetrators of the deadly shooting three days earlier, on Dec. 16, near the West Bank outpost of Homesh. The attack left Yehuda Dimentan, 25, dead and two others injured.

The successful operation was over before dawn. The Shin Bet, supported by special forces from the Israel Defense Forces (IDF) and the police, captured seven terrorists, four of whom were behind the attack. No Israeli forces were hurt in the operation.

Bennett’s decision that night to keep track of the operation from the military command center surprised the top brass of the IDF and Shin Bet. Rarely do prime ministers show up at command centers to oversee “tactical” operations. Even Defense Minister Benny Gantz wasn’t there. He preferred instead to receive regular updates by phone throughout the night.

The media released news of the successful operation early on Dec. 19. This included official photos of the prime minister in the command center, being updated by senior officers, and an unusually firm statement by Bennett: “Let every terrorist know that the State of Israel will hold him to account. There’s no way to hide for long. I’d like the family of Yehuda Dimentan to know — the pain is enormous, but terrorism will not win. It will not push us out of our rightful place here.”

The fact that Bennett felt a need to release photos of his victory against terrorism and to take such an aggressive line seemed more like an act of desperation. For the last few weeks, his government has been dealing with a series of attacks by Palestinians. While some of these have been described as having been committed by frustrated youths, the Dec. 16 attack indicates that organized terrorism also poses a threat. The terrorist squad behind the shooting was armed and ready to ambush a group of yeshiva students driving by. Israel’s security forces referred to it as an escalation of violence. While they are reluctant to lump recent events together and describe them as “a wave of terrorism,” no one can ignore the increase in Palestinian attacks against Israelis.

This is exactly where Bennett’s soft spot lies. Until just a year ago, he tried to present himself as being more right wing than Benjamin Netanyahu himself, and even accused the former prime minister of being helpless and weak in dealing with Hamas and the Palestinian Authority. Having benefited politically from his attacks on Netanyahu from the right, Bennett must now prove that he can keep his promises. The problem is that this can be difficult, especially given the complex political situation in which he is trapped.

Bennett’s problem is his coalition, which includes two left-wing parties — Labor and Meretz — and the Arab Ra’am party headed by Knesset member Mansour Abbas. This left-wing-Arab bloc ardently supports a two-state solution and the immediate renewal of negotiations with the Palestinians.

When the attacks began over the last few weeks, these parties offered an approach that would “contain” the Palestinians rather than defeat them. The most prominent representative of this view was the Labor party’s Minister of Public Security Omer Bar Lev. Playing down the severity of the incidents, he frequently told interviewers that these attacks were conducted by frustrated young people. This resulted in sharp criticism from the right and even faced calls for his resignation. Bar Lev also found himself in conflict with his coalition partners because of a tweet in which he seemed to boast about speaking with US Undersecretary of State Victoria Nuland about settler violence. This led to another torrent of criticism from various right-wing ministers, including Ayelet Shaked, Matan Kahana and Yoaz Hendel, three figures who are especially popular among the settlers. Suddenly, they found themselves embarrassed by Bar Lev’s remarks and needed to explain themselves.

In the end, this criticism reached all the way to Bennett himself. Forced to express his own reservations about Bar Lev’s remarks, he tweeted, “The settlers in Judea and Samaria [the West Bank] have been suffering from daily violence and terrorism for decades. They are the defensive wall for all of us. We must strengthen and support them, in word and in deed.” Bennett added, “Every sector has some marginal phenomenon or other of its own. Every means at our disposal must be used to deal with them, but we must not make generalizations about an entire sector of the population.”

Anyone who follows the social media accounts of the current government’s right-wing ministers will see that they are constantly on the defensive, when dealing with their base. The longer these new terrorist attacks continue, the harder it will be for them to explain themselves to that base. Most frequently, they are accused of helping to form a government with the Arabs and the left. The question is how long the right-wing members of the coalition can contain this situation.

The situation is especially complicated when it comes to Ra’am. Right-wing parties are constantly demanding that Abbas condemn the attacks. They realize that Abbas is the current government’s Achilles’ heel. The longer these attacks persist, the more the right will exploit Abbas and Ra’am politically.

That’s exactly what happened Dec. 16, right after the deadly shooting. The Likud reacted immediately on Twitter: “The Likud demands that Abbas and Ra’am condemn the attack in Samaria on their Arabic-language Facebook and Twitter accounts, without any reservations and any excuses. After receiving 53 billion shekels from Bennett, it’s the least they can do.”

Ra’am has remained unmoved by this so far. If, however, the attacks continue, there is no doubt that the government, with all its diverse factions, will be caught at a crossroad.

When the current government was formed against all odds, the working assumption of its members was that they would be able to avoid the issues dividing them, chief among them, the Palestinian issue and Hamas. It seemed at first as if they found the right formula. They looked like they would be able to focus on civilian affairs and the coronavirus, while ignoring the elephant in the room. What they have since learned is that the reality of the Middle East — and of Israel in particular — is a lot stronger than all the goodwill of the current Israeli leadership.

As far as Bennett is concerned, these terrorist incidents pose an even bigger political, diplomatic and security threat than the Iranian nuclear threat. The coalition is in consensus about the need to stop Iran from developing nuclear weapons, and this extends to the opposition, too. It is a strategic issue of the first order. Local terrorism, on the other hand, may be a tactical issue, but it forces Bennett and his government to confront a problem, which can no longer be ignored. That is why it was important for Bennett to show up in the command center and be photographed with the top brass of the security forces. He wanted to win public support from the right. The problem is that the photos and even his aggressive statement are little more than sticking a Band-Aid on a gaping wound, while it is still gushing blood.