At the top of the agenda is achieving a sustainable ceasefire between Israel and Hamas, and whether progress can be made in Israeli-Palestinian talks. 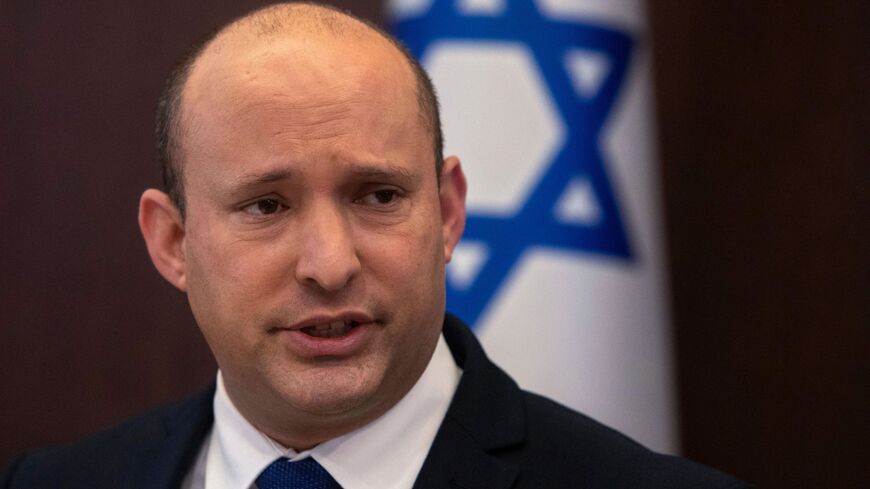 This was the first public visit by an Israeli prime minister to Egypt in over a decade. Former Israeli Prime Minister Benjamin Netanyahu had met the late Egyptian President Hosni Mubarak in 2011. Since then, Netanyahu had not visited Cairo officially again — but Sisi recently invited Bennett to visit Egypt.

Egyptian and Israeli officials and analysts believe Bennett’s visit is a reflection of more public rapprochement between the two countries, which might pave the way for reviving the Middle East peace process.

The Egyptian presidency published a video from the meeting in which the two leaders smiled and greeted each other. The Israeli flag was placed behind Bennett as he sat across from Sisi for a photo op.

Former Egyptian assistant foreign minister Rakha Hassan told Al-Monitor that the meeting was a “great service by the Egyptians” to Bennett as it strengthened his political power in Israel. He referred to Netanyahu's request to visit Egypt, which was never answered.

The two leaders discussed ways to boost bilateral relations in various fields, as well as the latest regional developments, especially the Palestinian cause, Egyptian presidential spokesman Bassam Radi said in a statement on Facebook.

“Egypt supports all efforts to achieve a comprehensive peace in the Middle East, based on the two-state solution,” Sisi said during the meeting.

Sisi later said that he spoke with Bennett with “utmost honesty and courage,” adding, “Egypt always strives for peace, stability, development, and reconstruction, and steering clear of any form of conflicts.”

Bennett, for his part, said that he had an “important and very good meeting” with Sisi, in which the two leaders “laid the foundation for deep ties moving forward.”

He added, “After more than four decades, the peace agreement between Israel and Egypt continues to serve as a cornerstone in Middle East security and stability.”

Bennett also praised the significant role that Egypt plays in maintaining security in the Gaza Strip, as well as in helping secure the release of Israeli civilians and the bodies of two Israeli soldiers held by Hamas.

Egypt signed a peace treaty with Israel in 1979 after decades of conflict, and the two countries maintain full diplomatic relations. Yet their ties are still seen as a “cold peace.”

Tarek Fahmy, a lecturer at Nasser Higher Military Academy, and an expert in Israeli affairs told Al-Monitor that the visit is a pivotal development in Egyptian-Israeli relations.

Nimrod Goren, president and founder of Mitvim, the Israeli Institute for Regional Foreign Policies, told Al-Monitor that the meeting between the Egyptian and Israeli leaders showed that under the new Israeli government, relations between the two countries are likely to strengthen, and perhaps also be expanded to include new aspects of economic and civilian cooperation.

Prior to the meeting, Israeli Minister of Transport Merav Michaeli announced that the Egyptian state-owned EgyptAir will start operating direct flights between Cairo and Tel Aviv in early October; there will be four direct flights per week between Ben Gurion Airport and Cairo Airport.

On Sept. 13, Israel restored full operations at the Taba crossing with Sinai, an entry point for Israeli tourists, while lifting restrictions imposed during the pandemic.

In a tweet on Sept. 13, Israeli ambassador to Cairo Amira Oron described Bennett's visit as historic, considering it an important step in expanding mutual trade between Israel and Egypt.

“Recent steps [taken by Israel] are indications for positive progress,” Goren said. “The fact that the meeting took place in Egypt and that it was made public conveyed a positive [message] to the Israeli political system and the general public. It also reflected the regional legitimacy that Bennett is receiving as a leader, despite leading a right-wing party and despite initial concern in the Arab world about him being Israel’s prime minister.”

However, Hassan said that the meeting was more about the recent Egyptian moves on the Palestinian side than bilateral cooperation between Cairo and Tel Aviv.

Hassan added, “The meeting also came to test Israel’s position on resuming negotiations based on the two-state solution, as Cairo believes that the current circumstances require speeding up the resolution of the Palestinian cause.”

But Cairo's priority now is to reach a permanent cease-fire between Hamas and Israel, and initiate the reconstruction process in Gaza before winter, he noted.

For his part, Fahmy said, “Egypt did Bennett a favor by hosting him, making him and his government more popular in Israel, to urge him to engage in real negotiations with the Palestinians.”

He added that Egypt believes Bennett’s government is strong and working with it is an important opportunity to resume mediation efforts.

In May, Egyptian Foreign Minister Sameh Shoukry hinted that Cairo might host a negotiation round between the Israelis and Palestinians in the future.

Meanwhile, Fahmy stressed that Cairo is still reconsidering hosting the negotiation round, “but the action it took today is important,” in reference to the meeting.

Goren noted that launching an Israeli-Palestinian peace process in the traditional format of direct negotiations toward a final-status agreement does not seem to be feasible at the moment.

“However, Egypt could play an important role in deepening and expanding Israeli-Palestinian engagement, including via promoting practical cooperation between the sides and hosting a regional summit to which Bennett and Abbas will be invited,” Goren said. “Egypt should continue advocating for the two-state solution — also together with other international actors, working for intra-Palestinian unity, and mediating to reduce tensions in Gaza.”

Goren went on to say, “Toward the 20th anniversary of the Arab Peace Initiative in early 2022, it [Egypt] could also work with Saudi Arabia to present a revised version of the initiative, which will bring it [the initiative] up-to-date with regional developments that took place over the last two decades.”

However, Hassan said that Bennett will not recognize the establishment of a Palestinian state, as he believes that it poses a great danger to Israel. So negotiations may resume just to ease the punitive measures against the Palestinian people without resolving the essence of the conflict, he added.

Hassan pointed out that the US administration’s position remains a decisive factor in this issue, as Cairo is also relying on US pressure on Israel to dissuade it from its hardline positions.

Hassan pointed out that Sisi and US President Joe Biden could meet on the sidelines of the UN General Assembly meetings this month, and the issue may be raised at that time. “As long as the Palestinian cause is not resolved, peace will remain cold between Egypt and Israel, especially at the popular level,” he concluded.