Israeli Prime Minister Naftali Bennett's meeting with Egyptian President Abdel Fattah al-Sisi was the first visit by an Israeli prime minister to Egypt in a decade. 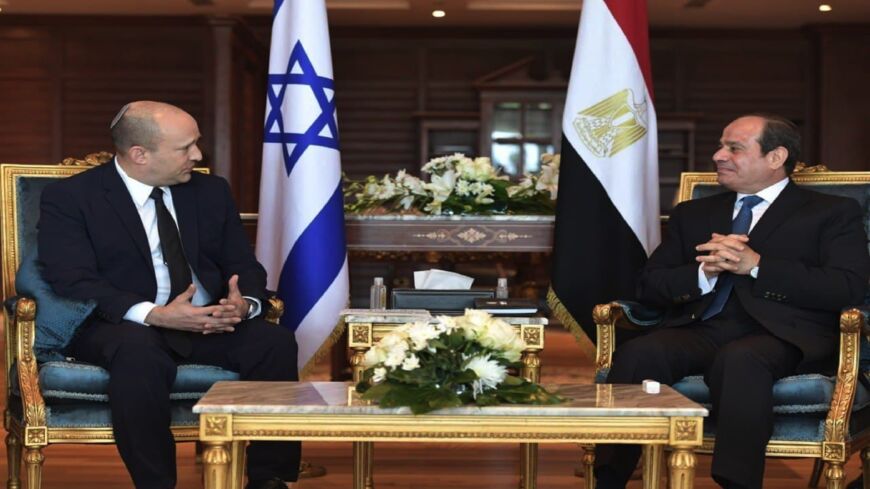 “The meeting was very important and very good. During the meeting, first and foremost, we created a foundation for deep ties in the future,” said Bennett in a statement.

The meeting in the coastal city of Sharm el-Sheikh was the first between Sisi and Bennett and also the first visit by an Israeli prime minister to the country in a decade. The two discussed bilateral relations, Egypt’s reconstruction assistance to the Gaza Strip and Israeli soldiers held by Hamas, according to the statement from Bennett’s office.

Sisi reiterated his support for a two-state solution to the Israeli-Palestinian conflict and also brought up Egypt’s reconstruction efforts and the importance of avoiding violence between Israelis and Palestinians, the Egyptian state-owned Al-Ahram news outlet reported.

Egypt established relations with Israel in 1980, becoming the first predominantly Arab state to do so. The two countries fought several wars before that. Despite the peace treaty, much of the Egyptian population is opposed to Israel.

Egypt under Sisi is heavily involved in Israeli and Palestinian affairs. Sisi hosted Palestinian President Mahmoud Abbas and King Abdullah II of Jordan for a visit earlier this month. In May, Egypt brokered the cease-fire between Israel and Hamas. Egypt then promised to deliver hundreds of millions in aid to Gaza to help with reconstruction following the war. Egypt is also working on reconciliation between the Palestinian Authority, Hamas and other Palestinian groups.

Egypt-Israel relations have improved recently. Bennett’s predecessor, Benjamin Netanyahu, maintained strong ties with Sisi, particularly regarding security cooperation in the Sinai Peninsula. Al-Qaeda, the Islamic State and other terrorist groups operate in the strategic territory. The trend has continued thus far under Bennett, who took office in June. Israel and Egypt both maintain a blockade over Hamas-controlled Gaza.