Ahead of Bennett’s visit to Washington, Israel tightens cooperation with Egypt

The invitation to visit Cairo and the agreement over the transfer of Qatari money to Gaza are important milestones for Prime Minister Naftali Bennett ahead of his visit to the White House. 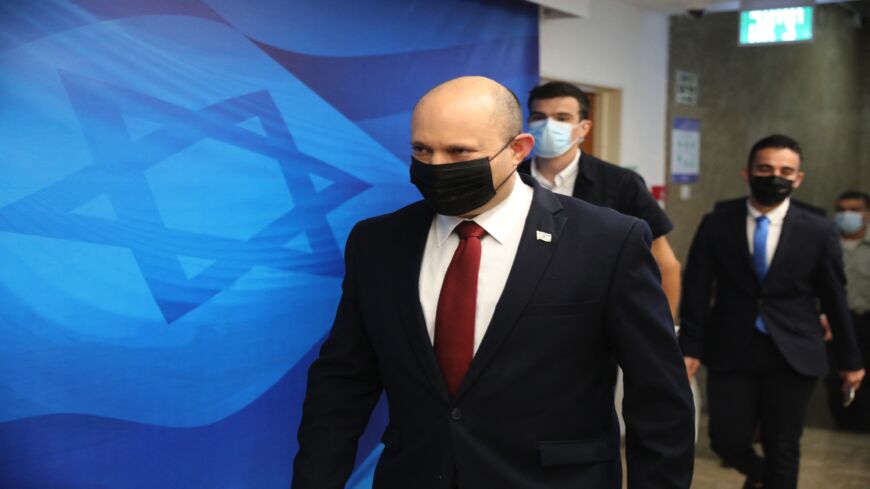 There was good reason for Egyptian President Abdel Fattah al-Sisi to dispatch his director of intelligence, Maj. Gen. Abbas Kamel, for the first high-level Egyptian meeting with senior members of the new Israeli government. “Kamel is the man closest to Sisi, his right-hand man in the full sense of the word, and that sends the exact message he wanted to convey,” a senior Israeli diplomatic source told Al-Monitor on condition of anonymity. That message, he added, was “the extent to which he is serious in wanting to forge cooperation and an intimate working relationship” with Israel’s new leadership.

Kamel met in Jerusalem on Aug. 18-19 with Prime Minister Naftali Bennett, Alternate Prime Minister and Foreign Minister Yair Lapid, Defense Minister Benny Gantz, and top Israeli defense and intelligence officials. At the same time, a senior, unnamed Israeli officer was visiting Cairo for talks on security issues. His agenda items included ongoing efforts to establish a long-term cease-fire with Hamas, which would also include returning the bodies of two Israeli soldiers and releasing two civilians held in Gaza. Contrary to previous visits, this time Kamel did not insist on secrecy, nor did he try to avoid photo-ops. “On the contrary,” the diplomatic source said, “They want their photos taken and they want to be seen with us, just like the Jordanians. Relations with Israel have become an asset rather than being a burden.”

Bennett’s people have changed their approach. Senior Israeli officials used to urge their Arab colleagues to publicize their meetings with Israelis, to provide photo-ops and flaunt the relationship, while the Arabs usually preferred to avoid doing so. These days, the Israelis are no longer pressing the Arabs, telling them instead that it is up to them to choose how they want to play these meetings. And lo and behold: The Arabs are keen on the limelight. The Egyptians need the relationship with Israel more than ever.

Relations with Egypt are different than with Jordan. Unlike the cold shoulder he gave Jordan’s King Abdullah, former Prime Minister Benjamin Netanyahu maintained close ties with Sisi. And Israeli-Egyptian cooperation in recent years broke all records, mostly, according to foreign publications, in efforts to uproot the Islamic State organization from the Sinai Peninsula. The Egyptians are now trying to signal that as far as they are concerned, it is business as usual with the new Israeli government too. They have no intention of suspending or downgrading relations, and perhaps even to the contrary. “Egypt needs us particularly in the Biden era,” the senior Israeli security official told Al-Monitor on condition of anonymity. “They emerged from the Trump era completely identified with the previous president; they want to signal through us to the Biden administration that they are present and interested in US recognition.”

Former President Donald Trump once dubbed Sisi his “favorite dictator.” Unlike Israel, which has undergone government change and discarded the Netanyahu baggage vis-a-vis Washington, the regime in Egypt remains intact and must recalibrate its course to make inroads into the Democratic White House. The senior Egyptian envoy’s visit to Israel coincided with the announcement of the date for Bennett’s first official Washington visit and meeting with President Joe Biden (scheduled for Aug. 26). Al-Monitor has learned that the Egyptians asked Bennett to stress to his American host and senior officials of his administration the importance of stability in Egypt for Israel and the entire Middle East. Bennett agreed willingly. Immediately following that meeting, it was reported that Sisi had invited Bennett to visit Egypt (they will likely meet in Sharm el-Sheikh once Bennett returns from the United States).

The last time a Democratic president held power in Washington (Barack Obama), a secular Egyptian president (Hosni Mubarak) was forced to step down. To this day, the Egyptians claim Obama “threw Mubarak under the wheels of the bus.” The Democrats, for some reason, keep assessing events in the Middle East according to the norms of liberal Western democracies, and in this regard, Sisi’s situation is not much better than Mubarak’s was. In fact, it might be worse. Biden’s victory was therefore received in Egypt with grave misgivings, but then came Israel’s Operation Guardian of the Walls against Hamas in May, affording Egypt a key role in efforts to arrange a cease-fire and stabilize the situation in Gaza. Israel helped Egypt take credit for its efforts and score points in Washington. What the Egyptians are now asking of Biden is a conciliatory attitude and understanding of the importance of a stable regime in Cairo. Israel is the main conduit of their campaign to convince the administration of this argument.

What does Israel want in return? Not much. Israel’s main concern is the growing extent of smuggling through the Rafah crossing serving Hamas’ growing military buildup. According to Israeli intelligence, Hamas is trying to replenish the rocket stock it fired at Israel during the fighting in May (in the Guardian of the Walls operation). The hermetic sealing of the Rafah crossing linking the Gaza Strip to Sinai, the source of Hamas weapons and ammunition, has been greatly weakened in recent years. Israel is now trying to persuade Egypt to redouble and upgrade its efforts to block supplies to Hamas arsenals. “We realize that nothing can be completely sealed,” another senior Israeli security source told Al-Monitor on condition of anonymity. “But we can try and minimize the leaks and smuggling level.”

Israel has mobilized the Americans, who have promised to cooperate closely with these efforts. The issue was raised in preparatory discussions in Washington ahead of Bennett’s visit and during last week’s visit to Israel on Aug. 11 of CIA Director Bill Burns. The goal is to upgrade the Rafah crossing in two stages. The first one would be immediate, consisting of Egyptian intelligence and physical efforts to reduce Hamas' abilities to smuggle weapons into the Gaza Strip. The second, later phase will include upgrading the crossing with sophisticated electronics that would greatly hamper smuggling and cut off various bypasses.

A day after Kamel’s visit to Israel, a new roadmap was issued with Hamas' approval for the transfer of Qatari assistance to needy Gaza residents. The cash-filled Qatari suitcases transported into Gaza in the past will be replaced with rechargeable magnetic cards for 100,000 Gaza families. The rest of the aid would be brought in in the form of fuel and oils. The remaining disagreement involves the pay of Hamas officials (civil servants), which has yet to be resolved. The Egyptians, as far as is known, did not take part in these negotiations, handled by Israel, Qatar, US representatives, UN officials and Hamas. Egypt and Qatar are bitter enemies, and the Egyptians keep away from anything involving Qatari funding for the Strip.

One tangible Egyptian achievement following Kamel’s visit was an advisory by the Counter-Terrorism Bureau downgrading the threat level for Israeli tourists in Sharm el-Sheikh. Israel knows such a declaration would increase the flow of Israeli tourists to the region and provide a type of “green light” for European tourism too. “We are doing everything possible to ease Sisi’s path,” a high-level diplomatic source in Jerusalem conceded to Al-Monitor on condition of anonymity. “At issue is our long-term strategic cooperation, and we hope the Americans regard it as such too.”

Barring surprises, Bennett lands in Washington next week for his first short (due to coronavirus limitations) visit as prime minister with a relatively favorable report card, having restored ties with Jordan and preserved cooperation with Cairo. As soon as he returns, Bennett hosts German Chancellor Angela Merkel. Not a bad beginning for a politician who garnered only six seats in the 120-member Knesset in the March elections and edged out the man (former Prime Minister Benjamin Netanyahu) who won 30 seats and is now on a private vacation far from the public eye at “the home of friends” in San Francisco.