The expected visit to Israel in a few days of Egyptian Intelligence Chief Abbas Kamel reflects the trend of rapprochement in recent months between Jerusalem and Cairo. 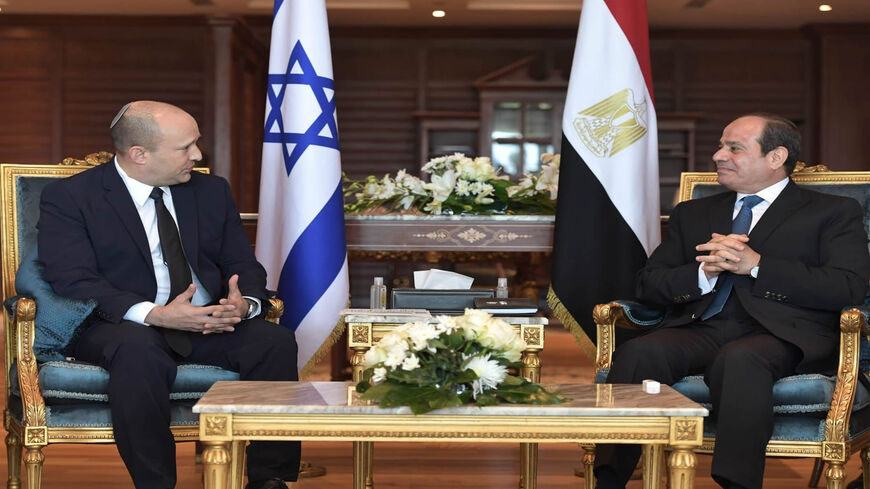 No one was surprised by this week’s announcement that head of the Egyptian General Intelligence Directorate Abbas Kamel is expected to visit Israel in the near future. This comes in the wake of a highly publicized Sept. 13 meeting between Prime Minister Naftali Bennett and his Egyptian counterpart, President Abdel Fatah al-Sisi, and a trip to Cairo by the heads of the National Security Council and the Shin Bet Nov. 14. And so, Kamel’s expected visit is the natural outcome of a warming in the relationship between Jerusalem and Cairo.

The latest developments in this relationship are dramatic. They come after four decades of a cold, and some might even say disaffected, peace between the two countries, at least in terms of their public statements. Behind the scenes, the two countries actually drew significantly closer over the last few years, particularly over matters of security. Reciprocal visits between high-level officials had become a matter of routine.

This somewhat clandestine relationship over security issues can be attributed to common interests shared by Israel and Egypt. Of particular importance are Israel’s security situation in dealing with the Gaza Strip and Egypt’s ongoing battle with Islamic State (IS) terrorists, who have posed a serious threat to security and stability in the Sinai Peninsula.

It wasn’t just Egyptians who have been losing sleep in the past few years over the security threat in Sinai. Israelis did, too. Jerusalem has been concerned that IS there would expand its terrorist activities to Israeli territory. It has even been worrying about the possibility that its terrorists would link up with terrorist groups in Gaza. Egyptian involvement in efforts to advance understanding with Hamas and secure quiet on that front have also become a major stake for Israel.

These common concerns and shared interests have led Nov. 7 to a revision of the security agreement between Egypt and Israel, increasing the number of Egyptian police that Israel allowed to be stationed in Sinai. Israel agreed to Egypt’s request to increase the presence of Egyptian forces in Sinai in order to help Egypt in its fight against IS militants in the peninsula.

The foreign press also reports on Israeli airstrikes against IS targets in Sinai, which benefited both Israel and Egypt. Until recently, however, it was more convenient for Egypt to keep this relationship in the shadows. While Egypt benefited from this cooperation, the Egyptian government was not held to public account for it.

Given all this, reports over the last few weeks of meetings between senior Israeli and Egyptian officials seem to indicate a deep-rooted shift in the relationship between the two countries. Evidently, the Egyptian president is no longer worried about internal public opinion, and it seems that Sisi feels confident enough to be open and forthright about the relationship between the Egyptian establishment and Israel.

Then, we have the Abraham Accords and the normalization of relations between Israel and moderate Arab states. It is now clear that these accords benefit Israel strategically well beyond the signatory countries. In fact, the Abraham Accords have had an enormous impact on Egypt. Simply put, Egypt does not want to be left behind. Cairo wants to boost the country’s status as a regional leader. It wants to remind the world — and the nations of the Middle East in particular — that it was the first Arab state to sign a peace agreement with Israel.

With a new government in Jerusalem, and a new administration in Washington, Cairo is also recalculating its alliances. It is now engaged in a bid to grant greater visibility to its improved relationship with Israel. Sisi wants more aid from the Biden administration, but he is also concerned about criticism from the Democratic Party of his regime’s human rights abuses. Much like the rest of the Middle East, Cairo realizes that Washington may show less interest in the region than it did in the past. Nevertheless, Israel remains an important focal point for the current US administration.

These interests and others are what led both Egypt and Israel to be so public and open about the leaders’ meeting last September, the first since Bennett entered office this year. Both countries went out of their way to report that the mood at the meeting was good, and that they discussed the Iranian nuclear program, Iran’s efforts to establish itself in the region and efforts to restore calm in Gaza. A statement issued by Bennett’s office praised Egypt's significant role in bringing security to the Gaza Strip "and in finding a solution to the issue of the [Israeli] captives and missing."

We have already mentioned the revision of the security agreement earlier this month, amending the security clauses of the 1979 peace agreement between the two countries. In an unusual move, a photo was released from that meeting, showing Israeli and Egyptian officers standing side by side.

Jerusalem knows that Cairo is a key player in everything involving its relationship with the Gaza Strip. Cairo was the main mediator in the recent rounds of violence. Foreign reports recently claimed Israel and Egypt are discussing a new outline for a prisoner exchange deal: a process that has been caught in stalemate for over seven years. Reportedly, this was also a major issue in last week’s talks by head of the National Security Council Eyal Hulata and Director of the Shin Bet Ronen Bar with Egyptian Intelligence Minister Abbas Kamel. It should be noted, however, that preliminary reports about the specific outline under discussion turned out to be inaccurate and were even denied by the Egyptians.

That being said, the current assessment in Israel is that unless something unexpected happens, there will be no real progress in a prisoner exchange deal as long as Bennett is prime minister. The problem is that Bennett is facing a very difficult political situation at home. Although he is prime minister, he has almost no public support. He is therefore breaking right in an attempt to improve his standing in the polls.

Bennett is determined to prove that despite his political maneuvering to bring down the right-wing government of former Prime Minister Benjamin Netanyahu, he remains loyal to his principles. As a result, it is believed that he will have a hard time signing a deal in which Palestinian prisoners “with blood on their hands” will be released in exchange for the bodies of two fallen soldiers and for the two civilians being held by Hamas.

Despite these pessimistic assessments in Israel, no one in Jerusalem will state publicly that it is giving up on a prisoner exchange deal because of Israel’s precarious political situation. Furthermore, continued discussions about such a deal give Hamas a modicum of hope and may even reduce chances that it will instigate another violent conflict with Israel. The very fact that Israel and Hamas are in indirect discussions over a prisoner exchange also serve Egyptian interests. Being seen by the Americans as a positive player in the region would make Egypt a more likely recipient of increased defense aid.