Ever since the signing of the peace treaty between Israel and Egypt almost 37 years ago, Israel and Egypt have been fostering security ties, but it is the Sisi regime that brings these ties to a new, unprecedented level. 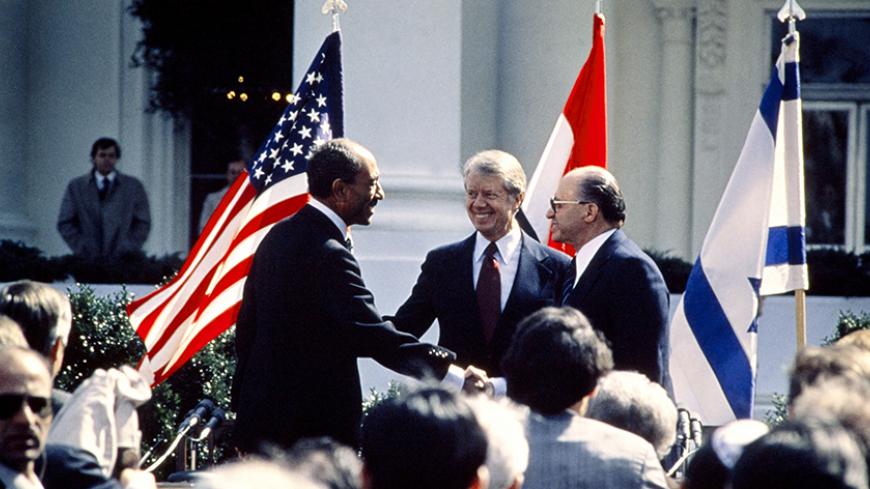 Egyptian parliament member and TV talk show host Tawfiq Okasha let the genie out of the bottle. Even though a shoe was thrown in his face by Kamel Ahmed, another parliament member, and despite the savage attacks directed at him in the Egyptian media and public forum in recent days, the sharp-tongued, brazen Okasha doesn’t get excited. His crime was defined by the media as “the crime of normalization,” for the fact that he invited Haim Koren, Israel’s ambassador to Egypt, to his house for dinner on Feb. 24. Okasha even heaped praises on the ambassador and on the collaboration and normalization of relations between Israel and Egypt.

Okasha wouldn’t have dared to invite Koren without a wink from someone upstairs. He knows that Egypt’s higher stratums — from the president to the regime’s high echelons, the military, intelligence and the elites — view Israel as an important, powerful ally in regional struggles. But “the other Egypt,” the lower echelons, have not yet internalized this change. The masses, together with most of the politicians, public opinion leaders, journalists and writers still view the Jewish state as a type of satanic entity: the eternal, mythological and hated enemy. And they see no reason to moderate their view of the Jewish state at this time.

The peace agreement between Israel and Egypt was signed in March 1979, almost 37 years ago on the White House lawn, at a ceremony attended by Prime Minister Menachem Begin, US President Jimmy Carter and Egyptian President Anwar Sadat. The agreement has survived many vicissitudes over the years and demonstrates impressive stability, but has no effect on the lives of the Egyptian masses. Normalization does not exist; Egyptian citizens were barred from visiting Israel by the mukhabarat (Egyptian secret service). Any flash or hint of any kind of cooperation with official Israeli sources, any clue of an Israeli presence in culture, films or literature immediately encounters a barbed-wire wall of invectives, vituperation and violence from all sides.

The stormy love affair between Egypt and Israel is dramatic and clandestine. Israel’s military censorship forbids dissemination of exact details of the deepening cooperation between the states. It was actually Egyptian President Abdel Fattah al-Sisi, in an interview with the Washington Post in March 2015, who said that he speaks to Prime Minister Benjamin Netanyahu frequently, sometimes several times a month. In reality, Sisi talks to Netanyahu even more than that, and not only to Netanyahu.

On the list of Egypt’s close allies, Israel’s name is a front-runner. It is almost unprecedented how so many of the interests of the two countries have converged and complement one another. Even the list of enemies held by Israel and Egypt includes the same names, more or less.

It is very convenient for Sisi to secretly enjoy the fruits of Israel’s intelligence, experience and power, while publically allowing his nation’s masses to curse and abuse Israel as an anger-channeling tool and a type of demon or scapegoat that can be blamed for all of Egypt’s socio-economic problems. Nonetheless, it is clear that the closeness between Sisi and Israel’s highest echelons is not a superficial one. “Sisi understands the situation,” said a high-ranking Israeli security source speaking on condition of anonymity. “He knows exactly whom he can trust in the region and whom he can’t. He knows what’s good for Egypt and, under the correct circumstances, what’s good for Egypt is also good for Israel.”

Following the incident in which Koren dined at Okasha’s table, the Israeli ambassador told Channel 10 that he himself met personally with Sisi recently a number of times. This, too, is unprecedented. Until the Sisi era, Israeli ambassadors in Egypt were ostracized outcasts: They were holed up in an isolated embassy, totally cut off from the country around them. They spent their weekends in Israel in order to breathe some fresh air and mingle with other people. Suddenly, the Israeli ambassador has become a welcome, frequent guest in the Egyptian president’s premises.

Sisi, who long served as a general, himself is well-acquainted with, and close to, Israeli Chief of Staff Lt. Gen. Gadi Eizenkot. They once served in parallel positions in the Israel Defense Forces (IDF) and the Egyptian army. Thus, their cooperation extends over many years, and they share a common language and mutual respect. Sisi and his generals also share close relationships with the IDF higher-ups.

For the first time in many generations, intelligence information is almost totally shared between the sides, mainly with regard to the struggle against the Islamic State (IS) branch in the Sinai Peninsula. Israel and Egypt rely on one another in their joint struggle against Hamas and IS. “As far as the Egyptians are concerned,” a senior Israeli military source told Al-Monitor on condition of anonymity, “the Muslim Brotherhood is comparable to the Nazis. Hamas is perceived as an arm of the Muslim Brotherhood; thus, they are viewed as an enemy that must be destroyed. The Islamic State has joined this equation recently, and they share the exact same rubric.”

For many long years, Israel begged the Egyptians to block Hamas’ tunnels — tunnels that allowed Gaza to become a veritable storehouse of weapons, rockets and missiles. Under former President Hosni Mubarak, and also under his successor, Mohammed Morsi, Egypt almost didn’t lift a finger. Egypt's actions were half-hearted and had little effect on reality. By contrast, Sisi adopted this mission with great zeal, and the Egyptians destroyed all of the tunnels. Some were flooded with ocean water and some were blocked up. They did this out of unmistakable Egyptian interests: Intelligence information, some of which came from Israel, point to tight coordination between Hamas and Ansar Bayt al-Maqdis in Sinai, which turned into a local branch of IS. Sisi declared an all-out war on IS, and he could not have made any achievements without the great assistance he received from Israel, in many different spheres. According to a high-placed Israeli military source, speaking on condition of anonymity, “The efficacy of the Egyptian army in its war against IS is gradually improving. This is true for intelligence, for preciseness and for rapid response. The Egyptians know that Gaza’s Hamas provides IS with military experts, they know that wounded Sinai IS operatives are treated in Gaza, they know that there is a direct, close connection between the sides. Thus, they try to block all passageways between the Gaza Strip and Sinai.”

According to IDF officials, if there’s one place in which it is possible to sound the death knell for IS and defeat it unconditionally, that place is Sinai. “We are looking at an isolated peninsula. IS is cut off from the rest of the world. They are surrounded by Egypt and Israel. Their power is limited; we’re talking about a couple of hundred fighters, that’s all,” said an Israeli military source, speaking on condition of anonymity. “It’s all a question of determination and resolve. If Sisi will demonstrate determination over time, he can win a historic victory in Sinai.”

Paradoxically, when it comes to the Gaza Strip, Israel and Egypt’s interests diverge. Cairo, on the one hand, declared an all-out war on Hamas, including the closure of the Gaza Strip and throwing the keys into the ocean. But Israel, on the other hand, has come to the understanding that the Gaza pressure cooker is liable to blow up powerfully again in Israel’s face, a la the 2014 Operation Protective Edge model. Though Israel’s political echelon still rejects the pleas of the military echelon regarding planning a naval port for Gaza, the proposal regarding allowing Gaza laborers to work in Israel and the efforts to alleviate the living conditions there show that Israel clearly understands the situation. The Egyptians, by contrast, take these elements into account much less. When Gaza erupts, it becomes Israel’s problem, not Egypt’s.