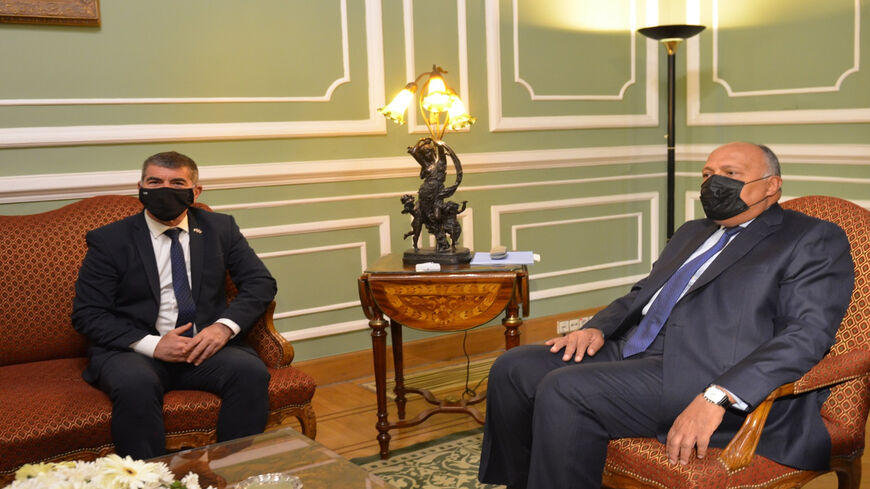 Israeli Foreign Minister Gabi Ashkenazi arrived in Cairo May 30 for talks with his Egyptian counterpart, Sameh Shoukry. It is the first time in almost 13 years that an Israeli foreign minister has paid an official visit to Egypt. Ashkenazi was accompanied by Ambassador to Egypt Amira Oron, Foreign Ministry Director Alon Ushpiz, Director of the Middle East Division Haim Regev and other Israeli diplomats.

Ashkenazi’s historic visit came after Israel and Hamas agreed last week on a cease-fire, ending 11 days of extensive Gaza rocket fire against Israeli cities and Israel Defense Forces (IDF) retaliation against Hamas targets. Ahead of the meeting, Ashkenazi said, "We will discuss establishing a permanent cease-fire with Hamas, a mechanism for providing humanitarian aid and the reconstruction of the Gaza Strip with a pivotal role played by the international community. First and foremost, Israel is fully committed to returning our MIA's held by Hamas."

In his last remark, Ashkenazi was referring to Israeli civilians Avraham Avera Mengistu and Hisham al-Sayed, who crossed the border into the Gaza Strip in 2014 and 2015, respectively. Both men reportedly suffer from mental health issues and are held by Hamas. Hamas is also holding the bodies of IDF soldiers Hadar Goldin and Oron Shaul, killed in the 2014 Gaza war.

After the meeting, Ashkenazi tweeted, “Ending an important official visit to Egypt as a guest of Foreign Minister Sameh Shoukry. We discussed enhancing economic and trade cooperation, including the renewal of direct flights between our countries. Egypt is an important regional ally, committed to security and stability, and the maintenance and expansion of peace in the region. We all need to act to prevent strengthening extremist elements that threaten regional stability, and to ensure the return home of the missing persons and prisoners held by Hamas.”

Ashkenazi also said after the meeting, “The Guardian of the Walls Operation and the enlargement of the circle of countries with whom Israel has peace treaties, have generated an opportunity to strengthening ties and cooperation between Israel and Arab states.”

Reportedly, talks between Ashkenazi and Shoukry focused on measures to guarantee the continuation of the Egyptian-mediated cease-fire with Hamas, the reconstruction of Gaza and a potential prisoner exchange deal with Hamas. Ashkenazi made it clear after the meeting that Jerusalem would not accept any agreement on Gaza reconstruction without an advancement on the issue of returning the Israeli civilians and the bodies of the IDF soldiers held by Hamas to Israel. The two ministers further discussed the Israeli project of constructing a new embassy building in Cairo, and resuming direct flights between Israel and Sharm al-Sheikh in the Sinai Peninsula.

It now seems that such a prisoner exchange deal could indeed be on the horizon, as Hamas spokesman Abdelatif al-Qanou said the group was open to discussing a prisoner swap with Israel. Defense Minister Benny Gantz said last week that Israel will not permit the full reconstruction of Gaza or the entry of nonhumanitarian aid through Israeli crossing points, until Hamas releases the two Israeli civilians and the two bodies.

While Ashkenazi went to Cairo, Prime Minister Benjamin Netanyahu met May 30 in Jerusalem with Director of the Egyptian General Intelligence Abbas Kamel. A statement issued by Netanyahu’s office said, “The two men discussed strengthening cooperation between Israel and Egypt as well as regional issues. They praised the ties and understandings, and the countries' joint effort on various security and diplomatic issues. Prime Minister Netanyahu raised Israel's demand for the prompt return of the soldiers and civilians being held in the Gaza Strip. Also discussed were mechanisms and processes to prevent the strengthening of Hamas and its use of the resources that will be directed to the civilian population in the future.”

In a meeting later in the day between Kamel and Intelligence Affairs Minister Eli Cohen, it was agreed that security delegations from Israel and Egypt will meet June 22 in Sharm al-Sheikh, to discuss security arrangements for flights from Israel and for resuming Israeli tourism. The two men also agreed to arrange mutual business delegations in the near future.

Also on May 30, Israel’s Army Radio said that Egypt was hoping for Israel and the Palestinian Authority to restart formal talks on policy issues in the wake of the visit.