An Israeli delegation is expected to arrive in Cairo in the very near future, to continue discussing with the Egyptians a framework for an arrangement with Hamas. 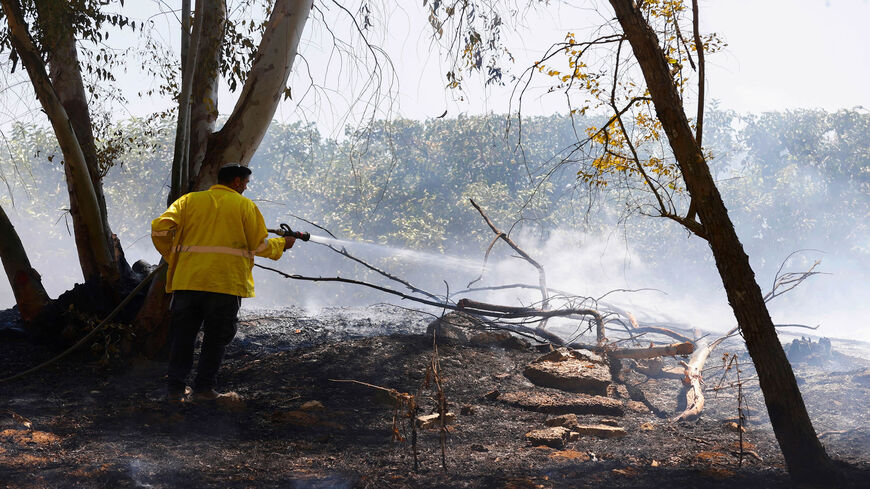 A worker with the Israel Nature and Parks Authority extinguishes a fire in a field near Kibutz Alumim that was reportedly caused by an incendiary balloon launched from the Gaza Strip, Aug. 24, 2020. - Jack Guez/AFP via Getty Images

Several fires broke out in the Eshkol region in the south of Israel June 16, apparently sparked by balloons carrying incendiary devices launched from the Gaza Strip. It was the second day in a row that such fires broke out. After the first day of fires, the Israeli army launched airstrikes against Hamas targets in Gaza. But last night, no strikes were carried out. Reportedly, the Israel Defense Forces (IDF) are now expecting for Gaza balloon attacks to calm down.

Hamas was reportedly surprised by the Israeli retaliation over the incendiary balloons, conveying to Israel a message via Egypt that they will not accept such a response. Israel reportedly answered that even if it did not retaliate last night over the balloons, it will under no circumstances accept that such attacks continue.

At the same time, Israeli press reports about messages conveyed by Israel’s new government, over its willingness to continue with efforts for an arrangement with Hamas. An Israeli delegation headed by the National Security Council is expected to arrive to Cairo already this week for talks with their Egyptian counterparts. The delegation will discuss a framework for an arrangement with Hamas and also the issue of the bodies of IDF soldiers and the two Israeli civilians held by the group, with the possibility of a prisoner exchange deal. The reports said gaps between the sides are still big, but there is willingness to advance.

Newly appointed head of the Knesset security ad foreign affairs committee Ram Ben-Barak said June 17, “Bringing in the Egyptians on board on this issue is the right move. In the [2014] Protective Edge Operation [in Gaza], it was the Qataris leading the arrangement [between Israel and Hamas], and that proved to be difficult.”

Evidently, while tensions on the Israeli border with Gaza increase, Egypt keeps its efforts to advance talks between the sides. Reports at the beginning of this week said that Egypt had notified Hamas it intends to open a new round of mediated talks with Israel.

On June 14, the day he took office, Foreign Minister Yair Lapid shortly addressed relations with Egypt. “Great things have happened this past year. We need to continue the development that started with the Abraham Accords, to work to strengthen the peace with the Gulf States, with Egypt and with Jordan," said Lapid.

Two days later, Egyptian Foreign Minister Sameh Shoukry referred to his country’s future relationship with Prime Minister Naftali Bennett's new government, stating, "Egypt is striving to work with [the Israeli government] to advance the peace process with the Palestinians, and to bring about the establishment of an independent Palestinian state based on a two-state solution. Egypt seeks to bring the conflict to an end, which will bring stability and peace to the region."

The statements of Lapid and Ben-Barak, and the expected Israeli delegation to Cairo, indicate an understanding in Jerusalem within the new government that the key to a long-term calm on its southern border with Gaza is Egypt. In fact, sources at the Foreign Ministry told Al-Monitor that while Israel will by no means accept for the Gaza balloon terror to go on, Lapid is expected to continue with the same approach as his predecessor Gabi Ashkenazi of strengthening ties with Egypt, both in the security realm and in other fields. Indeed, Ashkenazi in person had arrived in Cairo May 30 for talks with Shoukry. It is the first time in almost 13 years that an Israeli foreign minister has paid an official visit to Egypt.

This forging alliance and mutual trust between Jerusalem and Cairo stand in contrast to Jerusalem’s ties with Brussels in the last days of the Netanyahu government. On June 9, Foreign Ministry representatives refused to meet with European Union representative for the Middle East peace process Sven Koopmans during his visit to the region. Jerusalem was expressing its dissatisfaction over comments made by the European High Commissioner for Foreign Affairs Josep Borrell during Operation Guardian of the Walls. Borrell had blamed Israel for using disproportionate force against Gazans, omitting any reference to the 4,300 rockets Hamas had fired at Israel.