Israel has been quiet on its contacts with Egypt throughout the latest security crisis, but the agreement on the cease-fire with Hamas, Friday's phone call between the two foreign ministers and the reopening yesterday of two Gaza crossing points for humanitarian aid reflect growing cooperation between Jerusalem and Cairo. 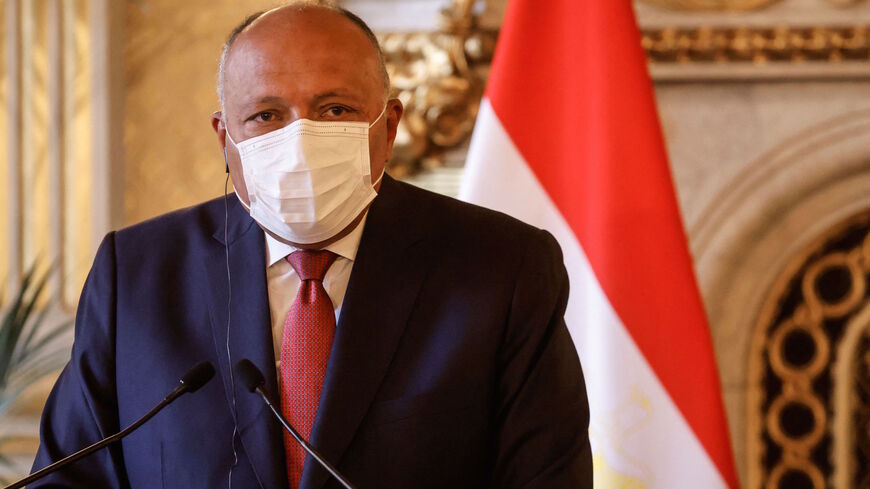 Egypt's Minister of Foreign Affairs Sameh Shoukry speaks during a joint press conference following a meeting on the Middle East Peace process, at the Quai d'Orsay, in Paris, on March 11, 2021. - LUDOVIC MARIN/POOL/AFP via Getty Images

In a first sign of advancement since the cease-fire agreement with Hamas, Israel partially reopened yesterday the Erez and the Kerem Shalom crossing points into the Gaza Strip. Up until Monday, the two crossing points were completely closed, but yesterday Israel enabled UN agencies to bring in to the Strip humanitarian medical aid. It also enabled aid workers and foreign reporters to enter.

In another positive development, Secretary of State Anthony Blinken arrived this morning at the Ben Gurion airport. His first step in a regional tour that includes Israel, the Palestinian Authority, Jordan and Egypt. According to an unnamed senior at the State Department, the goals of the three-day trip are to ensure that the cease-fire between Israel and Hamas holds while also pushing steps that will improve the quality of life for both sides (Israeli and Palestinians) in the absence of immediate peace talks.

The regional meetings of Blinken are expected to cement what has already proven to be efficient contacts between Jerusalem and Cairo. This was evident last Friday, as Foreign Minister Gabi Ashkenazi and his Egyptian counterpart, Sameh Shoukry, spoke on the phone hours after the Cairo-mediated cease-fire between Israel and Hamas went into effect. The conversation focused on mutual efforts to stabilize the deal.

A statement by Egypt’s Foreign Ministry said the ministers agreed on the importance of coordination between the countries and together with the Palestinian Authority and other international partners, in order to secure communication channels to achieve peace. Other reports said Ashkenazi told Shoukry Israel was keen to maintain calm. Reports said the two men also discussed measures to facilitate the future rebuilding of Gaza.

After the meeting, Ashkenazi tweeted, “On Friday, I had an important conversation with Egyptian Foreign Minister. I thanked him for Egypt’s effort and commitment to achieve peace and stability in the area. I emphasized to him that any future arrangement would have to include guarantees regarding security issues and policy principles, especially restoring peace and stability to the residents of southern Israel, stopping Hamas armament, and Israel’s commitment to returning Israeli citizens illegally held by the terrorist organization. We agreed to meet soon and continue to discuss these issues.”

The conversation between the two ministers reflects the significant role played by Cairo since the outbreak of the latest escalation in efforts to find a solution and reach a cease-fire. Ashkenazi’s tweet about meeting Shoukry soon says the same. And while President Joe Biden was clearly engaged in forcing Prime Minister Benjamin Netanyahu’s hand into accepting the deal, growing mutual confidence between Jerusalem and Cairo was clearly an essential element in succeeding to close it.

Reports from May 14 claimed Israel rejected a first proposal by an Egyptian delegation for a one-year truce that was to be monitored and coordinated by Cairo. These reports said the delegation had also urged Israel to stop targeting senior Hamas officials, arguing that once the targeted killings are stopped, they might be able to convince Hamas and the other Palestinian factions to commit to the proposed truce. Evidently, after the rejection, contacts between Jerusalem and Cairo continued until a cease-fire was reached.

Over the past two years, Egyptian delegations have been arriving to Tel Aviv and Gaza every few months or so, each time with the same purpose of advancing quiet on the Gaza border. Thus, for instance, an Egyptian security delegation arrived to Gaza in March 2019 to convince Hamas to halt the incendiary-balloon terror against Israel. The delegation, headed by deputy head of Egyptian intelligence Amr Hanafi, was joined by Hama Abu-Zid, Egypt’s consul at its embassy in Tel Aviv.

Jerusalem is usually very quiet on its diplomatic contacts with Cairo. On May 18, Danny Zaken published that Egypt is considering donating half a billion dollars for the reconstruction of the Strip. Reports this weekend say Egypt is considering convening a regional donors conference to help in Gaza's reconstruction. Apparently, an Egyptian delegation visited Gaza again on May 23. Other than following up on the cease-fire, the delegation reportedly started assessing the material damages caused to Gaza.

Official Israel did not react specifically to offers made by Egypt, Qatar or any other country to help rehabilitate the Strip. Still, Defense Minister Benny Gantz did address on Sunday the need to make sure that any assistance funds and any construction material funneled to Gaza won’t reach Hamas or serve for the reconstruction of its attack tunnels. Are Jerusalem and Cairo coordinated on that? Reports on the abovementioned phone call between Ashkenazi and Shoukry last Friday suggest that this might be the case.