A year and a half after her initial nomination, the Israeli government has finally approved the appointment of Amira Oron as ambassador to Egypt. 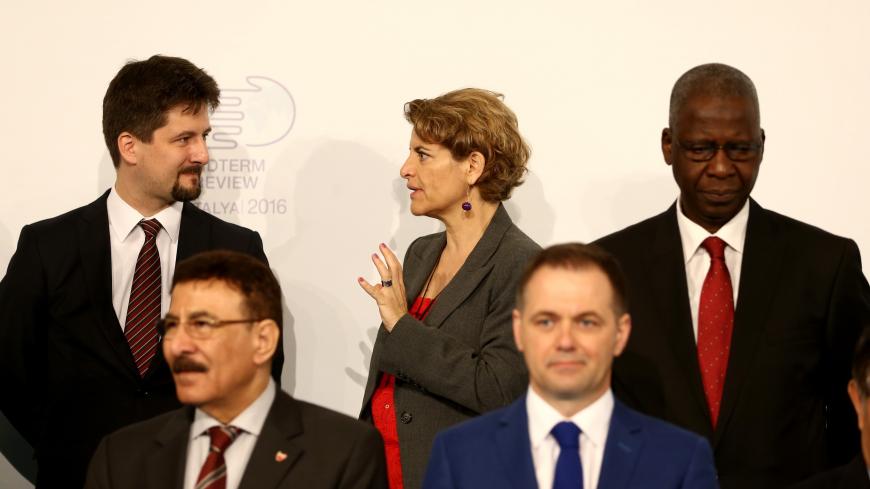 Israel's chargé d'affaires in Turkey, Amira Oron (C), poses for a family photo during the Midterm Review of the Istanbul Programme of Action in Antalya, Turkey, on May 27, 2016. - Gokhan Balci/Anadolu Agency/Getty Images

Israel’s government approved the appointment of Amira Oron as the country’s new ambassador to Egypt on June 7, the first woman to ever serve in the position. Foreign Minister Gabi Ashkenazi congratulated Oron, hailing a competent and highly skilled diplomat. Ashkenazi stated he was sure that Oron would effectively promote bilateral relations.

The Foreign Ministry’s appointment committee selected Oron for the ambassadorship in October 2018, but her candidature was not brought for cabinet approval until today. The long delay was caused by Prime Minister Benjamin Netanyahu, who was then serving also as foreign minister and had hoped to appoint Likud lawmaker Ayoud Kara instead. Ranked 39th spot on the Likud list for the 2018 elections, Kara did not make it into the Knesset. The next year, Netanyahu moved to compensate him by appointing him to the embassy in Cairo.

Netanyahu’s proposal generated public outcry. Oron is considered very experienced and Israel has always made a point of appointing highly professional ambassadors to Egypt, such as Haim Koren and David Govrin. Proposing a new candidate after one has already been picked was practically unheard of. To complicate things, Kara has been involved in several diplomatic incidents. For example, in 2016, he disclosed sensitive security information and the Moroccan government complained about Kara meeting with a representative of Western Sahara. Israeli parliamentarians objected to Kara’s nomination to the sensitive post and Netanyahu had to back off, leaving the position vacant.

All this time, Oron was left waiting for a decision to be made on one of Israel’s most strategic embassies. Many Israeli diplomats complained that the situation was unacceptable, that ties with Egypt were much too significant for the embassy in Cairo to function without an ambassador at its helm.

Oron previously headed Israel’s embassy in Turkey. She speaks Arabic and is an expert on the Middle East. She has also served as a deputy spokesperson, head of Arab communications and as head of the government's Egypt department.

"Amira Oron is an excellent choice for the job," a senior diplomat told Al-Monitor on condition of anonymity. "Keeping her in Jerusalem was a pure waste of time and surely did not contribute to our relations with Egypt. Oron is the face of Israel’s new diplomacy. She knows her stuff, she speaks the language, she has the experience, she has demonstrated her resilience when serving in Ankara at a particularly complicated period."

Oron will face a series of challenges in Cairo after a year and a half without an ambassador. Security and anti-terrorism cooperation between Israel and Egypt are at an all-time high, both on Gaza and on the Sinai Peninsula. Still, most of the bilateral contacts have remained in the security realm for many years. As Israel's new ambassador to Egypt, Oron has her work cut out for her.