Amira Oron is an experienced diplomat, who was supposed to be the first woman to serve as Israel’s ambassador to Cairo; yet one year after her appointment was approved by the Ministry of Foreign Affairs, she is still sitting at home. 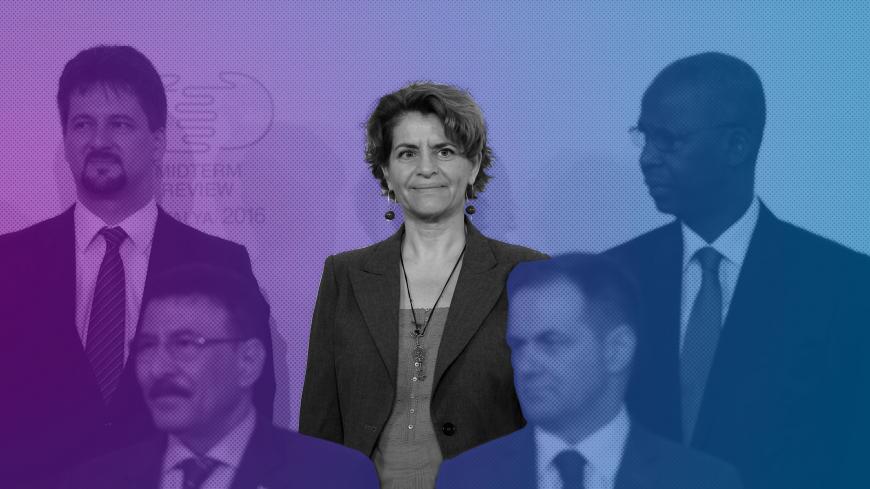 Israel's chargé d'affaires in Turkey, Amira Oron (C) poses for family photo during the Midterm Review of the Istanbul Programme of Action in Antalya, Turkey, May 27, 2016. - Gokhan Balci/Anadolu Agency/Getty Images

Almost a year has gone by since the Israeli Ministry of Foreign Affairs announced, on Oct. 29, 2018, that Amira Oron would be the country’s next ambassador to Egypt. Oron is an experienced diplomat, who speaks Arabic and already served in both Cairo and Ankara. She was supposed to be the first woman to serve as Israel’s ambassador in the Egyptian capital since the signing of the 1979 peace agreement between the two countries. The problem is that one year after her appointment was confirmed by the Foreign Ministry’s Appointments Committee, Oron has been sitting at home, while the embassy in Egypt has no ambassador. Since the situation could be harmful to the bilateral relationship between the two countries, the inevitable question is: What went wrong with this important appointment, and why has the government not approved it?

With Israel and Egypt about to mark 46 years since the outbreak of the 1973 Yom Kippur War (known as the October War in Egypt), it is impossible to ignore the enormous advantages of the peace reached after that terrible war. Despite everything the region has experienced, the peace agreement between Israel and Egypt has somehow managed to survive. It may be a cold peace, but it is peace nonetheless.

One tangible symbol of that peace is the Israeli Embassy in Cairo. In 2005, when the embassy was still located in Dokki neighborhood, it even featured in the Egyptian comedy “The Embassy Is in the Building” starring actor and comedian Adel Iman. A few years later, in 2011, the embassy building was attacked by an angry mob, and the security detail trapped inside could only be extracted with great difficulty. Since then, Israel has not found the time to locate a new permanent site to meet the embassy’s needs.

Eli Shaked, a former ambassador to Egypt (2003-2005) told Al-Monitor, “The Israeli ambassador in Egypt is also considered a symbol of the bold relationship formed between the two nations, even if he is boycotted by certain segments of Egyptian society and placed under severe security considerations.”

He said, “The Israeli ambassador serves as the flag of the State of Israel, and right now, we don’t have an ambassador in Cairo. I suppose that the people in the street, who don’t particularly like us, are happy about this. And so are various BDS [Israel boycott movement] supporters there. These days however — and in fact, since [Egyptian President Abdel Fattah] al-Sisi came to power — the ambassador has more room to maneuver and can even meet with government ministers and other top officials. The problem is that since there is no ambassador, there is no one to do that.”

Shaked had only good things to say about the appointment of Oron, who is well known and popular in Egypt. In June, he joined a group of former Israeli ambassadors to Egypt that signed a sharp letter condemning Prime Minister Benjamin Netanyahu’s plan to appoint Ayoub Kara, then-minister of communications, as Israel’s next ambassador to Cairo. “We have nothing against Ayoub Kara per se, but Cairo needs a skilled diplomat, who will be able to tell left from right as soon as he lands,” Shaked added.

For a long time now, a dismal mood has pervaded the Foreign Ministry, resulting, as its staff claims, from a decline in the ministry’s stature. This is seen in the freezing of budgets, a decline in wages and cronyism. According to a senior diplomat who spoke to Al-Monitor on condition of anonymity, the delay in Oron’s appointment is just one of many examples of what the government really thinks about the importance of Israeli diplomatic missions overseas.

“I worry that the failure to appoint an ambassador to Cairo sends a disparaging message to the largest Arab state, whose relationship with Israel is so important to us,” the diplomat said. “We have been saying for a long time now that we need to expand this relationship, so that it is not based exclusively on security issues. So what happened? Why did all of that suddenly change?”

After 40 years of a chilly but stable relationship between the two countries, Israel’s leadership seems to prefer focusing on the security aspect of Israeli-Egyptian relations. These have, in fact, flourished over the past few years. Israel and Egypt cooperate in fighting terrorism in the Sinai Peninsula, with security forces from both countries coordinating their efforts exceptionally well, due largely to the close relationship that Netanyahu maintains with Sisi. At a meeting of the Knesset’s Foreign Affairs and Defense Committee in 2017, a representative of the National Security Council even admitted that continuing the security relationship with Egypt is more important to the prime minister than the diplomatic relationship, including embassy staffing. (At the time, the Israeli ambassador had been away from Cairo for eight months due to security considerations.)

On the other hand, Foreign Ministry staff, former ambassadors, and historians and researchers who focus on Israel’s foreign affairs all agree that the relationship between Israel and Egypt must not rely on security affairs only. Nimrod Goren, head of the Mitvim Institute for Regional Foreign Policies, told Al-Monitor that, as a matter of principle, reducing the relationship between the two countries to military affairs should not be condoned. “Egypt may have its own positions, but the message from Israel must nevertheless be consistent. The Israeli ambassador is in Cairo, establishing contacts and making sure to be heard. Similarly, the relationship with Egypt has recently assumed certain civilian dimensions, which did not exist earlier. The Gas Forum has been created, and Egyptian pundits and commentators have started to appear in the Israeli media. Our ambassador could help push forward with all of this,” Goren said.

Mona Prince is an Egyptian researcher, who has met with former Israeli Ambassador David Guvrin, who left Egypt in August. She told Al-Monitor that Cairo is eager to see Oron in the position, because of her particular skills, but also because she would be the first woman to serve in the position. “I think that these days, Egypt no longer has such negative attitudes toward the Israeli ambassador. I hope she arrives soon and promotes cooperation on all levels,” Prince noted.

Foreign Ministry officials say that there is nothing to prevent posting the new ambassador during a transition government, since it is not a political appointment. At the same time, it seems obvious to everyone that until a new government is formed in Israel — or as some people would have it, if a new government is formed at all — the Israeli Embassy in Cairo will continue to operate with no one in charge.