Israel sets conditions for talks with Palestinians via Egypt

Reports say Israel is interested in the Egyptian initiative for indirect talks with Hamas, but conditions Hamas on advancing the return of Israeli captives and bodies of soldiers held by Hamas in the Gaza Strip. 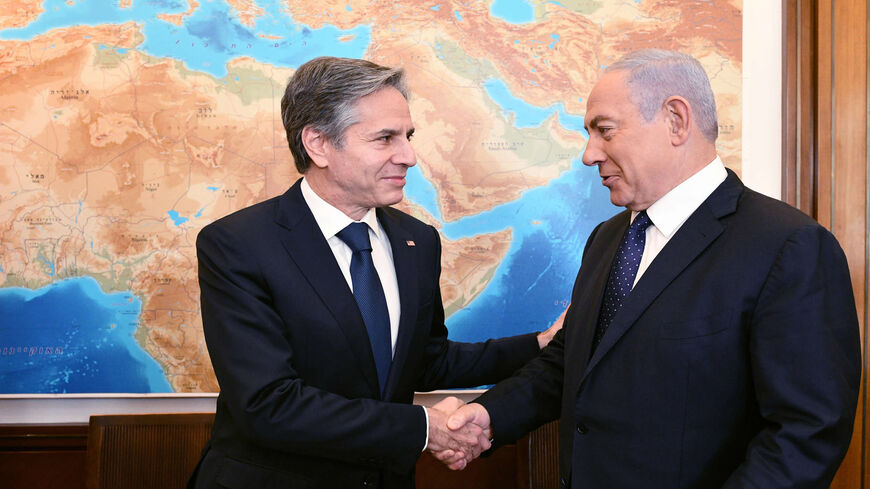 In this handout image provided by the Israeli Government Press Office, US Secretary of State Antony Blinken meets Israeli Prime Minister Benjamin Netanyahu on the first leg of his four-day trip to the Middle East, Jerusalem, May 25, 2021. - Haim Zach/GPO via Getty Images

Reports this morning say Israel has conditioned the rebuilding of the Gaza Strip on advancing the issue of bringing back its citizens and bodies of soldiers held by Hamas. Avraham Avera Mengistu crossed the northern section of the fence separating Israel and Gaza and headed toward the Gaza shore in 2014. Hisham al-Sayed entered Gaza in 2015 through an opening in the fence in the east. They haven't been seen since. Israel believes that Mengistu and Sayed, who reportedly suffer from mental health issues, are held by Hamas. The Islamist movement also holds the bodies of soldiers Hadar Goldin and Oron Shaul, who were killed in the 2014 Gaza war.

Over the years, the families of the captives and of the missing soldiers, as well as many Israeli public figures, have campaigned for their return, objecting to the easing of restrictions in Gaza until Hamas complies to their demand. Several attempts at reaching a prisoner exchange deal with Hamas have failed.

Reportedly, senior Egyptian officials held meetings in recent days with officials in Israel, Ramallah, and the Gaza Strip to prepare the Cairo initiative. If all parties agree and the meeting takes place, it will be conducted in separate rooms, with an Egyptian mediator shuttling between the delegations to exchange messages.

Reports on the upcoming invitation for indirect talks came after the visit of US Secretary of State Antony Blinken to the region, during which he met with Prime Minister Benjamin Netanyahu, Palestinian President Mahmoud Abbas, Egyptian President Abdel Fattah al-Sisi and Jordanian King Abdullah II.

Israel’s public broadcaster Kan reported May 26 that Israel intends to accept Egypt’s invitation for indirect talks in Cairo next week with Palestinian leaders. Still, Israel issued no official reaction on the issue. According to Israel’s Ynet, Foreign Minister Gabi Ashkenazi is set to fly to Cairo already on May 30, at the invitation of his Egyptian counterpart, Sameh Shoukry, to discuss parameters for a long-term cease-fire, the reconstruction of Gaza and finding a solution to the issue of the captives and missing soldiers. The two ministers spoke on the phone last week, shortly after the agreement on the short-term cease-fire. This will be Ashkenazi's first official visit to Cairo and the first official visit of an Israeli foreign minister to Egypt in many years.

It seems that Ashkenazi's visit will serve as preparation for the quadruplet meeting later in the week. Another Egyptian delegation might arrive to Israel in the coming days to advance the initiative. If the initiative takes place, national security adviser Meir Ben-Shabbat is likely to head the Israeli delegation for the indirect talks. Representatives of the Foreign and Defense ministries will also be part of the delegation.

Reports say that Cairo aims to make the Rafah border crossing the main gateway into the Gaza Strip for the reconstruction initiative, as opposed to the Erez crossing at the Israeli border. On May 25, Israel opened the Kerem Shalom and Erez crossing points with Gaza for humanitarian aid, including medical aid and fuel, and for foreign journalists to enter the Gaza Strip. Both crossing points were closed by Israel when the Gaza escalation started.