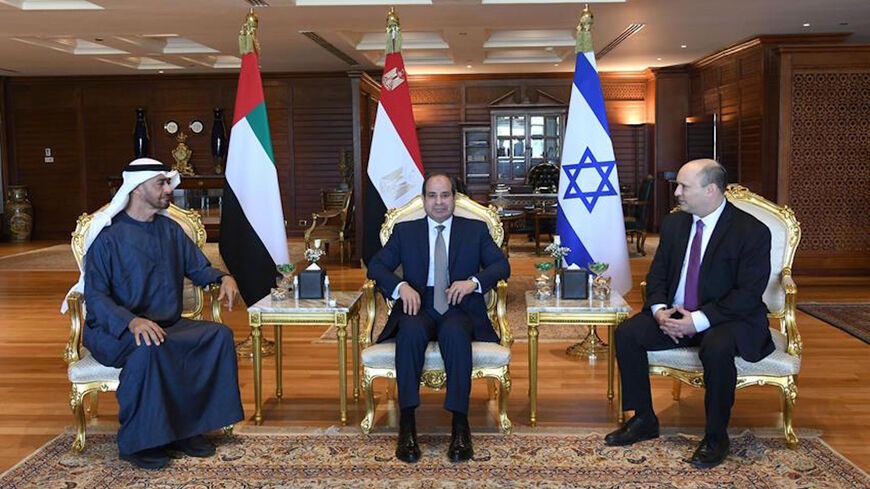 Bennett surprised the Israeli public March 5 when he showed up in Moscow in a bid to mediate between Russian President Vladimir Putin and Ukraine’s President Volodymyr Zelenskyy. Bennett also skipped publicity when he came to the Egyptian Red Sea resort town of Sharm el-Sheikh to meet with Sisi and bin Zayed, once again to discuss mediation among other topics. Bennett arrived in the Sinai Peninsula yesterday for bilateral meetings before the trilateral meeting today.

According to the Egyptian president’s office, the three leaders discussed “global developments” — an apparent reference to the war in Ukraine — and their effects on energy, market stability and food security as well as several other regional and international issues.

The Emirati News Agency said that the leaders discussed strengthening relations between the countries and the importance of cooperation and dialogue to achieving growth and stability in the region.

Bennett’s office also told the Israeli press that the leaders discussed strengthening ties between the three countries and regional issues. An unnamed Israeli diplomatic source told Israel’s public broadcaster KAN that in addition to the Iranian issue and the emerging nuclear agreement, Bennett also spoke of the situation in Ukraine and his efforts to mediate between the parties.

The meeting's agenda was dominated by three topics. The first was the Iranian nuclear threat and the impending deal between world powers and Tehran that could be signed in Vienna any day. Another was Sunni Muslim capitals' fury at US President Joe Biden for what one regional diplomatic source called “abandoning all US assets” in the region. While the Saudis were not physically present in Sharm el-Sheikh, their views were well represented, with their anger and fear over the imminent deal with Iran echoing Israel’s.

The leaders’ sense of urgency was somewhat eased the evening before they met when State Department spokesperson Ned Price said that despite the recent progress between Iran and world powers, “An agreement is neither imminent nor is it certain," and "We are preparing equally for scenarios with and without a mutual return to full implementation” of the 2015 agreement, contradicting Israeli intelligence assessments that a new agreement with Iran is a done deal.

A top Israeli diplomatic source told Al-Monitor last week on condition of anonymity that he could see “an almost religious urge on the American side to ink the agreement at any cost,” a zeal that is binding together Middle Eastern nations disappointed with their American ally for divesting itself of its regional assets as it plans its exit from the region. Bennett has been trying to establish a NATO-style regional alliance as a counterweight to not just Iran’s nuclear program but also the unrest it is fomenting in the region as it seeks to export the Islamic revolution as well as its state-sponsored terrorism and growing use of weaponized drones.

This week, Israel lifted a gag order on the news that the two Iranian drones shot down over Iraq last month by American fighter jets had been set to explode in Israeli territory. One day later, the bombing of hundreds of Iranian drones at a secret hangar near the town of Kermanshah was attributed to Israel. While Israel did not claim responsibility for the attack, the decision to destroy Iran’s UAV fleet appears to have been prompted by the use of weaponized drones against Israel, a red line.

These developments reflect a dramatic change in Israel’s Iran policy, with Bennett shifting Israel’s posture from defense to offense and targeting facilities in Iran. At the same time, Bennett is orchestrating a massive military buildup and consolidating a regional alliance that includes Israeli supplies of air defenses, interception systems, various attack weapons and, of course, intelligence. The alliance could also see sophisticated radar systems on the soil of Arab Sunni states to improve its allies’ deterrence against missile and drone attacks from within Iran.

Recent reports that the United States will agree to remove the Revolutionary Guards from its list of terrorist organizations as part of the deal have caused tremendous anger in many Middle Eastern capitals, especially in Saudi Arabia and the Emirates. On March 19, Bennett and Foreign Minister Yair Lapid issued a joint statement of harsh protest, saying, "We refuse to believe that the United States would remove its designation as a terrorist organization."

Several hours later, Defense Minister Benny Gantz issued a somewhat contradictory statement, reporting on a telephone conversation with his US counterpart Defense Secretary Lloyd Austin in which he thanked him for US military aid to Israel. The aid has been upgraded this year with a billion-dollars' worth of Iron Dome interceptors to replenish Israeli stocks eroded by the May 2021 war with Gaza.

While Gantz did not completely agree with the tone of the Bennett-Lapid statement, it has not led to a political crisis. The Israeli government is trying to play both sides as it contends with the Iran agreement. Bennett and Lapid protest while Gantz concentrates on the day after and Israel's vital security and defense ties with the United States.

At the same time, Bennett is trying to mitigate some of the Saudi and Emirati anger at Washington. Enamored of his international mediator role, he has been relaying messages between his interlocutors in the region and Washington. Israel has accepted that an agreement with Iran is all but signed. The question is​ how much more risk Israel will take in the ongoing war against Iran.