Bennett commits to partnership with Emirates on UAE visit

On his historic visit to Abu Dhabi, Prime Minister Naftali Bennett reassured his hosts that his government is committed to the alliance with the Emirates and that it will lobby on their behalf in Washington. 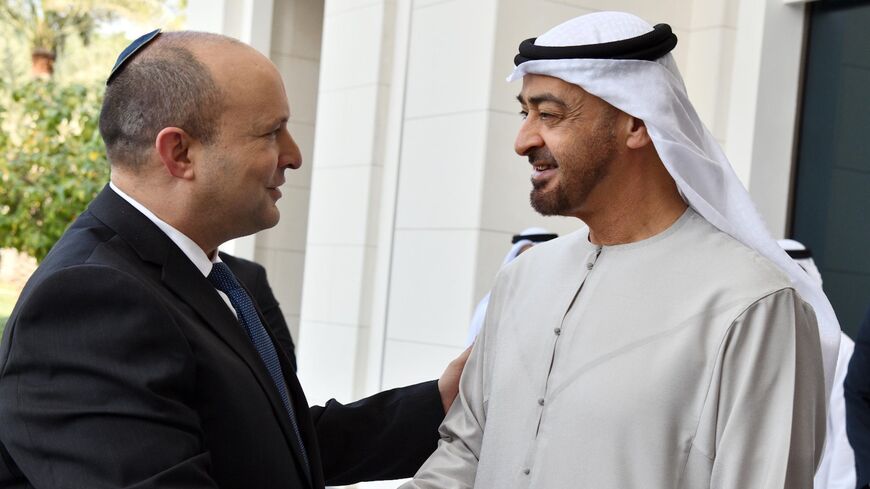 The landmark Dec. 13 visit by Israeli Prime Minister Naftali Bennett to the United Arab Emirates was a clear success. Emirati Crown Prince Mohammed bin Zayed Al Nahyan offered his Israeli guest a hearty and respectful welcome and the two spent significant time together, most of it one-on-one.

There was, however, an elephant in the room. Bennett’s visit followed a week of meetings in Tehran by Emirati national security adviser Sheikh Tahnoun bin Zayed al-Nahyan with Iranian President Ebrahim Raisi and other top Iranian officials.

With the recent rapprochement efforts by the UAE and other Sunni Arab states, the Saudi-led Arab coalition against Iran is fraying. The UAE, a key player, seems to have opened the playing field. A series of commercial and trade agreements between Abu Dhabi and Tehran have made it clear that things have changed.

The UAE is doing some sophisticated maneuvering between Jerusalem, Tehran, Riyadh and Washington. “They are running through the drops without getting wet,” an Israeli source who took part in the visit told Al-Monitor on condition of anonymity. “They are doing so with expertise and skill, and the strangest thing is that no one is mad at them. We know about their relations with the Iranians, who know about their relations with us, and everyone accepts it.”

A senior Israeli political official told Al-Monitor on condition of anonymity that bin Zayed asked Bennett “whether Israel had finally stabilized” following the country's recent political upheaval. Since the September 2020 signing of the Abraham Accords, the Israeli government has changed. The administration in Washington, which was very supportive of the UAE, has changed hands, and the Emiratis feel it's been treating them with suspicion. “They simply wanted to know whether the storm had receded, whether the new government was here to stay and if so, what its policy is on the Abraham Accords.”

The prime minister explained that his government is stable, that the political threats it faces are not serious and emphasized his own and his government’s commitment to the deal with the UAE. Both sides appeared enthusiastic.

When the matter of a free trade zone arose, Bennett summoned the Israeli official in charge of negotiations and asked him in the presence of his host when the deal would be finalized. When the official answered that the target date was August 2022, Bennett asked if the date could be moved up. The official conceded that the sides could complete their talks in March. Bennett repeated his question, and the sides eventually agreed that the free trade deal would be signed at the end of January.

Before they parted, the crown prince accepted Bennett’s invitation to visit Israel.

Both sides were careful not to mention Iran. The Emiratis were said to be highly sensitive to the issue, understandably. “The Gulf is the only thing separating Iran and the Emirates, and it is pretty narrow,” a senior Israeli diplomatic source told Al-Monitor on condition of anonymity. “The Emirates are very vulnerable to a potential drone attack of the type Iran mounted on the Aramco oil installations in Saudi Arabia [in November] as well as to other potential attacks on their busy maritime trade lanes, especially on the part of the Houthis in the Red Sea," said the official, explaining that the Emiratis are trying to maximize ties with all the states and are interested in obtaining security immunity. "Israel understands this policy and is helping it."

In Israeli diplomatic circles, some are calling the UAE the “Switzerland of the Middle East.” The kingdom’s declared neutrality includes top-level contacts with Turkey, Iran and Syria as well as with Israel, Saudi Arabia and other states from the opposing camp. The Emirates, a small country dependent on maritime trade, want to be on good terms with all sides. Nonetheless, according to the Israeli political official, the hosts “underscored their commitment to the agreements with Israel and their desire to deepen ties, strengthen them and continue developing them.”

Israel is committed to all the agreements and wants to get to work on them, Bennett reportedly told bin Zayed. The ties between us are a tremendous power multiplier. There was discussion of joint infrastructure projects and cooperation on security matters as well as a joint fund that could make Israel and the UAE global leaders on renewable energy.

Sensitive issues arose as well. Bennett landed in the Emirates on the day The Washington Post reported that last June, Israel had carried out three attacks in Syria that destroyed Syrian President Bashar al-Assad's efforts to rebuild his country’s chemical warfare industry. “Strikes deep within Syria are a hint to Iran,” a senior Israeli military source told Al-Monitor on condition of anonymity. "Especially regarding the Israeli air force’s capability to reach distant, deep-secret targets.”

Bin Zayed and his people also explored how Israel could help them in Washington, as the Emiratis know that closer ties with Israel could help them make inroads with the new administration. Bennett explained Israel’s policy on the world powers’ talks with Iran and on Iran’s activity in the Middle East and promised to lobby the United States to lift its freeze on the sale of F-35 stealth fighter jets to the UAE.

Bennett was surely satisfied. While his political nemesis, former Prime Minister Benjamin Netanyahu, was trying to get the state to continue paying for his family’s security detail, Bennett had made history in the Gulf.