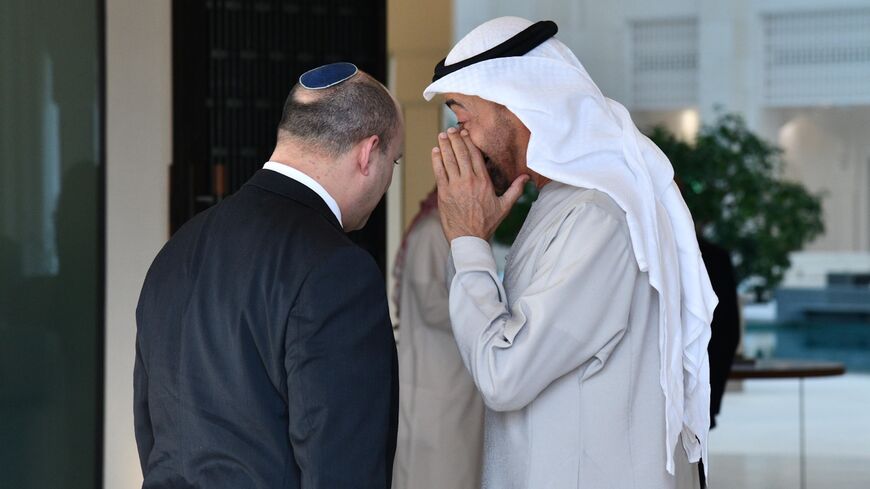 Prime Minister Naftali Bennett met today in Abu Dhabi with Emirati Crown Prince Sheikh Mohammed bin Zayed Al Nahyan. It was the first-ever official meeting between leaders of the two countries. The meeting, which took place at the royal palace, lasted four hours, of which two and a half hours were one on one.

Before embarking on his trip Bennett stated, “The potential inherent in the partnership between Israel and the Emirates is enormous. Together, we have a real opportunity to create a stable, prosperous and stronger Middle East. And this is just the beginning.”

Bennett arrived to Abu Dhabi Sunday evening and was greeted at the airport by Emirati Foreign Minister Sheikh Abdullah bin Zayed bin Sultan Al Nahyan. They held a short meeting, discussing the importance of tolerance and of religious moderation. According to his office, Bennett told the emir, “I appreciate your warm hospitality. This is a wonderful reception. I am very excited to be here on the first official visit by an Israeli leader here. We expect to strengthen the relationship between the countries.”

Reports said the meeting focused on the Iranian threat and the two leaders also advanced a series of economic steps to deepen trade and commercial ties between Israel and the Emirates. The leaders expressed interest in establishing bilateral and regional cooperation in fields of investment, economy, trade, smart agriculture, nutrition solutions, renewable energies, high-tech and health. The leaders reportedly also discussed the importance of Dubai Expo 2020 (which took place this October) in advancing cooperation in the region.

Speaking to the Saudi news outlet WAM before the meeting, Bennett said the Abraham Accords on normalizing ties between Israel, Bahrain, the Emirates, Morocco and Sudan established a "new, deep and solid structure for diplomatic, economic and cultural relations" based on cooperation in the Middle East.

"The relations between the two countries have strengthened in all fields and I am very satisfied with that, as many cooperation agreements were concluded in the fields of trade, research and development, cyber security, health, education, aviation and more, and I look forward to continued development and consolidation of relations. Our cooperation provides unprecedented economic opportunities not only for us, but for more countries, which is another element for enhancing stability and prosperity in this region," Bennett added.

He went on, “The message that I wish to deliver to the United Arab Emirates’ leaders and Emirati citizens is that mutual partnership and friendship are natural. We are neighbors and cousins. We are the grandchildren of Prophet Abraham. The period since the signing of the Abraham Peace Accords is the best evidence.”

The Israeli prime minister called bilateral relations between Israel and the Emirates “a precious treasure for us and the entire region.”

The Emirati leader told the press he hoped the meeting with Bennett would "advance the relationship of cooperation toward more positive steps in the interests of the people of the two nations and of the region."

The meeting came on the backdrop of the Vienna talks on Iran and recent contacts between the Emirates and Iran. The Emirati and Iranian foreign ministers spoke on the phone Nov. 12. Emirati national security adviser Sheikh Tahnoun bin Zayed al-Nahyan arrived on a rare visit to Tehran on Dec. 6 and met with President Ebrahim Raisi.

Head of the Knesset Defense and Foreign Affairs Committee Ram Ben Barak called the visit of Bennett “a very significant event," tweeting this morning, "It’s a new stage in strengthening bilateral relations. Clearly, cooperation with the Emirates will reflect widely on the region in the domain of security as well.”

Former Prime Minister Benjamin Netanyahu, who signed the Abraham Accords last year, had tried repeatedly to visit the Emirates, but was forced to cancel each time for different reasons.

Foreign Minister Yair Lapid visited the Emirates last June and inaugurated Israel’s embassy there. Since then, several ministers have visited the country.