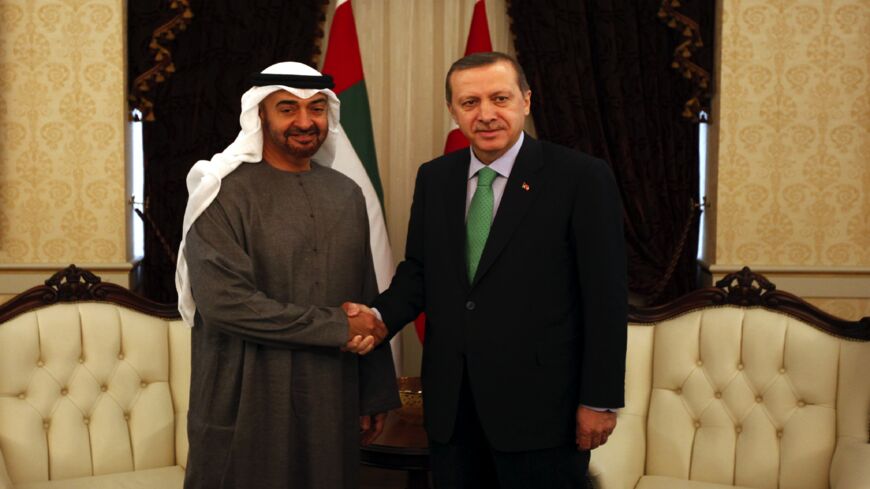 A statement released by the Turkish Presidency on Tuesday said that relations "between the countries and regional issues were discussed in the talks.”

The UAE’s state news agency, WAM, said the leaders talked about the prospects of reinforcing relations between the two countries “in a way that serves their common interests and their two peoples.”

Well-placed sources speaking on the condition of anonymity confirmed Barzani has been working to soothe tensions between Erdogan and the crown prince, commonly referred to by his initials, MBZ, “for some time.” A detente between Turkey and the UAE “serves regional peace and stability,” one of the sources said. The sources did not elaborate. In any case, the mediation effort clearly enhances Barzani’s role on the regional diplomatic stage and helps the Iraqi Kurds chalk up brownie points with two critical regional players.

Clever and personable, Barzani enjoys cordial ties with both leaders but is known to have a special rapport with Erdogan. These ties with Turkey were greased by a mega oil deal signed in 2010 that allowed Iraqi Kurdistan to export its oil via Turkey and independently of Baghdad to Western markets. Turkey is a vital economic lifeline for the Kurdistan Regional Government (KRG). The KRG, in turn, serves as a staging ground for Turkey’s constantly expanding military operations against rebels of the outlawed Kurdistan Workers Party.

On June 12, Barzani traveled to Abu Dhabi at the invitation of the crown prince. The Barzanis and the UAE royals, who have poured millions toward the upkeep of refugees in Iraqi Kurdistan, have gotten on well for decades.

Barzani wrote on Twitter of his meeting with MBZ: “We discussed further strengthening bilateral ties and cooperation, regional peace and other issues of mutual interest.” One of those issues was Turkey. A day later, fugitive organized crime boss Sedat Peker, who has been sheltering in the UAE, was hauled off by local police for “a chat.” Till then, Peker had been posting a series of tell-all videos on YouTube, making accusations against Erdogan’s interior minister and other prominent individuals close to the president. The allegations of murder, cocaine trafficking, extortion and rape prompted feverish and ill-founded speculation of the Erdogan government’s imminent demise.

The videos stopped. Peker offered a bizarre explanation. UAE officials had warned him, he said, of an imminent attempt on his life. Posting the videos heightened the risk. Yet Peker has continued to make his sensational claims via Twitter instead, limiting his audience and impact. The sources denied there was any link between Barzani’s visit and the police raid.

Turkey and the UAE have been at loggerheads primarily over Ankara’s now-waning support for the UAE’s Muslim Brotherhood foes. The two countries are on opposing sides of Libya’s internal conflict, which saw the Turkish-backed former Government of National Accord fend off UAE-backed eastern warlord Khalifa Hifter. The UAE also threw its support behind Cyprus, Greece and Egypt in their row with Turkey over exploration rights in the Eastern Mediterranean. The Horn of Africa is another area where Turkey and the UAE compete. Media outlets of both countries have meanwhile been trading wild accusations against the other, among them claims the UAE helped stage the failed 2016 coup to topple Erdogan. An early test of reconciliation is whether this stops.

But it's far more than Ankara’s eagerness to silence Peker — his extradition from the UAE was reportedly among the topics covered by Erdogan and the crown prince — that is driving rapprochement. Ankara’s outreach mirrors its broader effort to patch up ties with Israel, Saudi Arabia and Egypt, and to nip its growing regional isolation in the bud. With former President Donald Trump and his son-in-law, Jared Kushner — who helped push through the Abraham Accords — gone, the UAE has also shed some of its braggadocio and faces growing economic differences with Saudi Arabia. Both Turkey and the UAE share complex relations with Iran.

Jalel Harchaoui, a senior fellow at the Geneva-based Global Initiative Against Transnational Organized Crime, noted the dialogue does not represent “a drastic U-turn.”

“In fact, the cooling-off process has already happened over the last 12 to 18 months,” he told Al-Monitor. “The Donald Trump presidency was essentially a four-year window of permissiveness and laissez-faire during which both ambitious powers had the chance to try out coercive experiments and military adventures. The UAE-led blockade against Qatar [Doha is militarily supported by Turkey] is a good example," Harchaoui noted. Turkish belligerence in the Eastern Mediterranean is another.

The ushering in of the Biden administration and its averred determination to prioritize China, climate change and domestic issues, has prompted a reassessment by regional powers. Resuming dialogue and cultivating economic ties benefits both financially beleaguered Turkey and the cash-rich UAE. “It is indeed a good idea for Abu Dhabi to invest in Turkey right now because it is cheap and having economic leverage will help Abu Dhabi increase its sway over Turkey in the future,” Harchaoui contended.

Erdogan insisted trade was the main focus of talks with UAE national security adviser Sheikh Tahnoun bin Zayed al-Nahyan on Aug. 18, saying “serious Emirati investments” lay on the horizon. “The UAE, I believe, will start serious investments in our country very soon,” Erdogan said, adding he could soon be meeting with the crown prince. Monday’s phone call is a step in that direction.

The Turkish media and the millions of Turks transfixed by bombshell charges, however, are far more seized by what all of this spells for Peker. In a pinned tweet, the convicted mobster insisted he has residency in the UAE and “under international law, no country can render me from the country I am in.” Past behavior suggests that when they deem fit neither Turkey nor the UAE cares all that much about international law.