Separate agreements in trade, energy and the environment were inked. 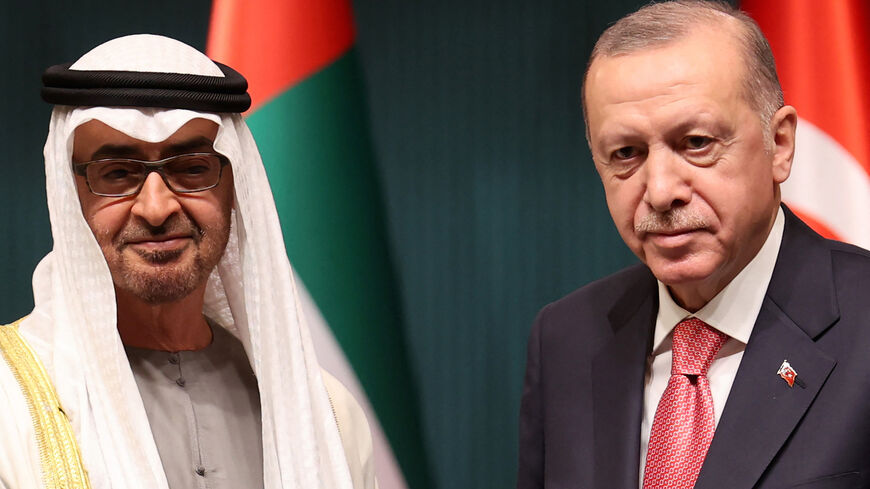 Turkish President Recep Tayyip Erdogan met with Abu Dhabi’s crown prince, Sheikh Mohammed bin Zayed al Nahyan, in Ankara today, formally ending years of hostility that saw Turkey and the Gulf sheikhdom on the opposite sides of major conflicts in the Middle East, the Horn of Africa, and in the media. The pair were all smiles as they met in Erdogan’s 1,100-room palace in the Turkish capital.

The visit by the crown prince, commonly known by his initials MBZ, was the first since 2012. The cordial tone was set by a series of investment accords under which the UAE will invest up to $10 billion in Turkey’s increasingly shaky economy.

Separate agreements in trade, energy and the environment were also inked alongside a deal between the Abu Dhabi Securities Exchange and Turkey’ stock exchange, Borsa Istanbul.

Until recently, Turkey and the UAE were in near open conflict in Libya, where Turkish forces and Sunni Syrian mercenaries backed the former Government of National Unity against the eastern warlord Khalifa Hifter, who was militarily supported by the UAE. Turkey also accused MBZ of involvement in the bloody coup attempt in 2016 to overthrow Erdogan.

Turkish Foreign Minister Mevlut Cavusoglu announced today that he would be traveling to Abu Dhabi in December, presumably to lay the ground for a return visit by Erdogan. Turkey is also thought to be pressing for the extradition of mobster-turned-whistleblower Sedat Peker, who has been leaking incriminating information about senior government figures after falling out with them. Peker is currently based in the UAE.

In turn, the UAE is reportedly interested in mediating between Turkey and the government of Syrian President Bashar al-Assad. UAE’s foreign minister, Sheikh Abdullah bin Zayed, met with Assad in Damascus on Nov. 9, part of a UAE- and Egyptian-led effort to bring Syria back into the Arab League fold.

Early signs of a thaw emerged when the crown prince’s brother and UAE national security advisor, Tahnoun Bin Zayed al Nayhan, met with Erdogan in Ankara in August. The prevailing view is that the UAE is seeking a rapport with Ankara in part to offset growing economic competition from Saudi Arabia, and more broadly as the Biden administration signals less engagement in the region, leaving countries like Turkey and the UAE to fend for themselves.

Turkey has also been seeking to mend ties with Egypt and Israel in a bid to break out of its growing regional isolation. Last week, Erdogan spoke with Israeli Prime Minister Naftali Bennett for the first time following Ankara’s release of an Israeli couple accused of spying. He also spoke to the president of the Jewish state, Isaac Herzog. Both Egypt and Israel are demanding that Turkey scale back its support for Hamas and the Muslim Brotherhood, a concern that the UAE shares.

With the Turkish lira at record lows against the US dollar, Turkey offers lucrative opportunities for risk-ready investors. But no amount of outside investment can reverse Erdogan’s authoritarian tendencies and obsession with pulling down interest rates. Erdogan has fired three Central Bank chiefs so far for not agreeing with him. Inflation is now near 20%. Food and utility prices are soaring and Erdogan’s poll numbers are slipping in tandem.

The currency rallied slightly in conjunction with the visit, with an 11% recovery during the day Tuesday following 11 days of decline.

It remains unclear what progress on political issues, if any, was recorded during the Erdogan-MBZ summit. Neither leader made any statements. But the fact that they met at all suggests that both leaders have decided to put past enmities to rest.