How far might Turkey, UAE reach in fence-mending bid?

Turkish President Recep Tayyip Erdogan's reception of the UAE national security adviser has raised the prospect of a reset in acrimonious bilateral ties. 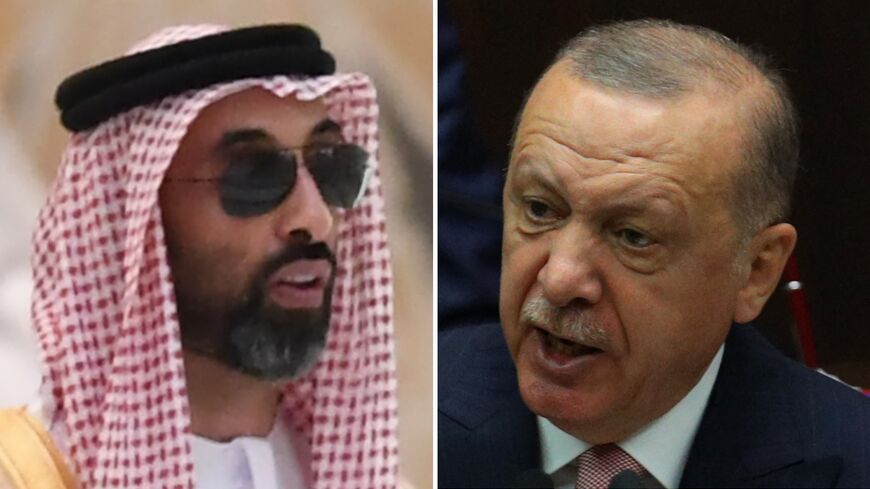 The national security adviser of the United Arab Emirates, Tahnoun bin Zayed al-Nahyan (L), and Turkish President Recep Tayyip Erdogan (R) met Aug. 18 in Ankara, Turkey. Here, the UAE official is seen at a welcoming ceremony for Russian President Vladimir Putin at the Al-Watan presidential palace in the Emirati capital, Abu Dhabi, on Oct. 15, 2019, while Erdogan, who is also the leader of the Justice and Development Party, speaks during a parliamentary group meeting at the Grand National Assembly of Turkey in Ankara on June 30, 2021. - KARIM SAHIB/AFP (L) / Adem ALTAN/AFP (R) / via Getty Images

While President Recep Tayyip Erdogan’s meeting with a senior Emirati official last week was a significant step toward thawing Turkey’s multifaceted feud with the United Arab Emirates and a number of converging interests are pushing the two sides closer, the path to reconciliation remains bumpy and fraught with uncertainty.

As part of efforts to mend fences with Egypt and its Gulf allies, Turkey had already launched tentative contacts on an intelligence level with the UAE. The visit of the Emirati security chief, however, still came as a surprise as the agenda of the talks appeared aimed at a broad reset in bilateral ties, including in economic cooperation.

Speaking on a TV program after the meeting, Erdogan emphasized the prospect of “serious” Emirati investments in Turkey. The discussions involved a road map on investments and the deputy chair of Turkey’s sovereign wealth fund and the head of the presidential investment office took part in the talks, Erdogan said. “The UAE, I believe, will start serious investments in our country very soon,” he said, adding that he could soon meet with Abu Dhabi Crown Prince Mohammed bin Zayed al-Nahyan, the UAE’s de facto ruler.

The fast progress in the dialogue owes to overlapping priorities in light of changing conditions in the region.

Until recently, Turkish officials and the media would depict the UAE as a “diabolical” power confronting Turkey in a vast region, from Syria, Libya and the eastern Mediterranean to Sudan, Somalia and the Red Sea. Much of the vitriol targeted the Abu Dhabi crown prince. He was accused of backing the Gulenist movement, which Ankara blames for the 2016 coup attempt and has backlisted as the "Fethullah Gulen Terror Organization," financing the failed coup itself, backing Egyptian leader Abdel Fattah al-Sisi after the latter’s overthrow of the Muslim Brotherhood, waging a proxy war on Turkey in Libya via Khalifa Hifter’s forces and inciting the Saudi crown prince against Turkey. Government-controlled media called Mohammed bin Zayed al-Nahyan “the prince of darkness” and claimed he used exiled Palestinian politician Mohammed Dahlan to advance his designs against Turkey.

The main factor that brought Turkey and the UAE to loggerheads was the Muslim Brotherhood’s rise after the Arab Spring. The UAE adopted a hard-line policy against the movement, which Erdogan’s government has backed in Egypt and elsewhere. Turkey’s establishment of a military base in Qatar further antagonized the Emirates and Saudi Arabia as they led a regional blockade on Qatar in 2017.

Bilateral tensions escalated later that year after the Emirati foreign minister retweeted a post that said Fahreddin Pasha, the Ottoman governor of Medina in the dying years of the empire, stole money and manuscripts from the holy city. “These are Erdogan’s ancestors and their history with Arab Muslims,” the tweet said. Erdogan hit back in kind and the Ankara street where the Emirati Embassy is located was renamed after the Ottoman officer, whom Turks revere for defending Medina against British forces during World War I.

The conflict in Libya only added to the tensions. According to Ankara, Emirati warplanes were behind a deadly strike on al-Watiya air base in July 2020.

Later that year, Erdogan was so infuriated with the UAE’s establishment of diplomatic ties with Israel that he threatened to sever relations with the Emirates (despite Turkey having established ties with Israel in 1949, the first majority Muslim country to do so).

Now, the UAE is changing its approach to Turkey as well. Anwar Gargash, a diplomatic adviser to the UAE ruler, hailed the meeting in Ankara as a “historical and positive meeting” that focused on cooperation and economic partnership. In 2017, Gargash, who was state minister for foreign affairs at the time, had warned against growing Turkish and Iranian influence, “The Arab world will not be led by Tehran or Ankara. The geostrategic competition taking place in the region calls for strengthened Arab [unity] with Riyadh and Cairo as its pillar.”

The mutual change of heart is driven by multiple factors on various fronts.

For Ankara, the UAE has until now been the most unpredictable link in its quest for normalization with the Egyptian-Saudi-Emirati axis. Ankara was hoping that its Qatari allies would help it lay the ground for rapprochement with Riyadh and Abu Dhabi following Doha’s own reconciliation with its neighbors. The fence-mending took on urgency earlier this year after Turkish mobster Sedat Peker took refuge in Dubai and began posting viral videos, raining grave allegations of corruption on Turkish government ranks. The first tangible outcome of the Turkish-Emirati intelligence contacts came June 13 when the Emirati authorities held Peker for 10 hours and told him to stop posting videos, according to the mobster’s own account.

Turkey’s desperate need to attract foreign funds to ease its hard-currency crunch is also a driver behind its drastic change of attitude vis-a-vis the Gulf. The problem has become so pressing that Erdogan had to urge Libya’s interim prime minister to repay $3.8 billion in debt to Turkish contractors in August.

Yet the abrupt Emirati softening without waiting for the outcome of the Cairo-Ankara normalization bid speaks of the UAE’s own needs for reconciliation, which, along with Ankara’s strains, are dictating a trade-for-security balance between the two countries.

The main factors motivating the two sides could be summarized as follows:

As for economic incentives, the seaport sector offers a potential for cooperation as both sides have been very enthusiastic in this field in recent years. On the issue of investments, however, officials have yet to share detailed information.

Turkey, simply put, needs cash and investment, which the UAE can offer.

The progress of the dialogue will depend on how close the two sides can come on their main problems. Turkey expects the UAE to prevent "Fethullah Gulen Terror Organization" members from using Emirati airports and to arrest and extradite those wanted, end its involvement in the Kurdish dossier and stop aligning with Greece and the Greek Cypriots in the eastern Mediterranean. Ankara also reportedly expects Peker, who has continued to tweet despite stopping posting videos, to be silenced or extradited.

The UAE’s priority is to thwart the Muslim Brotherhood project in the region; it expects Ankara to cut support for the movement, hand over wanted Brotherhood members taking refuge in Turkey and abandon what it considers its interventionist and expansionist policies in the region. If Emirati investments do help to alleviate Erdogan’s economic woes, Ankara could find itself under growing pressure to change its regional policies. Still, finding a middle way will not be easy for the two countries.