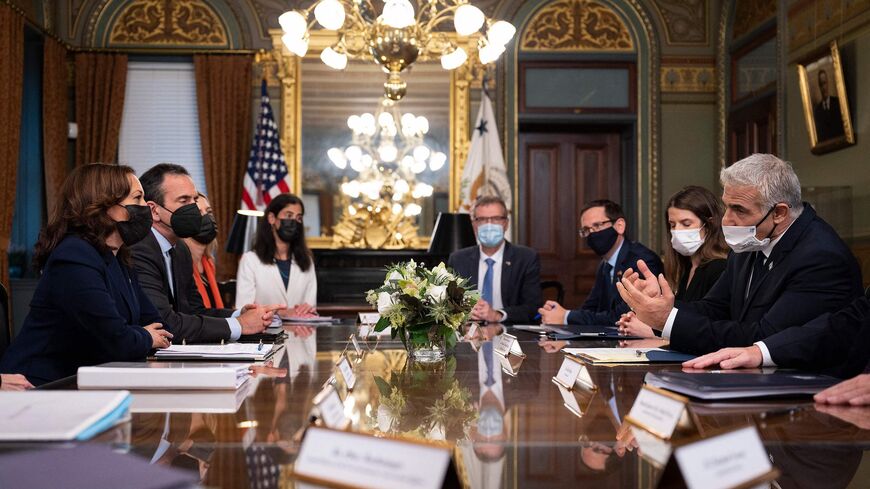 An unnamed State Department official said this morning that the United States is working to expand the Abraham Accords normalizing relations between Israel and Arab nations. Briefing journalists ahead of the expected meeting today between Foreign Minister Yair Lapid and Secretary of State Antony Blinken, the official said, "We continue to welcome the economic cooperation between Israel and all countries in the region. We hope that normalization can be leveraged to advance progress on the Israeli-Palestinian tracks."

Lapid is meeting Blinken now for a trilateral meeting with Emirati Foreign Minister Abdullah bin Zayed Al Nahyan. The three ministers will also dine together at Blinken’s invitation. Before leaving tomorrow, Lapid is scheduled to meet with the leadership of the pro-Israel lobbying group AIPAC. Yesterday, Lapid met with US national security adviser Jake Sullivan, Speaker of the House Nancy Pelosi and Vice President Kamala Harris.

Lapid’s three-day trip to Washington takes place on the backdrop of growing concerns in Jerusalem over Washington resuming talks with Tehran for a return to the nuclear accord. Lapid had said before leaving for the United States that he intends to focus on three topics: Iran's nuclear program, expanding the Abraham Accords and healing US ties to Israel. Yesterday he tweeted, "The center of my visit is the Iranian nuclear issue, but it also deals with one other thing: strengthening the bipartisan connection with the next generation of young Americans. This generation is engaged not only in wars and conflicts, but also in the climate crisis, the global immigration crisis and questions of identity."

In his meeting with Sullivan, Lapid argued that Iran is edging closer to becoming a nuclear threat. "We discussed a number of security issues, namely the Iranian threat. I shared with him Israel’s concern about Iran’s race toward nuclear capability and that is Iran is becoming a nuclear threshold state. We discussed the need for an alternative plan to the nuclear agreement. We also discussed my plan for the Gaza Strip — “economy for security” — and ways to strengthen the alliance between the US and Israel," he tweeted. On Oct. 5, Israel’s national security adviser Eyal Hulata met with Sullivan at the White House in the framework of the US-Israel Strategic Consultative Group. The meeting revealed that the gap between the Israeli and American positions on talks with Iran is still quite wide.

Lapid told Harris, "I am happy to be here with one of the best friends Israel has in Washington. We can always count on you in a difficult moment. This friendship is based on shared values. Democracy, liberty, human rights and respect for those different from you, wherever they come from."

At a meeting at George Mason University Sept. 29, Harris nodded while a student accused Israel of genocide against the Palestinians. Her office later clarified that Harris firmly rejects the student's position. At their meeting yesterday, Harris did not refer to the Palestinian issue or Palestinian statehood. Lapid did mention the topic, saying, "We all believe as you said that the Palestinians are entitled to have a quality of life, an economy and education and hope."