Israeli official sources said yesterday the centerpiece of President Joe Biden’s visit to Israel would be an unprecedented Jerusalem Declaration, outlining the strategic partnership between the two countries. 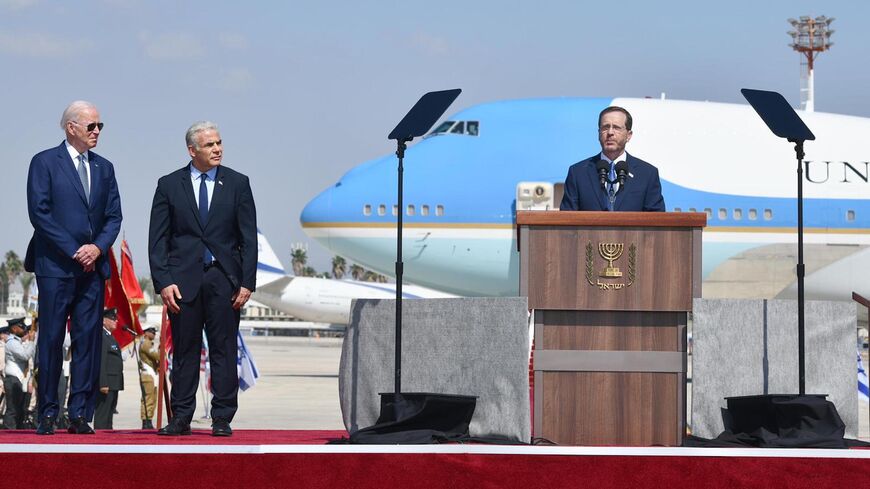 US President Joe Biden landed at Israel’s Ben Gurion airport this morning. He will spend two days in Jerusalem for talks with Israeli leaders before meeting Palestinian President Mahmoud Abbas on Friday in Bethlehem. After his meeting with Abbas, Biden will return to Israel and then fly to Saudi Arabia. His arrival today marks Biden’s 10th visit to Israel, but his first as president.

Shortly before he landed, the White House and the Israeli government said in a joint statement, “Today, the President of the United States and the Prime Minister of the State of Israel reaffirm their commitment to elevating the strategic partnership between the countries to new heights by launching the new Strategic High-Level Dialogue on Technology, tasked with establishing a US-Israel technological partnership on critical and emerging technologies and solutions to global challenges.”

As announced beforehand, the president did not shake hands with the dignitaries that awaited him by the tarmac. The welcoming ceremony was kept short with only a few dozen guests due to the tight schedule, coronavirus concerns and the hot weather.

Israel’s President Isaac Herzog greeted Biden with, “The people of Israel welcome you to the Holy Land with open arms and joyous hearts.” He added, “Mr. President, you have been a true friend and staunch supporter of Israel and the Jewish people, of our security and wellbeing, your entire life. … This trip, Mr. President, is your journey of peace from Israel to Saudi Arabia, from the Holy Land to the Hejaz.”

Speaking right after him, Prime Minister Yair Lapid said that Biden’s visit is both historic and deeply personal: “It is historic because it expresses the unbreakable bond between our countries. Our commitment to shared values: democracy, freedom and the right of the Jewish people to a state of their own. And it is a very personal visit, because your relationship with Israel has always been personal. You once defined yourself as a Zionist. You said that you don’t have to be a Jew in order to be a Zionist. You were right, and in your case, a great Zionist and one of the best friends Israel has ever known.”

He added, “You have not been here for a few years, so in the next couple of days, you will see how Israel has grown and developed. You will see the strength and smartness of the Israeli army, the creativity of the start-up nation, the diversity of the Israeli society.”

Lapid said that during the visit, he will discuss with Biden matters of national security, including “building a new security and economy architecture with the nations of the Middle East, following the Abraham Accords and the achievements of the Negev Summit. And we will discuss the need to renew a strong global coalition that will stop the Iranian nuclear program.”

Following the brief ceremony at the airport, Biden is now scheduled to get a tour of Israel’s anti-missile security systems, including the US-financed Iron Dome aerial defense system and the Iron Beam laser defense system still in development. Defense Minister Benny Gantz will accompany Biden on the tour, during which the president is expected to announce his approval for US defense officials and contractors to begin talks with Israeli counterparts on purchasing the Iron Beam system.

Tomorrow, Bien is set to meet privately with Lapid at the Jerusalem Waldorf Astoria hotel, where there will also be working session between the two delegations, followed by a press conference for the two leaders. Biden and Lapid will also hold a four-way virtual summit dubbed I2U2, with Indian President Narendra Modi and Emirati leader Mohamed bin Zayed Al-Nahyan. Ahead of the summit, the White House indicated that Biden will raise the issue of food security in the wake of the Russian invasion of Ukraine. The Indian Foreign Ministry said that the I2U2 leaders will deliberate on economic partnerships and other areas of mutual interest.

Yesterday, a senior Israeli official unveiled the first details of the Jerusalem Declaration set to be signed tomorrow. The official told reporters on condition of anonymity Tuesday that the declaration would be a centerpiece of Biden’s visit. The document, it was noted, will be "a platform for cooperation in the coming years" as well as “a living testimony to the unique quality, depth and scope of the US-Israel relationship,” as it will “expresses the warmth and profound commitment to the relationship on both sides, specifically [the US commitment] to Israel’s security, prosperity and well-being.”

The document reportedly includes a joint stance against Iranian nuclearization and a commitment to "use all elements of national power" to prevent it.

The senior Israeli official also said that there would soon be an announcement regarding the “immediate materialization” of a normalization process between Israel and Saudi Arabia. Recent reports have suggested Biden will announce in Riyadh an agreement between Saudi Arabia, Israel and Egypt for the Saudis to gain control over two islands in the Straits of Tiran. Essentially, Israel would agree to changes in the security arrangements in its peace treaty with Egypt to allow an international military force to be stationed on those islands. Still, other reports said it is unclear whether an agreement could be concluded in time for Biden’s arrival to Riyadh.