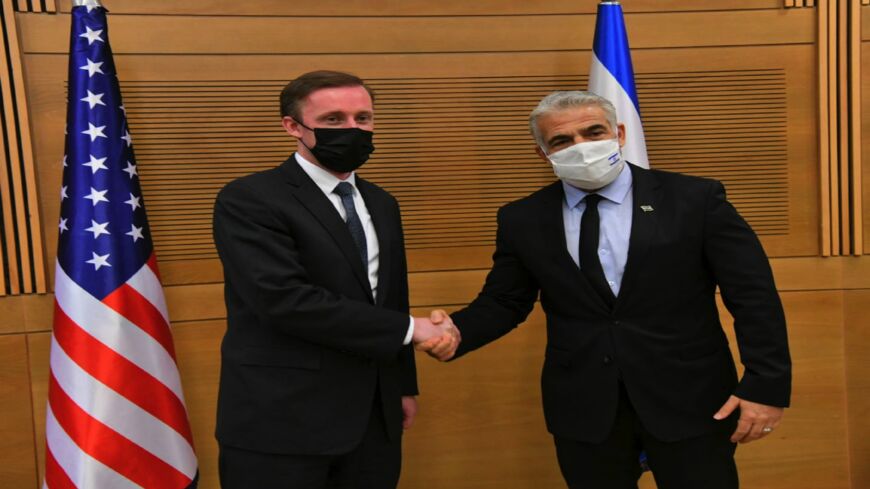 Prime Minister Naftali Bennett met today in Jerusalem with US national security adviser Jake Sullivan and other senior US officials on a three-day visit to the region. Addressing the press ahead of the beginning of the encounter, Bennett said, “These days are pretty important. What happens in Vienna has profound ramifications for the stability of the Middle East and the security of Israel for the upcoming years. And that’s why it’s such a timely meeting.”

The meeting between Bennett and Sullivan took place on the backdrop of publications claiming that President Joe Biden has been ignoring requests by the Israeli premier for a phone call. Publications argued that tensions have grown lately between Washington and Jerusalem over the issue of West Bank settlements and also over divergences on the Vienna talks. According to some Israeli sources, the White House is adamant to reach a new agreement with Iran and is less inclined to follow pressure from Jerusalem to reinstate and increase sanctions against Tehran.

Appearing to downplay these rumors about a crisis between Washington and Jerusalem, Bennett noted, “I want to say that the relationship between my government and the Biden administration, between Israel and the United States, is as strong as ever. And being so strong and having this meaningful friendship means that we can also talk openly and candidly about all the shared challenges that we’re facing. And that’s what we’re going to do.”

Sullivan said before the meeting that Biden sent him to Israel to coordinate and cooperate US and Israeli approaches to Iran and other security issues, stating that “at a critical juncture for both of our countries on a major set of security issues, it’s important that we sit together and develop a common strategy, a common outlook, and find a way forward that fundamentally secures your country’s interests and mine. And we believe those interests, like the values upon which our countries are built, are deeply shared and deeply felt.”

Sullivan arrived in Israel yesterday evening for a visit largely focused on the Iranian nuclear program and the Vienna talks. Shortly after his arrival, he met with President Isaac Herzog. According to a statement issued by his office, the president expressed in his meeting with Sullivan “concern with Iran’s progress toward nuclear weapons under the cover of the negotiations in Vienna.”

After their meeting, Lapid tweeted, “We discussed the strategy for the struggle against the Iranian nuclear program and the way in which the United States and Israel cooperate on the issue, the geopolitical challenges and opportunities in the Middle East and other regions.”

Gantz noted after the meeting with Sullivan and other senior US officials that they “discussed strategic challenges and areas of cooperation, with an emphasis on facing the Iranian nuclear threat and regional aggression. I thanked the adviser for his commitment and personal contribution to US-Israel ties and to Israel’s security and emphasized the importance of deepening our collaboration in all areas.”

Gantz further added, "I also updated the adviser about confidence-building measures that the defense establishment is undertaking with the Palestinian Authority as well as counterterrorism and other security missions in Judea and Samaria (West Bank)."

Addressing again the issue of Iran, Herzog said today the Iranian nuclear threat must be "neutralized once and for all" whether as part of a nuclear agreement or through other means.