Netanyahu met in Jerusalem with US national security adviser Jake Sullivan, in a bid to coordinate positions on Iran and prepare for a trip by Secretary of State Antony Blinken. 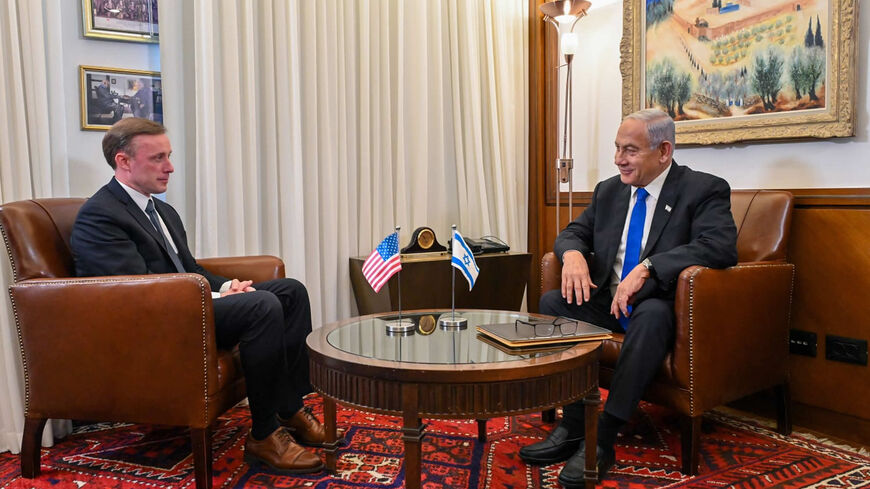 For the first time since taking office, Prime Minister Benjamin Netanyahu met on Thursday in Jerusalem with US national security adviser Jake Sullivan.

The Biden administration top official traveled on Wednesday to Israel, and held meetings with Israel’s President Isaac Herzog upon his arrival. Herzog lauded Sullivan as a "great friend in Israel."

"The US is Israel's closest and most important ally, and he [Sullivan] comes at the right time, as we meet so many challenges together," he said.

The Sullivan-Netanyahu agenda started with a larger meeting between the two delegations, which included from Israel’s side: Strategic Affairs Minister Ron Dermer, national security adviser Tzachi Hanegbi, and Israel’s Ambassador to the US Mike Herzog. From the US side, National Security Council coordinator for the Middle East and North Africa Brett McGurk, and US Ambassador to Israel Tom Nides were in the room. Following the larger meeting, Netanyahu and Sullivan convened for a private discussion.

Reportedly, Netanyahu referred in the meeting to the December vote at United Nations for mandating the International Court of Justice to examine the situation in the West Bank. "The recent moves of the Palestinians in the international arena are an attack on Israel and require us to respond," Netanyahu told Sullivan according to a statement released by the Prime Minister's office.

Netanyahu and Sullivan then spoke about ways to deepen and expand the Abraham Accords, to include more countries in the region. Netanyahu is especially interested in normalization, or at least in making a breakthrough in that direction with Saudi Arabia.

Earlier on Thursday, Sullivan met with Hanegbi. The two national security advisers discussed cooperation between Israel and the United States, especially on the Iranian file, and continuing the strategic-technological dialogue launched a few weeks ago. After that meeting, Sullivan and Hanegbi met virtually in a four-way Zoom call with their counterparts from the Emirates and Bahrain, pledging to continue deepening the Abraham Accords and regional cooperation.

Concluding his day in Jerusalem, Sullivan met with Israel's Foreign Minister Eli Cohen. The minister said at the meeting that international massive, immediate and comprehensive pressure is required in every area where Iran has an interest, to bring about a change in Tehran's behavior. He noted that now is the time to harness the Europeans to efforts of increasing pressure and sanctions on Iran.

Sullivan's visit, his first since the Netanyahu government was established, lays groundwork for an anticipated trip for Secretary of State Antony Blinken to Israel in the coming weeks, and ahead of the Negev Summit in Morocco with the participation of the foreign ministers of the countries of the Abraham Accords this spring.

It comes on the backdrop of American apprehensions over far-right policies of the new Netanyahu government. Nides denied last week that the Biden administration has imposed a boycott on far-right National Security Minister Itamar Ben-Gvir, but noted that Washington would primarily be working with Netanyahu. “We’ll work with everyone. But in principle, [who] I’ll be working with is the prime minister,” he said.