President Joe Biden is expected to arrive in Israel in late June. 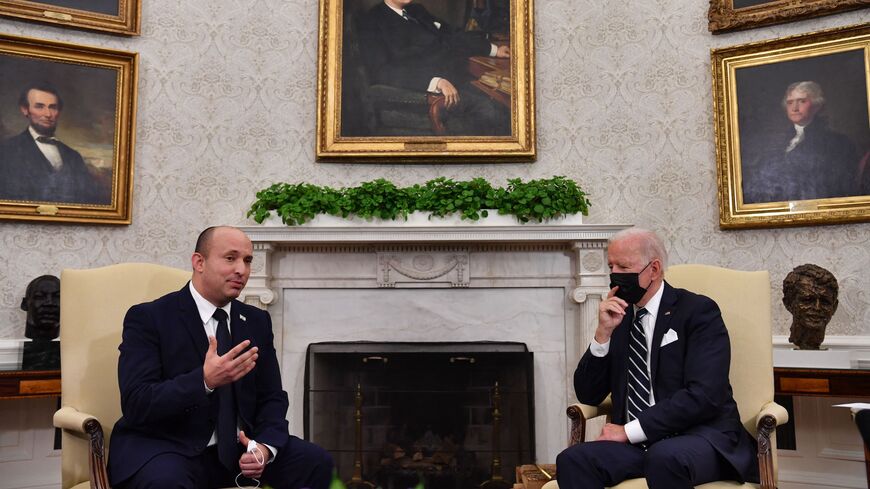 US President Joe Biden meets with Israeli Prime Minister Naftali Bennett in the Oval Office of the White House in Washington, DC, on Aug. 27, 2021. - NICHOLAS KAMM/AFP via Getty Images

A senior American delegation arrived in Israel May 1 to prepare the upcoming visit of President Joe Biden. The official date of Biden’s arrival has not been announced yet, but it's likely to happen in late June. Biden is expected to participate in the G7 summit in Germany June 26 and the NATO annual summit in Spain on June 29. His visit to Israel will probably be part of this European tour.

While the program has not been concluded yet, reports say Biden will meet separately with President Isaac Herzog and with Prime Minister Naftali Bennett. He might also address the Israeli public, the way former President Barack Obama did in 2013. Biden is also expected to travel to Ramallah in the West Bank, where he will meet with Palestinian President Mahmoud Abbas.

Biden's Israel visit was announced by the White House in a readout of the April 24 phone call between the American leader and Bennett. The readout noted, "The two leaders emphasized the strong personal bond they have developed since the prime minister’s visit to Washington last summer. This personal relationship has animated the work of our diplomatic and national security teams, enabling both countries to arrive at common positions on difficult matters. … The President also accepted an invitation to visit Israel in the coming months." Bennett’s office also confirmed the expected visit without offering any details.

Several diplomatic and strategic issues will reportedly be discussed during the trip such as Iran, Syria, broadening the Abraham Accords, the lack of negotiations with the Palestinians, the Israeli settlements and Washington’s intention to reopen the American consulate in Jerusalem. Biden is expected to emphasize his affinity to Israel, his commitment to its security and the strong alliance between the two countries.

Reports yesterday said that Washington and Jerusalem are also discussing possibly holding a regional summit. The idea was apparently discussed last month, when Israel’s national security adviser Eyal Hulata visited Washington. Reports say the proposal is still in its early stages. It could build on the regional Negev summit convened by Foreign Minister Yair Lapid in late March that brought together the foreign ministers of Israel, the United States, the United Arab Emirates, Bahrain, Morocco and Egypt. Still, it is unclear whether such a summit will take place.

Another issue discussed ahead of the visit is the West Bank settlements. During the coalition talks that preceded the establishment of the current government, Bennett’s Yamina Party presented construction in settlements to accommodate growth there as condition for it to join. Settler leaders have been pushing Bennett in recent months to fulfill his political commitment to them and approve plans for the construction of thousands of new housing units for settlers in the West Bank.

For this to happen, Defense Minister Benny Gantz must convene the High Planning Committee for the West Bank. Gantz has reportedly decided not to do so until after Ramadan so as not to escalate existing tensions over the Temple Mount. It now seems that Jerusalem is discussing with Washington when to convene the committee and what decisions will be made there. Israel might do it as soon as next week so as to distance it from Biden's visit, and it might approve the construction of not only homes for settlers, but also housing units for West Bank Palestinians to counterbalance the move.

Biden’s 2010 visit to Israel, when he served as vice president, was marred by Israel's announcement that it was authorizing the construction of 1,600 housing units for settlers. Caught unprepared, the Obama administration was furious at the timing. At a joint press conference with Abbas in Ramallah, Biden publicly condemned the plan, saying, "It is incumbent on both parties to build an atmosphere of support for negotiations and not to complicate them. Yesterday the decision by the Israeli government to advance planning for new housing units in east Jerusalem undermines that very trust, the trust that we need right now in order to begin … profitable negotiations."

Biden's condemnation caused the Israeli government great embarrassment. Bennett’s government is reportedly determined to avoid a similar scene this time around, which is why a compromise must be reached on this issue before Biden’s arrival.