The government of Prime Minister Naftali Bennett authorized the construction of new housing units in settlements and legalized wildcat outposts despite the upcoming visit next month in Israel of President Joe Biden. 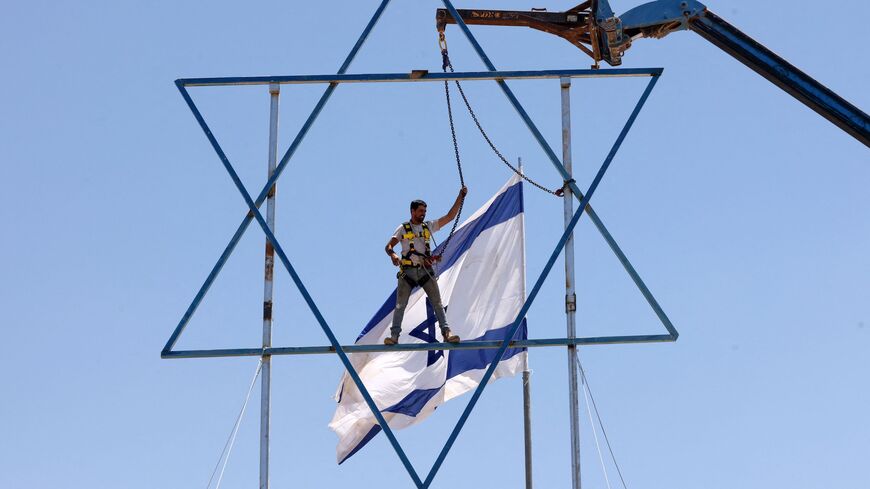 An Israeli settler adds the finishing touches to a large Star of David before evacuating the newly established wildcat outpost of Eviatar in Beita, near the northern Palestinian city of Nablus in the occupied West Bank, on July 2, 2021. - EMMANUEL DUNAND/AFP via Getty Images

The Civil Administration’s High Planning Subcommittee, which operates under the authority of Israel’s Defense Ministry, advanced Thursday plans for the construction of 4,427 new West Bank settlement housing units. Out of the 4,427 units, 2,684 homes received final construction permits. The other home plans were moved a step forward on the way to final authorization. All in all, the committee advanced 25 urban-construction plans across the West Bank, both inside larger settlement blocs and in small, isolated communities.

The 25 plans also include the legalization of three wildcat outposts: Mitzpeh Dani, Givat Ha-Bustan and Givat Oz V’gaon. Mitzpeh Dani was established in 1998 following the killing of Danny Frei in the nearby Ma’ale Mikhmass settlement. Givat Ha-Bustan is located near an older wildcat settlement named Negohot. Givat Oz V’gaon is a nature reserve with an education center that was constructed without permit after the 2014 kidnapping and murder of Israeli youths Gil-ad Shaer, Eyal Yifrach and Naftali Fraenkel. Its approved plan includes the authorization of housing units and also for the construction of a 180-room hotel. Lauding a tweet on the legalization of Mitzpeh Dani, Interior Minister Ayelet Shaked said that it was a “day of celebration for the settlement movement.”

The subcommittee was convened at the demand of Yamina Knesset member Nir Orbach, who conditioned remaining in the coalition on this move. Having lost his majority April 6 after Yamina legislator Idit Silman quit the coalition, Prime Minister Naftali Bennett was left with little choice over the matter. The subcommittee was last convened on October 2021. At the time, it advanced construction plans both for West Bank settlements and Palestinian villages. Reportedly, the subcommittee is currently debating also advancing construction of some 1,000 Palestinian homes in the West Bank.

The Israeli move comes roughly one month before the expected visit in Israel and in West Bank Ramallah of US President Joe Biden. In 2010, a similar move of approving settlement construction was published when then-Vice President Joe Biden was visiting the region. The Israeli decision embarrassed visiting Biden, causing a diplomatic crisis between the two countries. Jerusalem then apologized to the administration over the decision and its timing.

Reports now say Defense Minister Benny Gantz decided to convene the subcommittee now to distance it from the upcoming visit of the president. Still, last week, when Gantz first announced his decision to convene the subcommittee, the State Department criticized the move. State Department deputy spokesperson Jalina Porter said, “The Biden administration has been clear on this from the outset. We strongly oppose the expansion of settlements which exacerbates tensions and undermines trust between the parties.”

Several Israeli left-wing leaders criticized the move Thursday. Meretz Knesset member Mossi Raz said that the approval of 4,000 housing units was tantamount to "4,000 steps backwards from peace, security, morality and justice. The settlement enterprise is immoral and harms the citizens of Israel. Instead of worrying about the personal security of Israeli and Palestinian women and men, hostility is being increased.”

The Arab Joint List issued a statement Thursday saying that the government "serves the settlements and the occupation," adding that the coalition Muslim Ra’am party and coalition left-wing Meretz are both full partners in deepening the occupation. "They (both parties) are complicit in the war crimes of building settlements, and bear full responsibility, together with the entire government, for the decision today."