The advancement of plans for the construction of hundreds of housing units in West Bank settlements has created a serious rift among Israel’s coalition partners. 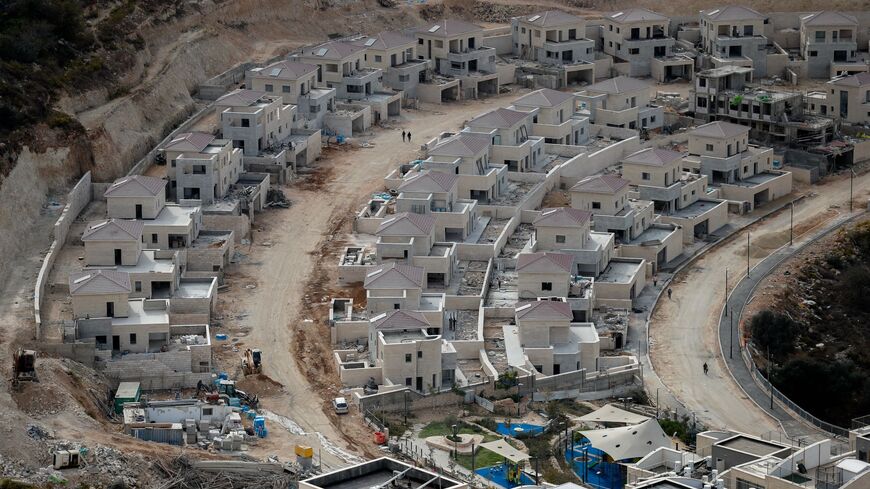 A general view shows ongoing construction work in the Israeli settlement of Givat Zeev, near the Palestinian city of Ramallah in the occupied West Bank, on Oct. 28, 2021. - AHMAD GHARABLI/AFP via Getty Images

For almost a year, the government approved no new construction in the West Bank. But on Oct. 27, the Civil Administration advanced plans for the construction of 3,000 new housing units in the settlements. The decision sparked a crisis both with the US administration and within the coalition.

For decades, construction in the settlements was a red line for leftist Israeli parties and organizations. They argued that it only strengthened the occupation by creating an irreversible situation on the ground. All members of Meretz, led by their three cabinet ministers, have consistently opposed further construction in the territories. With yesterday’s announcement, they are forced to confront a troubling new reality.

The members of the Labor Party, led by Transportation Minister Merav Michaeli, are also furious over the construction's approval, which left them torn between keeping the coalition intact and upholding their political and diplomatic worldview, core principles that are being trampled right in front of them.

Meretz and the Labor Party lashed out against Blue and White's chair, Defense Minister Benny Gantz, who is responsible for the Civil Administration. They seem to be ignoring the role played by Prime Minister Naftali Bennett, as attacking Bennett directly could be devastating to the coalition, which has been in power less than five months.

The vitriolic exchange within the government over the decision to move forward with the plan shows how significant the problem is, especially for the left. Although these parties will not bring the coalition down over it — at least not in the foreseeable future — it shows how fragile the coalition is. The US administration, which wants the Bennett-Lapid government to succeed, also has cause for worry.

Transportation Minister Michaeli called Gantz irresponsible following reports of a harsh conversation between him and US Secretary of State Tony Blinken. Reports leaked to the Israeli press claim that in the phone call, Blinken condemned the decision. Gantz reportedly responded that he already reduced the number of units as much as he could, while noting that he is cognizant of how sensitive the Biden administration is to the issue of settlements. He promised Blinken that he would take these issues into consideration in the future.

The conversation came after State Department spokesperson Ned Price publicly condemned the decision on Tuesday, saying that the United States was “deeply concerned about the Israeli government’s plan to advance thousands of settlement units … many of them deep in the West Bank.” He stressed that the current administration is opposed to any expansion of the settlements, saying that it was “completely inconsistent with efforts to lower tensions and to ensure calm and it damages the prospects for a two-state solution.”

The Labor Party is unimpressed by Gantz’ efforts to reduce the tension, as was evident in a tweet from the party, attacking the decision as if it were not made by an ally. “Anyone who makes political statements with international repercussions so irresponsibly, without coordinating them first and without preparing anyone for them, and anyone who approves the construction of 3,000 housing units in Judea and Samaria [the West Bank] is, how shall we say it, no [late Prime Minister Yitzhak] Rabin,” Mention of the former prime minister, who was assassinated after signing the Oslo Accords with the Palestinians, was an attack on Gantz, who frequently compares himself to the slain leader.

The Blue and White Party shot back, tweeting, “Anyone who calls on people to refuse to serve in the IDF should avoid lecturing us about showing responsibility in political and security affairs.” It was a reference to Michaeli, who said in 2010, “I think that women should not send their children to the army. I think that when there is an ongoing occupation for over 40 years, when the government in Israel does not make efforts to solve this in other ways, they should stop being willing to send their children to the army without asking questions.”

Meretz attacked Gantz more directly. Knesset member Mossi Raz responded, “Defense Minister Gantz continues act irresponsibly and do what he wants, just so that he can check off a few more items on his list.” Raz said that he hopes the defense minister would eventually act responsibly and put a stop to this destructive construction project “along with a series of populist decisions that are damaging to the government and the State of Israel.”

The fight is set against the background of last week's clash between Gantz and the left over him declaring six Palestinian groups terrorist organizations. In this case as well, the United States asked for clarifications. Cabinet ministers from Meretz and the Labor Party accused Gantz of damaging Israel and the current government.

Where does Bennett stand in this crisis?

Bennett has made no public statements about the issue, leaving Gantz as the easy target of his ministers’ outrage. On the other hand, his associates note that the expansion of construction in the settlements is an important achievement for the government and its prime minister and emphasize that this is, after all, a right-wing government.

Their concerns are entirely political. The prime minister’s Yamina Party has no real presence on the ground and is itself in crisis. The party was torn apart internally over its decision to enter a government with several parties on the left, not to mention the Arab Ra’am Party. Many former activists have since abandoned Yamina and attack its ministers in the media.

Bennett’s hands are also tied when dealing with the United States as prime minister. On one hand, conflict with the Biden administration serves his interests on the right, just as conflict with Obama served former Prime Minister Benjamin Netanyahu. On the other hand, however, he heads a coalition with parties representing the ideological left. It is impossible to tell how much they will be willing to restrain themselves when the government takes steps that run directly counter to their worldview. So far, Meretz and Labor representatives have held back. Still, they also have a base that wants to know whether any of this is worth it.