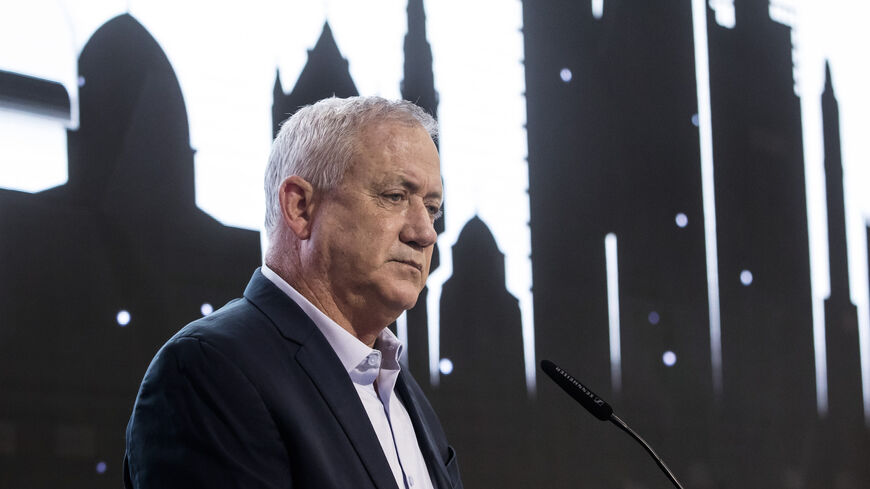 Defense Minister Benny Gantz signed an order Oct. 22 declaring six Palestinian rights groups in the West Bank would henceforth be treated as terrorist organizations. The results in the cabinet were predictable, with furious ministers on the left.

Gantz failed to notify the government in advance of the measure, which conflicted with the core principles underlying the coalition agreement and humiliated coalition partners on the left. Some ministers on the left knew those groups and their leaders personally, even maintaining a working relationship with some, contributing to the sense that Gantz’ decision was a politically motivated attempt to harm his coalition partners.

The defense minister's move has created an ideological crisis between the opposing flanks of the current government. To make matters worse, it happened at an especially sensitive time: just two weeks before the government must approve its budget. With a fragile Knesset majority, it is no a simple matter.

With the budget on the line, ministers on the left have made exerted efforts in the past four months to hold back criticism against right-wing coalition partners. They kept quiet despite government statements and policies that conflict with their worldview to avoid destabilizing the coalition. Still, this time they seem to feel that a red line had been crossed and they can no longer be silent, even if it means risking a coalition crisis that harms the image of the harmonious working environment Prime Minister Naftali Bennett has long been trying to foster.

It was in this tense atmosphere that Meretz' chair, Health Minister Nitzan Horowitz, called on Gantz Oct. 23 to share the findings that led to his decision with the rest of the cabinet.

He also launched a media blitz against the decision. In interviews with the press, he called the step “a very problematic matter,” adding that the decision “complicates things for Israel internationally" and "There are implications here for human rights and democracy.”

Labor chair and Transportation Minister Merav Michaeli joined the fray, accusing Gantz of causing serious diplomatic harm to Israel. She began a meeting of her Knesset faction on Monday by saying, “The way that this announcement was released caused enormous damage the relationship between Israel and its biggest and most important allies.” She added that she plans to discuss the matter with the new Shin Bet director, Ronen Bar, to hear details from him personally. She said she wanted to understand the how Israel found itself in this uneasy situation.

Gantz’ Blue and White Party responded, “Since Merav Michaeli doesn’t know the precise details, we suggest that she not interfere with the war on terrorism.”

Michaeli and Horowitz were not the only coalition members to speak out against the decision, with all Meretz and Labor ministers attacking Gantz in the media, as did their rank-and-file Knesset members. They insinuated that his move threatened the very foundations of the government and demanded answers.

To their chagrin, Gantz was not at all moved by the political and media storm or the charges leveled against him by his coalition partners. His spokespeople pushed back with claims that the organizations in question served as cover for groups aligned with the Popular Front for the Liberation of Palestine (PFLP) and even funded their activities. A statement from the Defense Ministry claimed that these groups “received large sums of money from European countries and international organizations, using a variety of forgery and deceit.” According to the minister, this money was used by the PFLP to advance terrorist activities, recruit and pay salaries to activists and fund the families of security prisoners and terrorists. It also stated that all six organizations employed senior PFLP members, “including activists involved in terror activity.”

Gantz’ spokespeople also rejected the statement put out by State Department Spokesman Ned Price that the United States would approach Israel for clarification as to why it declared these groups terrorist organizations and noted that Israel never provided advance warning of its intentions. In response, the Defense Ministry said that the Americans were, in fact, notified in advance, in accordance with protocol.

A spokesperson for Gantz who discussed the matter with Al-Monitor said on condition of anonymity, “The defense minister did not do anything out of the ordinary. This was a decision within his purview, so he is not obligated to notify other ministers or the cabinet in advance. In question are groups that aid terrorists. We have evidence of this, so we cannot understand why this decision caused such a stir.”

They may be right. Gantz’ staff claims that he never imagined that signing the order would cause such a commotion and that he suddenly found himself caught up in a strange political incident.

Some of the groups appearing on Gantz’ list are well-known human rights organizations. They include Addameer, which arranges legal aid for security detainees, collects data on arrests and administrative detentions and campaigns against torture. Al-Haq documents human rights violations against Palestinians in the territories, while the Palestinian branch of Defense for Children International tracks the killing of children and minors detained by Israel. The other groups in question focus on social issues. They are the Union of Palestinian Women’s Committees, the Bisan Research and Advocacy Center and the Union of Agricultural Work Committees assists Palestinian farmers, particularly in Area C. Meretz Knesset members know these groups because of their own parliamentary and extra-parliamentary activities with Israeli human rights organizations.

Meretz perceived the move as a direct attack on its agenda and its worldview. In an emotional address to the Knesset plenum on Oct. 25, Meretz Knesset member Mossi Raz said, “The government’s policy in the occupied territories do not deserve my confidence, but I am nevertheless voting yes to this confidence motion because of the alternative.”

With the coalition in turmoil, Bennett did not comment on the issue at all. He must be aware that it is weakening him politically, especially as leader of a party on the right, but has no plans to enter the fray. The fact that Gantz did not inform him either testifies to how weak Bennett sees his own position. He cannot shake up his coalition right before the budget is voted on.

Nevertheless, it is safe to assume that even the major ideological debate facing the government will not bring it down and the budget will pass. But it also signals what lies ahead. Once the budget is passed, each of the parties will be less restrained and finally be at liberty to voice to their worldviews.

Former Prime Minister Benjamin Netanyahu, now head of the opposition, is also waiting for the moment the budget is approved and the partners draw apart, when he may well destabilize the already fragile coalition.