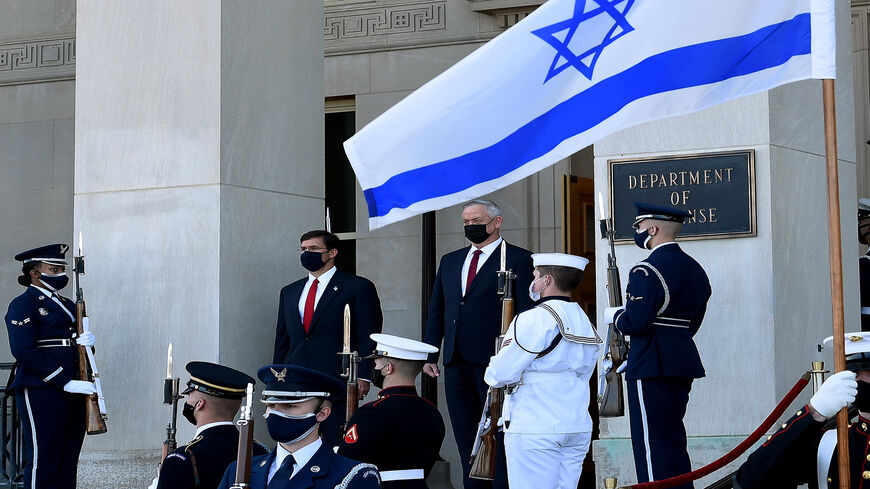 An envoy from the Shin Bet and Israel’s Foreign Ministry will leave for Washington this week, in an attempt to appease tensions with the Biden administration. The diplomatic crisis erupted Oct. 22, after Defense Minister Benny Gantz designated six Palestinian civil society groups as terrorist organizations. The Israeli envoy is expected to present his American interlocutors with information and proof that the targeted groups are directly linked or affiliated with the Popular Front for the Liberation of Palestine (PFLP).

The six groups designated by Gantz as terrorist organizations are the Union of Palestinian Women’s Committees, ADDAMEER - Prisoner Support and Human Rights Association, Bisan Center for Research and Development, Al-Haq organization, Defense for Children International - Palestine and the Union of Agricultural Work Committees. A statement by the Defense Ministry Oct. 22 said, “Those organizations were active under the cover of civil society organizations, but in practice belong and constitute an arm of the [PFLP] leadership, the main activity of which is the liberation of Palestine and destruction of Israel.”

The statement said that all six organizations employed senior PFLP members, including activists involved in terror activity. It further noted that grants received by these groups from European Union member states and the United Nations “served the Popular Front for payments to security prisoners’ families and martyrs, wages for activists, enlistment of activists, promotion of terror activity and strengthening, promotion of the Popular Front activity in Jerusalem and distribution of the organization’s messages and ideology.”

The move sparked criticism by the EU, the Palestinian Authority and international human rights organizations. The EU delegation to the Palestinian territories acknowledged financing activities by some of the groups, stating, “EU funding to Palestinian civil society organizations is an important element of our support for the two-state solution.” It also said past allegations about misuse of these funds were not substantiated.

The six groups said in an Oct. 23 statement that they will not be deterred by what they called efforts to silence them.

State Department spokesman Ned Price said after the announcement that the Biden administration was not given advance warning of the designation. “We will be engaging our Israeli partners for more information regarding the basis for the designation. We believe respect for human rights, fundamental freedoms and a strong civil society are critically important to responsible and responsive governance,” Price said.

The diplomatic disagreement then aggravated, when unnamed Israeli officials contradicted Price’s claim arguing that some American officials were told about the Israeli decision in advance. An unnamed Israeli defense official was quoted as saying, “Officials in the American administration were updated in advance of the intention to make this declaration and they received intelligence information about the matter.”

Another Israeli defense official told reporters Oct. 24 that the intelligence connecting the organizations to the PFLP was ironclad, stating that the compiled information contained “unequivocal evidence that includes video footage, photos and payment receipts that tie the said groups to the backing of terror activity.”

Reports in Israel today say the office of State Prosecutor Amit Aisman had reviewed the information in question ahead of the decision and greenlighted it. Apparently, in some cases, only the managers of the targeted groups knew that cash was being funneled to the PFLP.