Israel shut down the offices of seven Palestinian NGOs in the West Bank per a military decision, which these NGOs seek to confront with a wide international campaign. 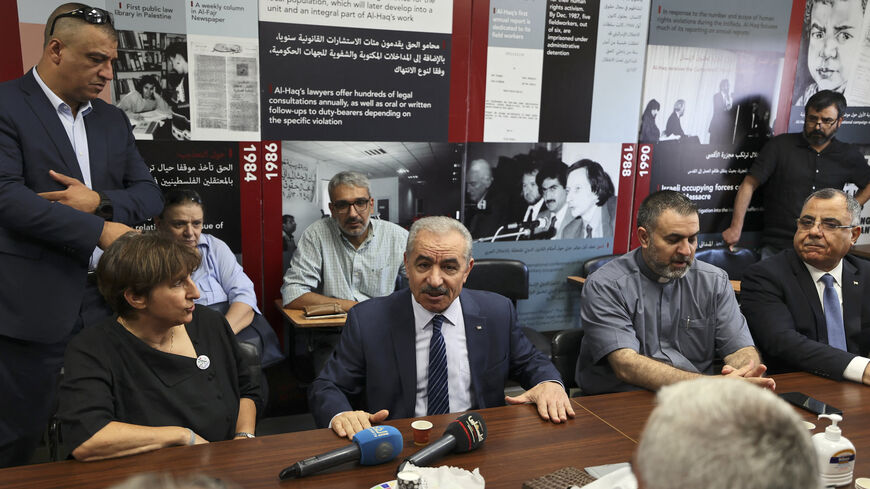 RAMALLAH, West Bank — Seven Palestinian human rights and civil society organizations are betting on an international campaign launched by international institutions and unions, to pressure Israel to reverse its decision to shut them down.

On Aug. 18, Israeli forces raided the headquarters of seven nongovernmental organizations (NGOs) in the West Bank, before forcing them to shut down, under the pretext that they are terrorist organizations that finance the activities of the Popular Front for the Liberation of Palestine’s armed wing.

Al-Haq Director General Shawan Jabarin told Al-Monitor, “We are continuously working on revoking the Israeli military order, which would allow Israel to arrest the directors or employees of the targeted NGOs if they continue to work, since it would be a violation of a military order.”

He said, “The NGOs will never stop working and we have mobilized the widest global campaign of solidarity with at least 1,000 international institutions, including labor unions, lawyers' unions and several other unions and institutions around the world — some of which have already begun issuing statements and condemning the Israeli decision.

Jabarin added, “We are also counting on European countries to take practical positions against Israel, such as imposing sanctions on it.”

In October 2021, the Israeli authorities issued a decision to classify six of these NGOs (with the exception of HWC) as “terrorist organizations.” Back then, several European countries stopped working with these NGOs, before resuming their relations with them on July 11, due to the lack of sufficient Israeli evidence.

On Aug. 18, the same day as the Israeli raids, representatives of 16 European countries visited Al-Haq's office after its closure to express solidarity with the Palestinian NGOs, whose representatives were also present.

“This visit defies the Israeli military order and shows that the Europeans do not recognize the decision,” Jabarin said.

He noted, “Israel's actions are a message to the European countries that have announced their continued support for the Palestinian NGOs since the evidence to shut them down was not convincing enough, which provoked a strong reaction from Israel against these countries.”

Jabarin added, “The Israeli [move] is a message of defiance to the Europeans. Thus, they [Europeans] must prove they do not comply with the Israeli position and must be ready to impose sanctions on Israel.”

He said that the NGOs' representatives asked the European diplomatic missions during their visit to Al-Haq’s office to convey their messages to European capitals and to the European Union, explaining, “We demanded them to end the Euro-Israeli Partnership Council and to take practical steps against Israel."

Jabarin stressed that the move to shut down the NGOs was a political decision. “Israel has implemented the decision now, ahead of the elections, as part of the electoral campaign. It also believes it can get away with it in light of the solidarity campaign from Germany in the wake of President Mahmoud Abbas’ recent statements,” he said.

During a visit to Berlin Aug. 16, Abbas accused Israel of committing “50 holocausts” against the Palestinians. The remarks sparked outrage among world leaders, prompting Abbas to walk back the statement.

Shadi Othman, spokesman for the EU Commission in Jerusalem, told Al-Monitor, “The EU conducted an internal review of the documents submitted by Israel regarding the Palestinian NGOs, and found no significant and substantial evidence against the organizations. So there was no reason to continue suspending some contracts or stop supporting their projects. We are back to funding and working with these NGOs as usual.”

He said, “The EU has decided to resume working with these NGOs despite Israel shutting down their offices.”

The Israeli raid of the NGOs’ offices constituted a great embarrassment for the Palestinian Authority (PA). Ramallah is the PA’s political, security and economic hub, and it is responsible for the work of these NGOs, especially since some offices, such as Addameer’s, are only a few meters away from the Palestinian government headquarters.

In response to the Israeli raid, Palestinian Foreign Minister Riyad al-Maliki told Voice of Palestine radio Aug. 18, “Work is underway to complete the legal procedures to classify some Jewish NGOs as terrorist organizations and demand the international community not to work with them.”

Palestinian Prime Minister Mohammad Shtayyeh visited Al-Haq offices Aug. 18 to express solidarity with the NGOs, stressing that the targeted organizations will continue their work because they are all registered with the State of Palestine and operate within the legal frameworks.

“We are ready to defend them,” he added.

Meanwhile, Abbas received delegations from the targeted NGOs at the presidential headquarters in Ramallah Aug. 20.

“Shutting down the offices of NGOs is unacceptable. They shall resume their work and we will not allow this Israeli policy to continue. We will protect the rights of our people and we are extensively communicating with the relevant parties to stop these Israeli attacks against our institutions that operate in accordance with international law and human rights,” Abbas stressed.

Despite the campaigns of condemnation and denunciation, the NGOs believe that without imposing sanctions on it, Israel will not back down.

Ubai al-Aboudi, executive director of Bisan Center for Research and Development, told Al-Monitor that Israel does not care about international pressure and condemnation as long as it knows that it will not be held accountable and punished.

He said that the NGOs demanded the European missions during their visit to Al-Haq office to take steps such as stopping the supply of arms to Israel and ending joint cooperation programs, especially since human rights are an essential part of the Europeans' foreign policy. “We thus asked them to interpret statements and positions into practical measures and accountability,” Aboudi noted.

He added, “The NGOs will carry on with their work, operating in accordance with Palestinian law, and will not abide by the decisions of the occupation authorities.”

On Aug. 18, US State Department spokesperson Ned Price said at a press briefing, “We are concerned about the Israeli security forces’ closure of the six offices of the Palestinian NGOs in and around Ramallah today. We have reached out to the Israeli governments — including at senior levels, including here from Washington as well as from our embassy in Jerusalem — for more information regarding the basis for these closures. And we'll … continue to seek additional information and to convey our concern directly and privately to our Israeli partners."

Commenting on the US position, Aboudi said, “The US administration previously obtained information from Israel about its allegations against us, but it was not convinced. It is now asking for new evidence, even though Israel has nothing against us. So what is the US administration waiting for? The failure to take action against Israel would be considered a US green light to continue its attacks.”