Palestinians are hoping an Irish bill that would ban imports of products from occupied territories will help launch a unified European stance against Israeli settlements. 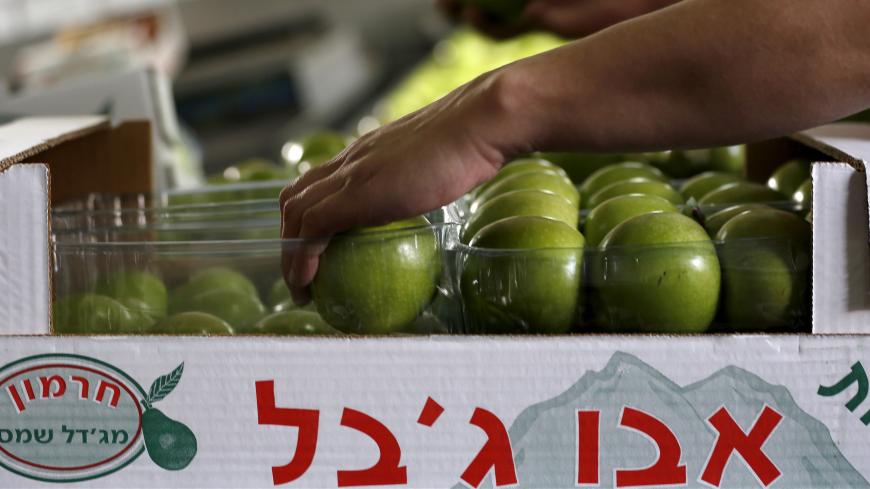 Workers pack apples at a factory in the village of Majdal Shams in the Israeli-occupied Golan Heights, Sept. 7, 2014. - JALAA MAREY/AFP/Getty Images

RAMALLAH, West Bank — In a first-of-its-kind move in Europe, the Irish Senate has passed a bill designed to block imports of goods made in Israeli settlements located in the Palestinian territories. Though the bill has a long way to go before it can reach the president's desk, Palestinians say they will use this success as a springboard to campaign in other countries.

The Control of Economic Activity (Occupied Territories) Bill 2018 doesn't specifically mention Israeli settlements, but it refers to “occupied territories” as defined in international law and in accordance with UN Security Council resolutions. For example, UN Resolution 242 calls on Israel to withdraw from lands it occupied in 1967. Some observers think the Irish bill is worded carefully to minimize Israeli pressure.

The bill, which was submitted by Sen. Frances Black and passed July 11 by a 25-20 vote, will have to overcome a series of parliamentary proceedings and legal consultations before it is put to a vote in the full Irish parliament.

In January, the draft law was tabled when Dublin asked lawmakers to soften the language. Black kicked off a campaign in support of the bill, backed by a number of Palestinian civil society organizations and several Irish organizations working in solidarity with the Palestinians. The Senate finally approved the bill after advocates secured the support of the powerful Fianna Fail party.

The Senate stance set off a round of applause among Palestinians. Palestinian Prime Minister Rami Hamdallah thanked the Senate in his July 12 speech in Ramallah during the launch of the European Joint Strategy in Support of Palestine. He called on other European lawmakers to follow suit.

Saeb Erekat, the secretary-general of the PLO Executive Committee, said in a press release published July 11 by Wafa, the Palestine News Agency, “The Seanad [Senate] has conveyed a clear message whereby talks about a two-state solution should be supported by concrete action.”

As soon as the Senate ratified the bill, work began to have it submitted to parliament for a vote, Mustafa Barghouti, the secretary-general of the Palestinian National Initiative, told Al-Monitor.

“The bill will make it through parliament because it is backed by a majority [in the Senate]," he said. "It is set to have a financial and moral effect, as it will prohibit the import of settlement products once it is ratified. Under this bill, those who engage in such trade will be either sentenced to imprisonment or fined heavily.”

Barghouti expects the bill to be put up for a vote in parliament in the fall.

Barghouti has visited Ireland three times since mid-2017 to lobby for the bill. During that time, he met with party leaders, parliamentarians, the foreign minister and the president, he told Al-Monitor.

Ireland and Palestine enjoy long-standing close relations. According to the Palestinian Foreign Ministry website, the relations date back to the late 1970s, and Ireland was the first EU member to call for establishment of a Palestinian state in 1980. Ireland established a representative office in Ramallah in 2000, and the Mission of the State of Palestine opened in Ireland in 2001.

“Ireland is the first European country to take a practical step against settlement products without waiting for a collective decision from the European Union. This is an argument that many European countries have invoked to justify their nonissuance of such laws,” Barghouti said. "Despite the lack of European unanimity, the adoption of the law in Ireland [would infer] that other countries can follow suit."

He added, "A number of institutions in a number of European countries are looking to pass similar laws." He declined to say which countries.

Palestinians have been taking political and diplomatic steps in international forums to condemn settlements as undermining the two-state solution. The Palestinian effort, backed by Arab support, resulted in the UN Security Council issuing Resolution 2334 in December 2016. The resolution reaffirmed that Israel's establishment of settlements in the Palestinian territories occupied since 1967, including East Jerusalem, has no legal validity and constitutes a flagrant violation under international law.

The Irish bill involves several legal dimensions and details, said Shawan Jabarin, the director general of Al-Haq, a human rights organization in Ramallah, and the secretary-general of the International Federation for Human Rights. The bill “criminalizes those who deal with the settlements and sentences them to more than one year in prison or holds them liable to a fine of 250,000 euros [$291,000]," he told Al-Monitor.

Israel recalled its ambassador after the bill passed July 11 and summoned Ireland's ambassador. The Israeli Foreign Ministry condemned the bill as a dangerous and extremist step that will have grave consequences for the political process with Palestinians, the Times of Israel reported.

Jabarin said the bill would have failed without the support of the Irish Fianna Fail party. He also revealed that Al-Haq had invited and hosted a delegation from the party to visit the Palestinian territories not long before the vote. "After the delegation was briefed on the settlement activity in the West Bank, it rushed to make recommendations to support the law," he said.

Fianna Fail, one of the most prominent parties in Ireland, has good relations with Palestinian parties, as does the nationalist Catholic party Sinn Fein.

Jabarin said Palestinians will benefit from the bill, and its repercussions will be felt across Europe. In November 2015, the European Commission issued guidelines for labeling products coming from the Israeli settlements in the West Bank, East Jerusalem and the Syrian Golan Heights to Europe, stating that consumers have the right to know the source of the goods they are buying. But this bill eventually could lead to a European ban and criminalization of such trade, Jabarin said.

The bill “will cause great damage to the economy of the settlements and will internationally damage the image of Israel, which is trying to portray the settlements as a natural part of it,” Jabarin said. Al-Haq will be working with other institutions on a campaign to get similar laws issued first in two other European countries, he said, though he again refused to disclose which countries.

“We will encourage [European] parliamentarians to visit us and see the settlement reality with their own eyes,” he added.