Palestine is preparing files on Israeli settlement activity and the 2014 war on Gaza for submission to the International Criminal Court come April 1. 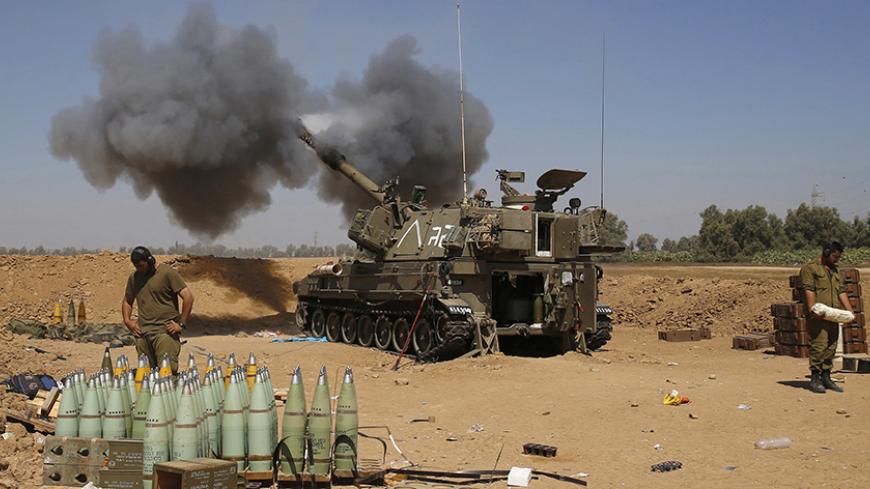 An Israeli mobile artillery unit fires towards the southern Gaza, Aug. 1, 2014. Israeli air and artillery bombardment of the eastern edge of Rafah killed around 150 people in a matter of hours that day, drawing international condemnation. - REUTERS/Baz Ratner

RAMALLAH, West Bank — Palestine’s accession to the International Criminal Court (ICC) on April 1, announced Jan. 6 by UN Secretary-General Ban Ki-moon, will provide an opportunity to investigate Israeli leaders on charges of alleged war crimes. This, in turn, will have an impact on the nature of the Palestinian-Israeli conflict and its instruments. After signing the Rome Treaty, the Palestinians will be allowed to present legal filings lodging complaints against Israeli officials at the court, but such moves also present obligations and challenges for Palestinian institutional authorities.

An ICC prosecutor announced Jan. 16 that the court would open a preliminary investigation into possible Israeli war crimes committed against Palestinians since June 2014, the month before the most recent Gaza war began. This came after Palestine submitted a declaration Jan. 1 to the ICC stating its acceptance of the court’s jurisdiction retroactively to June 13, 2014. Under Article 3.12 of the Rome Statute establishing the ICC, the court thus acquired judicial authority to investigate alleged crimes committed in the occupied Palestinian territories, including East Jerusalem, since the June date.

In reference to the preliminary investigation into the Gaza war, Hassan al-Aouri, a legal adviser to President Mahmoud Abbas, told Al-Monitor, “We will support this." He also said: “We will submit another file regarding settlements. The latter affect the core of the conflict and are considered a war crime.”

Aouri said work is already underway on the settlements file. The Rome Statute states that war crimes include “the transfer, directly or indirectly, by the occupying power of parts of its own civilian population into the territory it occupies, or the deportation or transfer of all or parts of the population of the occupied territory within or outside this territory.”

Shawan Jabarin, director of the Al-Haq Foundation, told Al-Monitor: “The prosecutor will obtain information and inquiries about the situation in Palestine from individuals, institutions and official, civil and legal organizations. Based on the results of the analysis, the criminal prosecutor will decide whether to ask the judges to open a [formal] investigation, continue to collect information or refuse to initiate an investigation.”​

Nasser al-Rayes, legal adviser to Al-Haq, spoke to Al-Monitor about the documentation prepared by official and civil entities on the settlements, stating, “It includes information on the territories confiscated by the occupation and the number of settlers in the West Bank, as well as military orders to confiscate land and the theft of water and natural resources.”

Aouri said that the Foreign Ministry is in charge of communicating with the ICC and preparing and submitting files, given that it has the studies and reports required for this. On Jan. 21, the Executive Committee of the Palestine Liberation Organization (PLO) issued a decision to form a supreme national council, comprised of institutions from the PLO and the Palestinian Authority (PA), as well as civil society organizations, to oversee following up on priority issues with the ICC.

Wasil Abu Yousef, a member of the PLO’s Executive Committee, told Al-Monitor: “The Executive Committee decided to form this council — headed by Saeb Erekat and comprising all factions, including Hamas, Islamic Jihad, and human rights and civil society organizations — in order to go ahead with two primary issues: settlements and the aggression on Gaza.”

The various institutions have many files and documents regarding settlements in the West Bank and Jerusalem.

In the meantime, the PA has also sought the assistance of international rights activists and lawyers to plead their case at the ICC.

Aouri said, “The Foreign [Ministry] is communicating with experts and lawyers to appoint them to handle this issue, given their legal expertise and capabilities, which we want to take advantage of, as well as their relations with international organizations and the Arab Lawyers Union.”

Palestinian human rights and legal institutions are conducting ongoing consultations and meetings on legal strategy. “There are weekly meetings to discuss plans and action mechanisms for the Palestinian leadership, as well as how they can contribute effectively," Rayes said. "This is in addition to discussing the obligations they are bound by that must be respected.”

Meanwhile, the commission of inquiry on the Israeli war against Gaza established by the UN Human Rights Council in July 2014 began its investigation, taking victims' testimonies, which will be presented to the council in March 2015. Al-Haq's Jabarin has suggested to the Palestinian leadership that the report be submitted to the ICC prosecutor, based on Article 14 of the Rome Statute concerning referrals of possible crimes, to strengthen the Palestinian position.

Palestine’s accession to the ICC will present a number of legal and political challenges for the PA. Jabarin said that joining the ICC requires that work begin to prepare Palestinian laws to align with the requirements of membership in the court, in particular the Palestinian penal code. It must address the crimes included in ICC laws and statutes and that fall within its jurisdiction to ensure legal proceedings for crimes within the court’s competency.

Jabarin also observed that Palestine must also meet the financial obligations that come with ICC membership in addition to preparing to participate in the selection of ICC judges in elections in the Assembly of States Parties held every three years. The biggest challenge the Palestinians face will be Israel’s ability to file cases against Abbas for signing an agreement with Hamas to form a national reconciliation government and against officials in the Palestinian factions, including Fatah and Hamas, for the firing of rockets at Israeli territory.

Writer Jihad Harb told Al-Monitor that because of the Palestinians application to join the court, the PA also faces obstacles related to economic issues linked to a possible cut off of US financial assistance and Israel’s freeze on the transfer of tax revenues as well as the ability to unify Palestinian efforts and restore unity. Another challenge will be agreeing on a unified position in the event Palestinian officials are investigated by the ICC, as well as preparing for the possibility that Palestinian authorities will be pursued in US courts for alleged liability for bombings in Israel and be required to pay financial compensation to American victims or their families.

Harb said that without the provision of an Arab financial safety net and a unified political structure, the PA in its current composition cannot withstand massive financial pressures in the coming months. It would also have difficulty resorting to international organizations, such as the ICC, for assistance because of the financial resources required.

For now the Palestinians are awaiting April 1, when preliminary files will be submitted to the ICC to air their grievances against Israel.