The International Criminal Court’s ruling that it has jurisdiction over the Palestinian territories has pleased many residents but alarmed others that Palestinian leaders could face investigations they fear will be political. 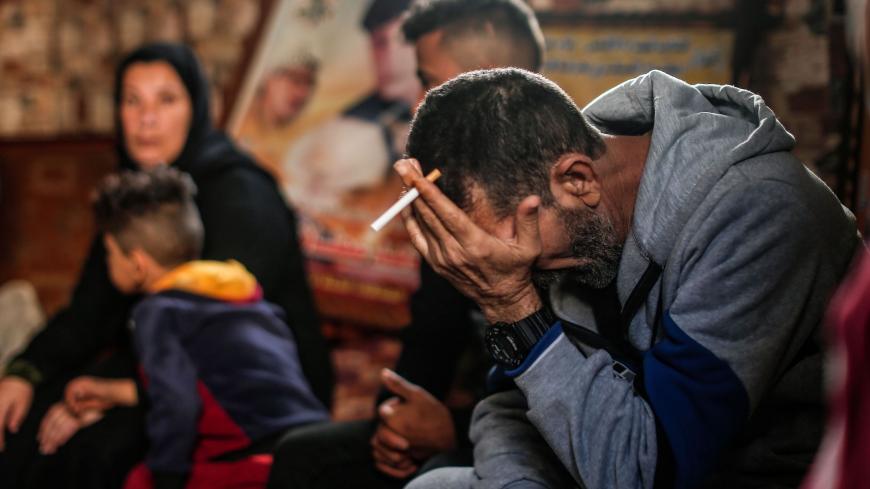 Hadi, the father of Mohammad, one of the four victims of the extended Bakr family, gather at their house in al-Shati refugee camp in Gaza City on Feb. 7, 2021, surrounded by posters in memory of four children who were killed while playing on the beach during the 2014 Israeli-Palestinian conflict in Gaza. - MAHMUD HAMS/AFP via Getty Images

RAMALLAH, West Bank — Palestinians welcomed the International Criminal Court’s ruling Feb. 5 that it has jurisdiction to investigate war crimes alleged to have been committed in the Palestinian territories occupied by Israel since 1967, namely the Gaza Strip and the West Bank, including East Jerusalem.

Yet the ruling also stirred concerns that the ICC could investigate leaders of the Palestinian factions in Gaza, such as the Islamic Jihad and the Hamas movement.

He added, “The people’s right to resist occupation is internationally recognized." If the ICC goes after Palestinians for resisting the occupation, it would be violating international laws and resolutions. "This would undermine the entire [judicial] international system, with unpredictable repercussions.”

Palestine formally joined the ICC in April 2015. At the time, most Palestinian factions including Hamas welcomed the move, with the exception of the Islamic Jihad. The Islamic Jihad's leader at the time, Khaled al-Batash, refused, saying the court and its rulings are politicized. “The court reflects the balances of power in the international community,” Batash said, expressing doubt that it could achieve justice for Palestinians.

Hamas leader Osama Hamdan told Al-Monitor, “Hamas has nothing to fear. It is resisting Israel and defending its people in accordance with international treaties and conventions.”

Hamdan continued, “No court will be legitimate if it yields to pressure to implement policies that contravene the basic principles on which it was founded. The ICC was created to do justice to the oppressed and not to stand by the oppressor. If this principle is violated, no one would blame the oppressed for any subsequent behavior.”

Al-Monitor asked Hamdan about the possibility the ICC could issue a subpoena to Hamas leaders over events in Gaza such as the killing of people accused of collaborating with Israel during the 2014 war. “There is a wide-scale campaign aimed at diverting the ICC’s path,” he said, in reference to US, Israeli and other Western countries’ pressure on the ICC to investigate Palestinian leaders for war crimes.

If Palestinian leaders were summoned, it would most likely be over two incidents in 2014. The first is related to Palestinian factions firing rockets while responding to the Israeli aggression on the Gaza Strip. The other is the execution of 18 Palestinians in the Saraya prison complex in the Gaza Strip, which was bombed by Israel. The prisoners had escaped the prison and were tracked down by Hamas militants who killed them in the streets after accusing them of spying for Israel.

Al-Monitor was unable to obtain a comment from the Islamic Jihad about the possible ICC summoning.

Ammar Hijazi, assistant to the foreign minister for multilateral affairs who is also in charge of the ICC file, stressed the need for Palestine to cooperate with the ICC prosecutor.

He told Al-Monitor that cooperating with the ICC does not necessarily mean agreeing with its findings. “If we feel a case is not right, we will raise our voice. Our position does not necessarily have to be in line with the ICC prosecutor,” he said. “One should not fear accountability for something one did not commit. The Palestinian side has not committed war crimes during the conflict with Israel and we have evidence to submit if the ICC prosecutor decides to investigate such allegations.”

On potential subpoenas Hijazi said, “We have to cooperate. We have nothing to fear or hide. It is best to cooperate with the ICC prosecutor.”

The ICC could summon some Palestinian leaders in an attempt to appear fair, he said. “The pleas and evidence against Palestine on committing war crimes will appear weak compared to those we can invoke against Israel.”

Shawan Jabarin, director of the Al-Haq Foundation, a Palestinian human rights organization based in the West Bank, argued that Palestinians underestimate the possibility of ICC summoning Palestinian leaders. “The Palestinian side has yet to seriously refute the allegations raised in the international commissions about what happened during the 2014 war in Gaza,” he told Al-Monitor, arguing that the internal divide further impeded a proper response.

Jabarin noted, “Several allegations were made and the Palestinian Public Prosecution ought to thoroughly examine them, but this did not happen. Reconciliation between Fatah and Hamas should create a favorable environment to properly deal with these allegations.”

He explained that reconciliation should unify the Palestinian judiciary, and an investigation committee must be set up to examine all allegations and respond to them.

Jabarin continued, “I believe the ICC does not examine war crimes committed by only one entity. It could take a more stringent position toward the Palestinians because we are [divided and vulnerable]. No Palestinian investigative bodies examined these war crime allegations, came up with answers and results and formulated a clear legal position to keep the ICC from intervening.”

He concluded, “There is still an opportunity for the Palestinians to get things back on track by achieving reconciliation.”