PA vows to sue US ambassador over support to Israeli settlements

The Palestinian Authority has threatened to sue former US Ambassador to Israel David Friedman after he recognized the City of David settlement project in Jerusalem. 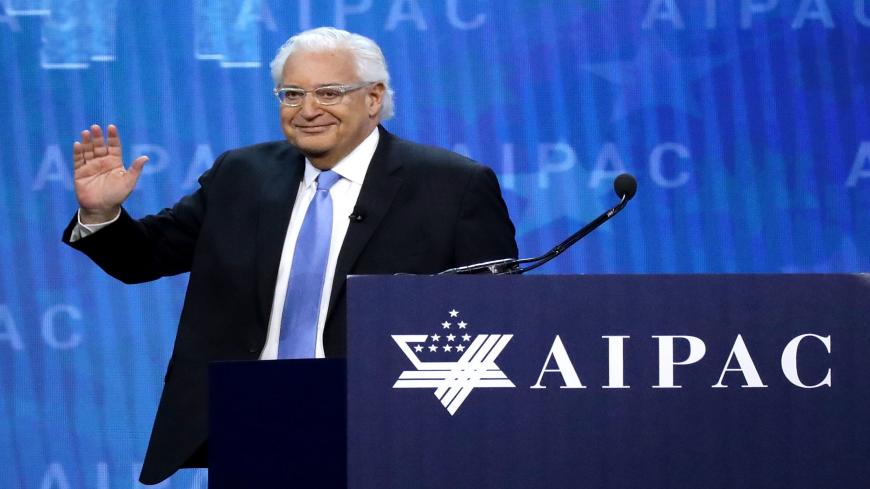 RAMALLAH, West Bank — A day after US President Joe Biden was sworn in on Jan. 20, the Palestinian Authority (PA) vowed to legally pursue former US Ambassador to Israel David Friedman after his recognition and approval of a settlement project called the City of David in the center of Jerusalem.

No sooner had Friedman — whom Palestinians call “the settler” — wrapped up his tasks than he gave a huge present to Israel by recognizing the City of David on Jan. 18 and praising it as “a testament to America’s Judeo-Christian heritage and founding principles.”

The US Commission for the Preservation of America’s Heritage Abroad is working with the Elad settlement organization, which has been working for years to turn the town of Selwan located south of Al-Aqsa Mosque into the City of David by seizing dozens of Palestinian houses and carrying out extensive excavations.

In June 2019, wielding a sledgehammer, Friedman had inaugurated the “Pilgrimage Road,” which consists of a tunnel dug under the houses of Palestinians in Selwan.

The Elad organization has seized more than 60 properties in Selwan where over 55,000 Palestinians live. It is also digging tunnels under the town and trying to build the supposedly historical City of David over its ruins.

Friedman, who is a staunch supporter of settlements and an opponent of the two-state solution and the establishment of a Palestinian state, was appointed as US ambassador to Israel in March 2017. He had been considered the godfather of settlements in the Trump administration, which recognized in March 2019 the sovereignty of Israel over the occupied Syrian Golan Heights and declared in November 2019 that it did not consider settlements in the West Bank as a violation of international law.

Ever since Friedman was appointed, the Palestinians have criticized him and refused to deal with him because of his blatant support for Israeli settlements.

Ahmed al-Deek, political adviser to the Palestinian minister of foreign affairs, told Al-Monitor, “The ministry will personally oversee the matter [of recognizing the City of David] with legal experts and concerned parties to seek accountability for the settler Friedman before competent international courts.”

He said, “The ministry has formed a team that started taking practical steps to prepare the black file of Friedman who played a major role in most of the Trump administration decisions in favor of settlements. These decisions constitute a violation of international legitimacy and international treaties and resolutions.”

Deek noted that Friedman’s recognition of the City of David, which settlers want to build over Selwan and in the surroundings of Al-Aqsa Mosque, is illegal and constitutes part of the Trump administration’s gifts to Israel.

He added, “The Ministry of Foreign Affairs has started high-level deliberations with local and international legal experts and advisers to determine the legal steps needed to file lawsuits against Friedman over his crimes against us [Palestinians] and violations of international law.”

He explained that the goal behind suing Friedman is to shift from formal and verbal condemnation and denunciation to practical steps in prosecuting Israel and its settlement project. He said, “We have always wanted to impose sanctions that would deter Israel and anyone supporting its settlement projects. Countries that care about human rights must see this task through.”

Palestine acceded to the United Nations in 2012 as an observer, nonmember state. In 2015, Palestine joined the International Criminal Court (ICC), and it has been threatening to pursue Israel in court over its settlement project ever since. But so far, the pursuit has not materialized.

Deek commented on the slow procedures in the legal pursuit before the ICC, saying that it is due to pressure from the United States and some countries on the ICC and some judges to prevent it from looking into the three files submitted by Palestine regarding the Israeli war on the Gaza Strip, the detainees in Israeli prisons and the settlements.

He noted, “Palestine has implemented all necessary measures and submitted all the reports and pleadings to proceed with the files before the ICC and begin the trial of the war criminals.”

In April 2020, ICC Prosecutor in The Hague Fatou Bensouda insisted that the court has jurisdiction to investigate war crimes in Palestine, which means empowering the PA to transfer the criminal competence on its territories to the ICC.

Shalaldeh believes that Friedman’s actions amount to a hate and incitement crime against the Palestinian people and deprives them of their right to self-determination, in addition to violating their rights. Friedman, according to Shalaldeh, also violated the principles and rules of international law and the UN Charter governing relations between states.

He stated that it is possible to resort to European courts to pursue Friedman. The European Court for Human Rights condemned France in June 2020 for violating freedom of expression, in response to the French courts’ condemnation of activists supporting Palestine that had called for boycotting Israeli products. Also, the Supreme Court of Justice issued a decision in November 2019, dictating the European Union countries to label settlement products.