Faced with the International Criminal Court's decision to investigate Israel’s behavior in Palestinian territories, Israel has few tools other than hollow and abusive comments about the prosecutor. 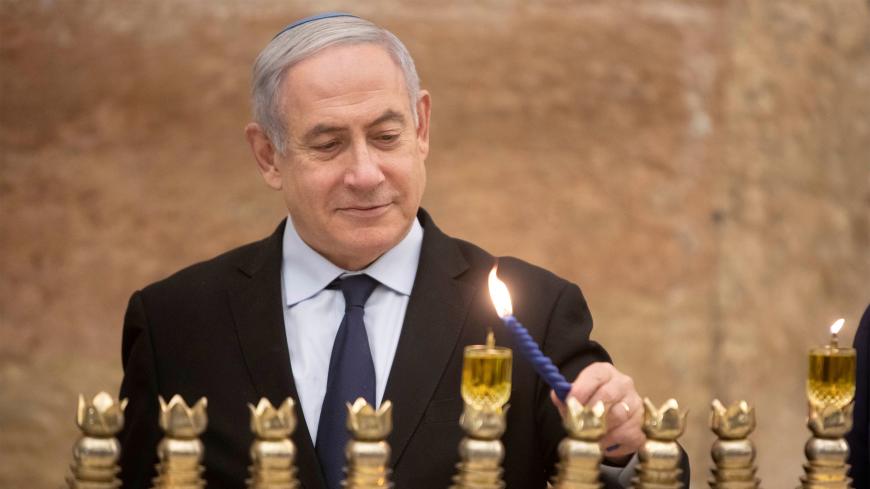 Santa came early this year, bringing a special present to the caretaker prime minister of Israel. Rather than donning his traditional red and whites, Santa appeared as Fatou Bensouda, the chief prosecutor of the International Criminal Court (ICC) in The Hague, who announced on Dec. 20 that there is sufficient evidence to investigate alleged Israeli war crimes in the West Bank, East Jerusalem and the Gaza Strip, territories it has occupied since 1967.

For Prime Minister Benjamin Netanyahu, the timing was a Hanukkah miracle. Just days ahead of the primaries for the leadership of his Likud party [scheduled for Dec. 26] and less than three months before the March 2 general elections, Bensouda gave Netanyahu a golden opportunity. When masses of Israeli voters watched Netanyahu storm the bastions of The Hague, they saw their savior, a Jewish David challenging an international Goliath. His main political rival, Blue and White chair Benny Gantz, had no place in the scene.

The ICC, Netanyahu stated at the start of the weekly cabinet meeting on Dec. 22, has been turned into “a weapon in the political war against the State of Israel.” But the West Bank and Gaza Strip are not part of the state. Has Israel secretly imposed sovereignty on the West Bank town of Nablus and the Gaza refugee camp of Jabalia? And what about East Jerusalem? Even President Donald Trump, Israel’s best friend, did not recognize Israel’s annexation of the Shouafat refugee camp in East Jerusalem.

Thanks to Bensouda, Netanyahu took the opportunity to align himself with Attorney General Avichai Mandelblit, who has just indicted him on charges of corruption. The interim prime minister has adopted his position that the ICC only has jurisdiction in petitions filed by sovereign states and “a sovereign Palestinian State does not exist … and the Palestinian entity manifestly fails to meet the criteria for statehood under general international law.”

And why does a Palestinian state not exist? Inter alia, because Netanyahu and his right-wing government colleagues have spared no effort to prevent its establishment. They are vying with each other to make the loudest declarations about annexing Palestinian territory, who can expropriate the most Palestinian land and build the most Jewish settlements.

Palestine is a state. Although a UN observer state since 2012, once its status as a state was recognized for accession to the Rome Statute (the basis for the ICC), it was clear that the court would acquiesce to its demand to probe Israeli conduct in the occupied territories.

Israel’s reliance on agreements with the Palestinians as a basis for resolution of disputes between the sides is a cynical legal-political tool. For years, European states that hold sway over the ICC heeded Israeli arguments that the court’s intervention would undermine peace negotiations with the Palestinians. Currently, not a single state is likely to use this argument to delay proceedings against Israel. It does not mesh with declarations by politicians in Jerusalem about the death of the Oslo peace accords and with unilateral Israeli punitive measures against the Palestinians, such as withholding tax money due to the Palestinian Authority. Israel’s decision or intention to annex the West Bank’s Jordan Valley, mentioned in the ICC statement, clearly contradicts the Oslo Accords, which reject unilateral measures that could affect the permanent status of the territories.

The focus on legal arguments marginalizes the fundamental issue: Why does the state of a people who have been victims of war crimes and of the worst crimes against humanity in modern history, refuse to accede to the ICC, established to combat war crimes? After all, Netanyahu himself noted at the start of the cabinet meeting that the ICC “was established after the horrors of World War II, mainly the horrors that were inflicted on our people.” The reason, other than the settlements’ issue, is concern that membership in the ICC would limit the IDF’s room to maneuver as well as that of the current and former heads of Israel’s security agencies. Members of the ICC are committed to honor the arrest warrants it issues and to stop and extradite suspects within their borders. Netanyahu’s mention of the circumstances under which the court was established was designed to taunt the important institution.

The ICC numbers 123 member states (counting Palestine), among them almost all the countries of Europe and South America. The small group of Rome Statute rejectionists includes, in addition to Israel, the United States, Russia, China, Turkey, India and most states in the Middle East. In April 2019, on the eve of Bensouda’s request to launch an investigation into war crimes committed in Afghanistan in 2003 and 2004, the Trump administration revoked her entry visa to the United States. After a panel of pre-trial judges rejected her proposed investigation, Trump threatened that future “attempt to target American, Israeli or allied personnel for prosecution will be met with a swift and vigorous response.” During the Barack Obama administration, and more so under Trump, various congressional legislation initiatives were proposed, threatening US action against the ICC should it act against Israel. Officials in Jerusalem hope the 2020 Knesset elections and the presidential election in the United States will accelerate Trump’s “swift and vigorous response” against the ICC.

People who know Bensouda tell Al-Monitor she is a cautious, even hesitant prosecutor. Her decision to move ahead against Israel (and Hamas), albeit slowly, suggests she is undeterred by Trump’s threats. That said, Israel has few resources for dealing with the ICC, other than hollow words and abusive remarks against the prosecutor and populist accusations against the court, such as Netanyahu’s claim that the ICC was being used as a “political weapon” against Israel. Similar Israeli responses followed the Palestinian upgrade to the status of a UN observer state, membership in the ICC and the petition that led Bensouda to take action.

“The court is recognized as an institution that includes professional jurists,” wrote Col. (res.) Pnina Sharvit Baruch, former head of the IDF’s international law department, in January 2015 after Bensouda’s decision on a preliminary inquiry into Palestinian allegations of Israeli war crimes. In a position paper on the website of the Institute for National Security Studies, attorney Sharvit Baruch warned against condemnations of the court. “At best, they portray Israel as irresponsible, and at worst, as a state that believes it has committed war crimes and fears being caught,” she wrote, adding, “Harsh responses, even if they are related to the election campaign in Israel, are not the correct path.”

That wisdom holds just as true as the world heads into 2020, Israel prepares for March elections and the court has decided the case against Israel has merit.