Instead of standing clearly by the Palestinians, demanding the implementation of international law in the West Bank and recognizing the 1967 borders, Europe stands on the sidelines. 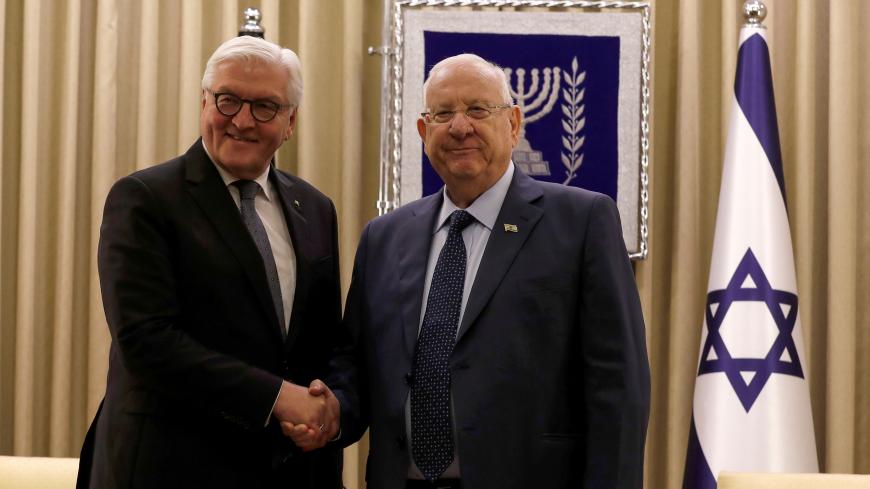 Opinion polls indicate that it would be unwise to place a bet on March 2 as the date Israeli television channels air the final episode of the popular reality show, “The story of a permanent interim government." With the opening date of Prime Minister Benjamin Netanyahu’s trial on charges of corruption set for March 17, Israel could become the world’s first democracy whose leader splits his time between Cabinet sessions and court sessions. The serial elections — with the third looming on March 2 — not only help Netanyahu’s Likud party hold on to power, they delay the annexation of the West Bank settlements based on US President Donald Trump’s “deal of the century” for Israeli-Palestinian peace.

The back-to-back elections also enable opponents of the plan — chief among them the European Union (EU) and leading European states — to continue hemming and hawing and dozing in the bleachers. EU foreign ministers who met Feb. 17 to discuss the Trump plan and recognition of a Palestinian state decided to postpone their discussion until after next month’s Israeli elections. “We briefly discussed how best to relaunch a political process … and how best to defend internationally agreed parameters of equal rights and international law,” the ministers’ communique stated. How do they know that Israel will have an elected government next month? How can they be sure that if Blue and White leader Benny Gantz heads the next government rather than Netanyahu, he will have sufficient Knesset votes to impose the principles of “protecting equal rights and international law” in the occupied territories?

Haaretz wrote Feb. 17 that the European proposal on recognition of a Palestinian state was instigated by the foreign ministers of France, Belgium, Spain, Ireland, Portugal, Finland, Sweden, Luxembourg, Malta and Slovenia. Even as their initiative was introduced, a group of European states signed on to a completely contradictory initiative. Germany, the Czech Republic, Austria and Hungary, in addition to Uganda, Australia and Brazil, filed briefs with the International Criminal Court (ICC) in The Hague seeking to be recognized as “friends of the court” in order to argue that the tribunal does not have jurisdiction to try Israel on war crimes charges allegedly perpetuated in the occupied territories. One of the main arguments of the “friends” is that the court is only authorized to adjudicate events occurring in sovereign states, whereas the West Bank and East Jerusalem are occupied territories, not part of sovereign Israel. In other words, even as France is seeking to bring the occupation to an end, Germany is trying to perpetuate it.

Israel mobilized the support of Germany and the other states that have taken a stand on the matter following the December 2019 ruling by ICC Prosecutor Fatou Bensouda that there was “reasonable basis” to investigate alleged war crimes in Palestinian territories (not only by Israel). Since Israel is not a signatory of the Rome Statute, under which the ICC was established, Israel’s attorney general is not authorized to intervene in the matter directly. Instead, in addition to the help of foreign diplomats, the attorney general is being aided by Israeli and Jewish right-wing organizations, and even the Israel Bar Association. The Palestinians, on the other hand, are supported by organizations such as the Organization of Islamic Cooperation (OIC) and opinions of leading international legal scholars.

Perhaps the most surprising and important such opinion filed with the court was penned by Eyal Benvenisti of Cambridge University, known for his strong advocacy of left-wing positions. The Israeli expert on international law argued that the ICC does not have jurisdiction regarding occupied territories. His central argument will undoubtedly please right-wing circles. According to Benvenisti, the application for admission to the United Nations submitted in September 2011 by Palestinian President Mahmoud Abbas and the September 2018 petition to Israel’s High Court of Justice against the relocation of the US Embassy to Jerusalem are based, inter alia, on UN Resolution 181 of 1947.

In a May 2011 Haaretz article, Benvenisti enthused over Abbas’ declaration in a New York Times op-ed of his intention to seek UN membership for a Palestinian state within the 1967 borders, saying his commitment would likely be binding on a future Palestinian state. Benvenisti added that Israel would have to discuss its response to the Palestinian state initiative “based on the new legal facts created by publication of Abbas’s article.”

However, when Abbas submitted the actual membership application to the UN later that same year, Benvenisti was both surprised and disappointed to find that it invoked UN Resolution 181, which set out Israel’s 1947 borders — not the much longer 1967 ones. That, he told Al-Monitor in an interview this week, indicates ambiguity regarding the Palestinian position on the borders of their desired state. “Suddenly we learned that it is not clear that the 1967 borders are binding and that the Partition Plan [Resolution 181] is alive and kicking,” the senior jurist said. According to Benvenisti, if Hamas or even the PLO assume power in a future Palestinian state, legally speaking they will not be bound to adhere to the 1967 borders.

It should be noted that the most substantive dispute between Hamas and the Palestinian Authority lies in Abbas’ adherence to the two-state solution based on the 1967 borders — a principle that enjoys the consistent backing of the Arab League and the OIC. The Palestinian Constitution — as well as a long list of resolutions, documents and speeches, including the 2002 Arab Peace Initiative — emphasize that the two-state solution within the 1967 borders is the sole and desired solution to the conflict. However, these facts do not sway the Israeli expert. “Politicians and historians can describe growing willingness for concessions,” Benvenisti claimed. “The law has formal demands that are necessary to ensure the stability of borders even after regime changes.”

The solution, as he sees it, lies in formal clarification by the Palestinians to the UN that the borders between Israel and Palestine will be based on the 1967 lines. “From here they can continue successfully to argue their petition [on alleged Israeli war crimes] before the ICC,” Benvenisti stated. Then, perhaps, it will be time for the international community led by enlightened European states to demand that Israel present the borders that it proposes — without waiting for the Messiah or a left-wing government, whichever comes first.