US Secretary of State Mike Pompeo's recent statement on the West Bank settlements reinforces the occupation policy of Prime Minister Benjamin Netanyahu and distances any chance for peace. 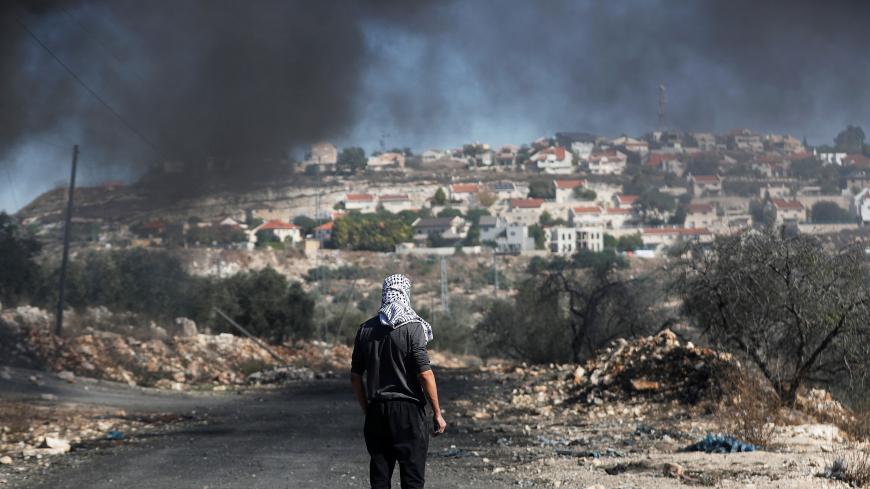 A Palestinian demonstrator stands near the Jewish settlement of Qadomem during a protest against Jewish settlements in Kofr Qadom, in the Israeli-occupied West Bank, Nov. 22, 2019. - REUTERS/Mohamad Torokman

“Israel’s legal system, which has proven itself fully capable of addressing legal questions … is the appropriate place for these matters to be adjudicated,” Prime Minister Benjamin Netanyahu declared Nov. 18. No, these “issues” do not relate to his criminal indictments for bribery, fraud and breach of trust. His praise for the country’s legal system was part of an enthusiastic reaction to the Nov. 18 declaration by US Secretary of State Mike Pompeo that legal questions regarding Israel’s settlements are a matter for Israeli courts and not for international law to decide.

Indeed, generations of police officers, prosecutors and judges have proven to be an integral element in the settlement enterprise over the past 52 years. They are part of that same legal system that Netanyahu and his associates now claim is unfit to handle the prime minister’s criminal investigations. Just like the three indictments detailing a multitude of violations of Israeli law, Netanyahu considers the claim that the settlement enterprise violates international law to be false.

That is not the view of top legal experts and jurists in the world and in Israel, among them Theodore Meron, the Foreign Ministry’s legal adviser in the late 1960s who wrote a top-secret opinion in 1967 saying the Fourth Geneva Convention applied to Israeli activities in the territories it had just captured and took precedence over the British-era 1945 emergency defense regulations on which the state relies to this day. In a 1991 petition to the Supreme Court, the anti-settlement movement Peace Now challenged the legality of the settlements. Even the justices of the country’s top court did not dare rule they were legal.

Cambridge University law professor Eyal Benvenisti goes as far as to argue that the US declaration itself is illegal since all the signatories of the Geneva Convention are committed to preserving its integrity. Speaking with Al-Monitor, Benvenisti said Pompeo’s declaration does not appear to have binding status in international law. “Even if it did,” Benvenisti, added, “It cannot change a thing in itself.” He argued that the political circumstances of the declaration — the administration’s desire to help the leader of the Likud — as well as the broad international consensus rejecting it limit its impact.

Attorney Michael Sfard, the legal adviser of the anti-occupation Yesh Din who specializes in legal issues concerning the occupied territories, agrees with him. He pointed out that Pompeo’s declaration was not underpinned by any legal opinion explaining why findings of the settlements’ illegality, backed by a very rare international consensus of virtually all world states and international law experts, are false. “While the declaration will not change the legal situation,” Sfard told Al-Monitor, he warned that unless it is revoked soon, it will entrench Israel’s rejection of territorial compromise, which is already undermining a solution to the Israeli-Palestinian conflict.

It is hard to understand how the declaration encouraging the Israeli settlement enterprise in the West Bank lines up with Pompeo’s insistence that “The United States remains deeply committed to helping facilitate peace.” Even the State Department itself does not seem to believe that the Palestinian side has understood the connection between the legitimization of the settlements and the commitment to advance peace, as the next day a security alert was issued by the US Embassy in Israel calling on Americans to exercise “a high level of vigilance” in traveling to Jerusalem, the West Bank and Gaza Strip.

Hagit Ofran, head of the Peace Now’s settlement monitoring department, wrote in a Nov. 18 Facebook post that President Donald Trump had provided the final piece of the puzzle that he has dubbed “the deal of the century,” which turns out to be a deal to eliminate the two-state solution. In the wake of the May 2018 move of the US Embassy to Jerusalem, which rules out any possibility of the city serving as the capital of both the Israeli and the Palestinian states, and the halt of US assistance to UNRWA in a bid to remove the refugee issue from the agenda, the American president was now paving the way for legalization of the settlements and sabotaging prospects of a territorial compromise. International law has not stopped successive Israeli governments from building dozens of settlements and outposts in the occupied territories over the past 52 years, many of them under the misleading guise of security needs.

However, if, as the United States stipulates, Israel is allowed to build anywhere it wants in the West Bank, why are the Palestinians prohibited from expanding their living area? The answer to this absurdity lies in the Oslo Accords, those same peace agreements over which the political right incited against Prime Minister Yitzhak Rabin until he was assassinated 24 years ago this month. In the 1995 Israeli-Palestinian agreement known as Oslo II, designed to serve as an interim arrangement for five years, the Palestinians agreed that Israel would maintain civilian and security authority in Area C, which constitutes 60% of the West Bank. A year went by, and then another; a Palestinian uprising erupted and then another; another Israeli outpost bloomed; another Israeli government came and another US administration went, and the temporary became permanent.

The Palestinian Authority often appears determined to extricate itself from the bind of the Oslo Accords. For example, in response to Israel’s home demolitions earlier this year in territory under PA control in the Jerusalem neighborhood of Sur Baher, Palestinian President Mahmoud Abbas announced in July that the PA would no longer adhere to the 1993 Oslo Accords with Israel. Some two months on, the PA issued a dramatic statement saying it had decided to ignore the division of the West Bank into Areas A, B and C (A being under total PA control and B under mixed Israeli-Palestinian control) and to treat the entire West Bank area as one territory under Palestinian sovereignty. These declarations fell by the wayside, as did the multitude of Palestinian declarations on establishing a Palestinian unity government.

As Pompeo rightly noted, the settlements are a complex political issue that can only be resolved through negotiations between Israel and the Palestinians. However, the chances of Netanyahu launching negotiations with Abbas on a peace deal that would extricate Israel from the morass of the settlements are lower than the chances of Netanyahu opening talks with the prosecution over a deal that would keep him from prison.